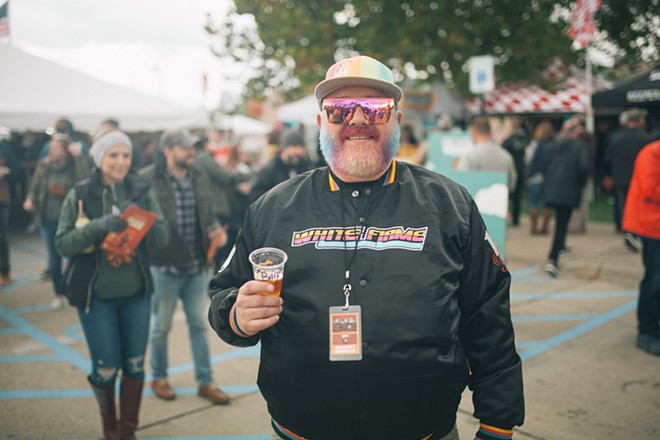 Fall isn’t just about pumpkin spice lattes and apple cider. Sometimes it’s about deep umber, smoky stouts, with an overload of whopping malt and just a touch of creaminess. Maybe it’s about settling into the cold weather months clutching a mug of chocolatey, dry-hopped, Imperial Something.

In other words, step aside “crushable” and “session” beers. Now is the time for silky stouts and velvety porters, creamy IPAs, and other warm fuzzy beers.

So says Scott Graham, executive director of the Michigan Brewers Guild. At this year’s Michigan Brewers Guild Fall Beer Festival, held at Eastern Market on Saturday, Oct. 22, the name of the day is “hefty.” Think hopped-up New England IPAs, Belgian tripels and Scotch Wee Heavy ales. Traditional style ales, harvest ales and fresh- or wet-hopped beers — those made from recently harvested hops bursting with flavor — will dominate the seasonal festival’s offerings, says Graham. “We’ll see plenty of Oktoberfests and a trend away from lighter beers and wheat beers. It may not be imperial stout and bock season just yet,” he says, “but it is going to trend a little heavier. And, of course, many many, many variations of IPA.”

That’s good news for hop lovers of all stripes. Graham expects hundreds of different beers from dozens of breweries from all over Michigan. The festival has been held at Eastern Market for 13 years and is the only one of the four festivals put on in Detroit by the nonprofit Brewers Guild.

Graham and his team are always happy to come to Detroit, he says, because “part of the fun is that there'll be breweries that maybe you can’t get to geographically, or they’re new, and so you can try their beers too. I’m looking forward to being back in Detroit. It's always got a different character.”

One newcomer to the festival is Oak Park’s Unexpected Craft Brewing Company, which just opened last October. Co-owner and head brewer Edward Stencel is excited to bring his signature Peanut Butter Stencel Stout, a crowd favorite both at the new brewery and at his previous business, Dearborn’s River Rouge Brewing Company. Stencel promises a mix of the brewery’s classic lineup of stouts, porters, IPAs, and other familiar beers, as well as a few surprises for beer drinkers who might not be familiar with UCBC yet.

For Stencel, Detroit’s Fall Beer festival is one of his favorites. Raised in Livonia and a graduate of the University of Michigan-Dearborn, he honed his craft in San Diego but was thrilled to return to his home state to build his business. “I've been to a lot of festivals and been in a lot of beer communities around the country and around the world,” he says, “and one thing that sets Michigan beer drinkers apart is their loyalty to their local beer. I mean, they go out, they seek, they support local beer.”

Michiganders at the festival will have plenty of opportunities to sample the offerings of Michigan breweries large and small from all over the state. One thing sippers won’t find, says Grahan, is industrially-produced and tasteless beers. Says Scott, “Maybe you think you don't like beer, but there are hundreds of different flavor variations. There's so much more than yellow, fizzy industrial beer that it can really be a fun experience for somebody who doesn't feel like they have much experience with local beer. And at the same time, it's a great experience for somebody who does feel more sophisticated or more experienced to meet other folks.”

The Michigan Brewers Guild Detroit Fall Beer Festival is from 1-6 p.m. on Saturday, Oct. 22 at Eastern Market; mibeer.com. Tickets are $55 per person in advance, $65 day of.