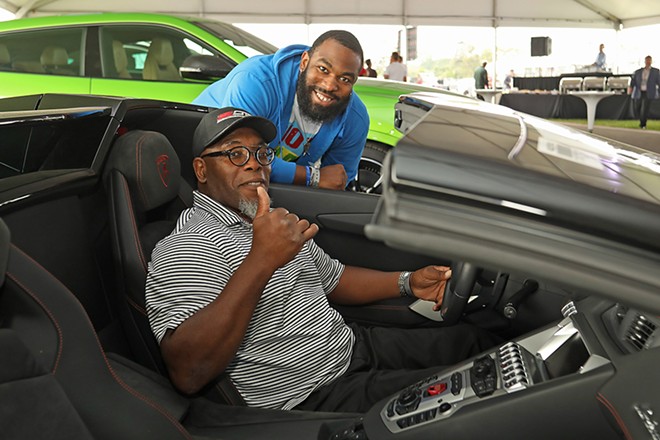 Courtesy photo
Guests test out a new car at a NAIAS event.

After a two-year hiatus due to the pandemic, the North American International Auto Show (NAIAS) returns to downtown Detroit this September, ushering in a new season for one of Detroit’s largest events — literally.

Since 1989, NAIAS has taken over Huntington Place (briefly TCF Center and formerly Cobo Hall) every January for one of the largest international auto shows in the world.

In 2018, a new plan was announced to move NAIAS from the frigid Detroit January to the much warmer June, with an anticipated date of the switch happening in 2020.

The following year, rumors swirled about what a summer auto show could look like as organizers prepared for their final winter event.

Then the pandemic happened.

In 2022, the NAIAS will finally get to show everyone all the changes when the public show opens on Sept. 17. One thing many will notice is a new logo that prominently features the word “Detroit,” as NAIAS is branding the event the Detroit Auto Show, like it was prior to 1989.

Attendees can expect to see the latest auto technology with an emphasis on electric vehicles.

“This year’s auto show plays a vitally important role in promoting emerging technologies particularly in the EV space,” Detroit Auto Show Executive Director Rod Alberts said in a press release. “And, as the first auto show of the season and with the release of new models in the fall, we expect the show to be a pivotal player in consumers’ vehicle shopping and purchase decisions.”

Keeping tradition, the auto show kicks off with the Charity Preview on Sept. 16 and will feature a performance of disco pioneers Nile Rodgers and Chic, known for their 1978 hit “Le Freak.”

The family-friendly affair will feature interactive attractions for children, including Fred Flintstone’s “Flintmobile” and an electric Monster Truck. Not to mention the world’s largest rubber duck, a nod to not only Michigan’s Great Lakes, but Jeep owners as well (#duckduckjeep).

The Detroit Auto Show is not just about vehicles that are on the ground, they will include those in the air. The new “Air Mobility Experience” will feature flight displays and demonstrations by six International flight mobility companies.

“We are thrilled to showcase AIR ONE, the sportscar of the sky, at an event as truly iconic as this,” said Rani Plaut, CEO and co-founder of the Tel-Aviv based company AIR, in a statement. “The Detroit Auto Show both inspires and embraces innovation and ingenuity, and we are excited to give automotive enthusiasts a look at a not-so-distant future when flying will be as easy as driving.”