After two years of livestreaming, the festival is jazzed to be back with in-person performances 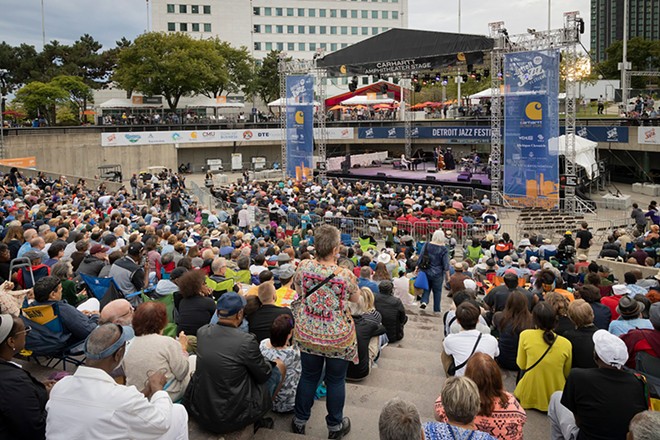 Courtesy photo
The Detroit Jazz Festival switched to a livestream format amid the pandemic. It’s back in-person for the first time since this year.

Over the past two years, music festivals everywhere were canceled because of the COVID-19 pandemic. Some managed to keep going. The Detroit Jazz Festival was one that absolutely refused to let down its fanbase, taking a colossal risk switching to a virtual format by livestreaming its performances in the place of its typical gathering downtown.

According to Chris Collins, the Detroit Jazz Festival Foundation's president and artistic director, the gamble worked. A whopping 1 million people viewed the livestream, and the following year that number doubled.

Livestreaming has broadened the festival’s reach; still nothing compares to experiencing it live. Beginning Sept. 2, the festival returns to its in-person roots, though it will also double down on livestreaming. People can again hit Campus Martius and Hart Plaza to experience top-tier jazz artists, but Collins says they are also offering free admission to the world in real-time on all four stages via the festival’s website, YouTube page, and Facebook page.

"There's no charge, there's no subscription fee or anything," he says. "We wanted this to be a gift to everybody and an extension of the free jazz for everybody. Everybody should have access to this music."

His participation is an example of how Collins exposes the festival’s audiences to global jazz artists and ensembles.

"We are, as you know, a true jazz festival," says Collins. "The center of the art is where we live. But there's so many branches and we wanted to seek out this past year of following up on leads and bringing in artists who have new voices on the scene, still jazz language and traditional foundations, but taking it in a direction that is commensurate with their generation and their life."

The festival is also continuing its homecoming series, which brings longtime artists from the city back to their roots to perform. Some of the homecoming series artists include saxophonist Charles McPherson, saxophonist JD Allen, and Reeves, who is a native of Detroit.

Some of our other must-see performances include:

London-bred tenor saxophonist Nubya Garcia is one to watch in jazz today. Her sound, as described by The Guardian, is "soulful, with enough controlled brawn in her tone to evoke a touchstone like Sonny Rollins." Garcia released her debut album Source in 2020 to astounding reviews and has a clever way of combining slick improvisational skills with electronic vibes, hip-hop, and melodic grooves that will have your ears itching for more. You can catch her at 7:45 p.m. on Sunday on the Absopure Waterfront Stage.

Jose James — Yesterday I had the Blues: The Music of Billie Holiday

There are tons of covers of Billie Holiday classic tunes, but few really stand out when it comes to texture, feeling, and breadth. Jose James' homage to the jazz and blues singer hits every note. James gracefully takes listeners on a journey through "Good Morning Heartache," "Lover Man," and "God Bless the Child" with a neo-soul touch. Hearing him sing the album live will be a sweet treat for any devoted jazz fan. You can check him out on the JPMoran Chase Stage at 4 p.m. on Sunday.


Emmet Cohen is another young innovator that is making waves in the jazz industry. His latest album Future Stride, composed of the classic stride tradition, is a perfect example of how he seamlessly marries the vintage and the modern, and in so doing attracts a diverse group of enthusiasts. He will be joined by his signature trio featuring bassist Russell Hall and drummer Kyle Poole at 5:45 p.m. on Monday at the Pyramid Stage.

An NEA Jazz Master and legend in his own right, pianist Abdullah Ibrahim is an innovator in incorporating South African rhythms, jazz, and religious influences into his music. Seeing him in his element is definitely a remarkable sight for those lucky enough to witness the 87 year-old do his thing on the bandstand. He will be performing with his band Ekaya at 8 p.m. on Saturday on the JPMorgan Chase Stage.

This all-female septet is an awe-inspiring group of distinguished musicians. When they come together, pure magic results. They first performed together at the 2018 Newport Jazz Festival and were then signed to Blue Note Records, where they recorded their self-titled debut in 2020. Just seeing them perform covers like Lee Morgan's "The Sidewinder" or their original "Goddess of the Hunt" based on their namesake, you will become hooked. They take the Carhartt stage at 4 p.m. on Monday.

And as far as local acts:

If you've never seen violinist and violist Leslie DeShazor in action, then the Detroit Jazz Fest is where you want to be this weekend. DeShazor is making her debut as a solo artist, after having performed for the festival's string orchestra for many years. She says she loved being a part of the string section, but thought it was time for her to have some autonomy in her career and make her own artistic decisions. "I've shied away from taking up my own project a lot over the years, mostly for fear of it not being good enough," says DeShazor. "During the pandemic I started writing with the goal of releasing a project and it's been a really eye opening experience." She released her first album Journey with Me in 2021 and is electrifying on strings. She brings to life original compositions full of slick grooves and upbeat instrumentation. This time around she will be front and center, backed by her own band, and will be the main attraction with her viola in hand. You may even hear some vocals from her as well. DeShazor performs at 3:45 p.m. on Sunday on the Absopure Waterfront stage.

As one of the young lions on the Detroit jazz scene, trumpeter Allen Dennard can hold his own when it comes to performing with local and national artists alike. He was one of many lucky cats who was mentored by the late, great Marcus Belgrave and has since then continued to hone his craft on the instrument, leading a number of bands including his quintet who many will see at the festival at 2 p.m. on Sunday on the JPMorgan Chase Main stage.

In 2020, multi-instrumentalist Raphael Lafear was chosen as a Kresge Film and Music Artist Fellow. His fire-spitting improvisational skills on the sax have taken him far, and he's a mainstay in the city when it comes to his own band or linking up with other musicians as part of their performances. His John Coltrane-esque licks will keep everyone on their toes when he performs at 5:45 p.m. on Sunday on the Absopure Waterfront stage.

Singer-songwriter Anissa Lea is a fresh voice in the city who gives off echoes of Amy Winehouse with her edgy vocals. She is creating a name for herself by taking contemporary pop and jazz standards and making them her own. She will be performing tunes from her self-titled debut album and may sprinkle in some jazz classics for the crowd to hover over. Her set is at 4:25 p.m. on Saturday at the Absopure Waterfront stage.

Drummer and composer Mark Lipson founded the Detroit Composers Collective in 2015 to preserve the legacy of the city's greatest jazz musicians. The group is composed of young and veteran local artists who have done justice to their ancestors through recordings, performances, and workshops. There will most definitely be a mix of Detroit jazz royalty on stage when the band hits at 2 p.m. on Saturday on the JPMorgan Chase stage.