Still nothin’ to fuck with 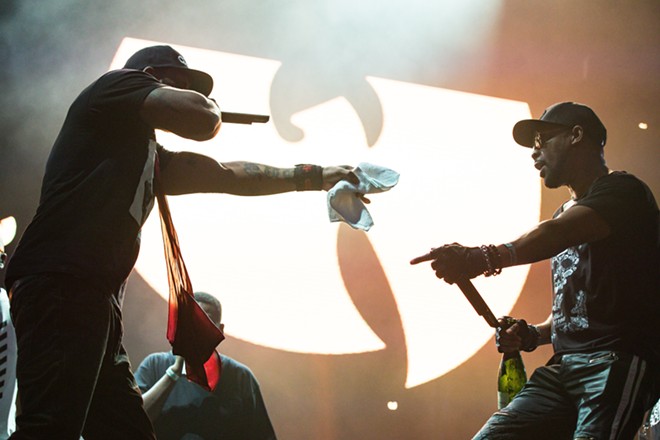 There’s hip-hop, and then there’s the Wu-Tang Clan.

For 30 years, Wu-Tang Clan has been perhaps the archetypal hip-hop group. The raucous crew from Staten Island, New York, is among the genre’s most notorious, and its members have parlayed their musical talents into a wide range of other entertainment ventures, including films, clothing lines, and even a bar. The Wu is a brand name.

And even more than a brand, Wu-Tang Clan has a fan following that could rival most cult leaders. Diehards have been tattooing the familiar “W” on their bodies for decades, and concerts still sell out.

Tickets for a planned March, 2020 concert — in which Wu-Tang Clan would perform songs from its debut album with the Detroit Symphony Orchestra as the score to the classic martial arts film The 36th Chamber of Shaolin — sold out in 15 minutes. A second show added due to popular demand sold out in under an hour. But they were shows that no one got to see, as the COVID-19 pandemic would soon put live music on pause.

We may have to wait a while to see Wu-Tang Clan and the Detroit Symphony Orchestra perform — the shows were not rescheduled — but this weekend we will get to see the full Wu-Tang Clan, along with similarly iconic rappers Nas and Busta Rhymes, perform at Pine Knob Music Theatre.

But the fact that the DSO planned to collaborate with Wu-Tang Clan shows that hip-hop is aging, gracefully. Wu-Tang Clan’s RZA is now in his 50s, as are other rap icons like Jay-Z and Diddy. As the culture ages, the culture changes.

“Hip-hop culture has so many thresholds that we haven’t crossed yet,” says RZA. “How do we, as a culture, accept the new artists who are bringing in energy, as well as accept the older artists who pioneered it? Rock ’n’ roll was able to do that already. We as hip-hop have to figure out how to do that for our artists and our culture.”

The RZA is the de facto leader of the Wu-Tang Clan — a rapper, film director, business executive, author, and one of the greatest music producers of all time. The Wu-Tang Clan emerged out of his vision, and it is through that vision that the group continues to evolve.

The proposed collaboration with the Detroit Symphony Orchestra was to be the manifestation of a long-held vision of RZA’s. It started at the Coachella Music Festival in 2013, when the group collaborated with a small orchestra. “Combining film, hip-hop, orchestration, and to do it in a different type of setting, it was an evolution of something I was looking forward to for a long time,” he says. “These shows are just another way of translating hip-hop. You don’t have to just be in a club, drinking liquor, you can actually have a mature experience of hip-hop and still get the energy that hip-hop brings. I think it is a natural evolution.”

“Method Man loves comic books, so we made a comic book,” he says. “We all bring so many different things to the music. We were able to fuse Asian culture, martial art culture, comic book culture, science and mathematics, as well as just basic street hip-hop hood culture.” In this diversity, Wu-Tang Clan has found longevity.

“Think about the Impossible Burger for example,” RZA, a long-time vegan, explains, “It’s not just sold at Burger King. It’s at White Castle, and even more restaurants. It’s spreading a plant-based lifestyle in multiple arenas. At one point, Wu-Tang had all five major labels selling our hip-hop, which fueled the income for them to go back and invest in more hip-hop.”

He adds, “Hip-hop was labeled a youth culture, but it is really just a life culture,” RZA says. “It is American culture, world culture, and it still has a long way to go.”

Meanwhile, Nas has been leading the charge to celebrate the upcoming 50th anniversary of hip-hop music and culture with a documentary soon to air on Showtime, along with music releases and more coming out of his multi-media brand, Mass Appeal.

Busta Rhymes has also been touring and sharing his legendary hip-hop stories through appearances on the Drink Champs podcast and more.

The past few years have been hard for touring. The Pine Knob show is not what we would have gotten from Wu-Tang Clan and the DSO, but it is the show we need now. A big gathering of hip-hop heads at the end of summer with some of our favorite artists looking and sounding great to remind us that while we may have been through a lot, just like hip-hop culture, we are still standing and still strong.