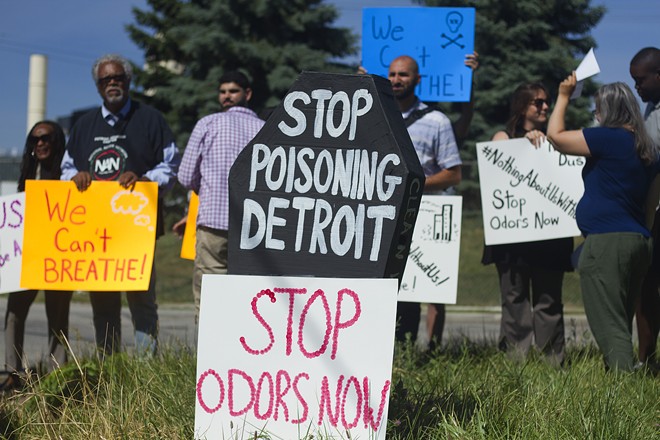 For more than a year, a pungent and nauseating odor has wafted from the new Jeep assembly plant, sickening residents on Detroit’s east side.

Despite five air quality violations from state regulators since September 2021, auto company Stellantis continues to operate the plant without making any meaningful changes.

Five miles away, Detoiters living near U.S. Ecology’s hazardous-waste processing plant at E. Kirby and St. Aubin streets are inundated with dust, pollution, and noise. Even though the plant has received two dozen violation notices for environmental contamination since 2014, it has been allowed to continue operating and plans to expand operations.

The Committee on Oversight and Reform hearing was intended to examine the gaps in current laws and regulations that leave frontline communities vulnerable to pollution. Seven witnesses, including residents and environmentalists, spoke out about the disparate impact on communities of color.

“Our current environmental permitting and enforcement systems are sacrificing Black, brown, and immigrant and low-income, working-class communities for the profits of U.S. polluters,” Tlaib said. “We have an urgent and moral duty to build new systems and structures that put our health and environment first.”

Pollution is a widespread problem in the majority-Black city of Detroit. The University of Michigan School of Public Health estimates that air pollution kills more than 650 Detroiters a year — more than twice the number of residents killed by gun violence annually. Thousands more are hospitalized, and children miss a disproportionate number of days at school because of illnesses and asthma.

Numerous studies have shown that Black communities nationwide are disproportionately exposed to industrial air pollution. African-Americans, for example, are 75% more likely to live near industrial facilities than white people, according to "Fumes Across the Fence-Line," a 2017 study by the National Medical Association, the Clean Air Task Force, and the National Association for the Advancement of Colored People. The study estimates that nearly 2,500 children a year in Detroit have asthma attacks linked to air pollution.

Over the last year, Robert Shobe has lived with the constant reminder of what it’s like to live near Stellantis’s stench-spewing Jeep assembly plant.

“This plant is making us sick,” Shobe testified. “I am a cancer patient and am physically disabled. I suffer from COPD (chronic obstructive pulmonary disease). When the smell comes down around my house, my eyes burn. I have a cough from smelling the paint. I feel a tightness in my chest. I’ve gotten headaches from the smell, and I’ve been living as a prisoner in my own house for over a year.”


The University of Michigan School of Public Health estimates that air pollution kills more than 650 Detroiters a year — more than twice the number of residents killed by gun violence annually.

Despite filing complaints and demanding an end to the stench, Shobe said Stellantis has done nothing meaningful to address the smell. He questioned why the Michigan Department of Environment, Great Lakes and Energy (EGLE) has allowed the plant to continue operating when a predominantly Black community is suffering.

Shobe encouraged the committee to create tougher environmental standards that “have consideration for human life and quality of life.”

Pamela McGhee lives several blocks from U.S. Ecology’s hazardous-waste processing plant, which has a troubling history of environmental violations. In 1954, her parents bought a house in the area before U.S. Ecology and other plants operated in the area.

Environmental justice advocates said Congress can take several meaningful steps to reduce pollution facing frontline communities. One of the main problems, they said, is that regulators allow each pollution-spewing facility to emit a certain amount of contaminants, regardless of the level of toxins already in the air from adjacent factories.

That approach lacks common sense and poses serious risks to communities in Detroit that have numerous polluters in a small area, the advocates said.

Regulators should also consider race as a factor in determining whether to allow emissions of contaminants so that predominantly Black communities are no longer choked out by a disproportionate amount of emissions.

Another solution, they said, is empowering communities to have a substantive say in what goes on in their backyards.

“We have to do everything within our power to protect environmental justice communities to speak for themselves,” Jamesa Johnson-Greer, executive director of the Michigan Environmental Justice Coalition, testified. “Early and meaningful participation of communities to weigh in on how a project will impact them is critical. This should not be taken away in the name of expediting projects.”

Nick Leonard, executive director of the Great Lakes Environmental Law Center, encouraged Congress to take action soon because the problem will only get worse.

“These incidents of environmental injustice are a legacy of our nation’s really horrid policies regarding race and intentional race-based discrimination,” Leonard said. “Unless we take really strong, decisive, affirmative action, it’s going to be our legacy as well. If we don’t take that kind of action, then the next generation of activists and the next generation of congressional representatives will be here talking about the same thing, working on the same issues.”