‘Detroit 442’: the new wave band rolls into the Fox Theatre on Friday 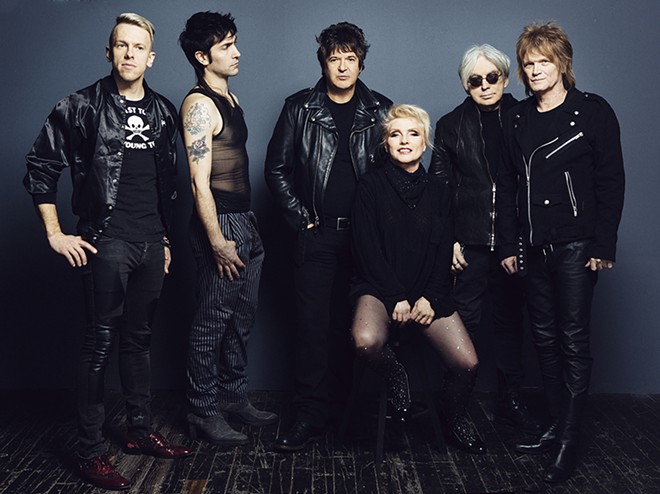 For new wave veterans Blondie, 2022 has been a year of making up for lost time.

The band rolls into Detroit’s Fox Theatre on Friday with spooky punk legends the Damned. They’re fresh off of a U.K. co-headlining tour with Johnny Marr and a triumphant performance at the Cruel World festival in California, where they joined a who’s who of vintage alternative acts.

“Since the intensity of the pandemic slipped away, we’ve been going full blast,” says drummer Clem Burke by phone from Los Angeles.

After the U.K. tour, the band went into the studio to record tracks for its first new studio album since 2017’s Pollinator, which is expected to be released in the spring. The new album is part of a flurry of work that was sidelined by the COVID-19 pandemic.

Co-founded by singer Debbie Harry and guitarist Chris Stein in 1974, Blondie was an integral part of New York’s fecund punk scene. But the group’s approach — combining lush pop sensibility with the au courant sounds of electronic music, disco, reggae, and rap — was always bigger than any constricting genre labels.

The band scored big hit singles with “Heart of Glass,” “Call Me,” “Rapture,” and “The Tide is High” before taking a 15-year hiatus in 1982. Even with that impressive CV, continuing to make new music is important, Burke says, because Blondie works hard to avoid being pigeonholed as a strictly nostalgia act.

“I mean, Debbie in particular is not big at looking back,” Burke says. “That’s why, when we got back together in the late ’90s, the agenda was to make a new record, when we did that record No Exit. We never wanted to come back and just start playing the hits, without new music.”

But even as Blondie plots a new album, the band has been contemplating its past. The same day Blondie plays Detroit, a gargantuan new retrospective box set hits stores. Titled Against The Odds 1974-1982, the set includes the band’s first six LPs and a heaping helping of pre-hiatus rarities. The unreleased tracks are culled from demos, rehearsal tapes, B-sides, and obscure singles.

“I’m kind of interested in Blondie not as the polished band that people know them as, not as the hits.”

The set was put together by Chicago’s Numero Group, which is perhaps best known for its lavish reissues of weird obscurities. Numero co-founder Ken Shipley says the genesis of the box set was inspired by Chris Stein’s tape archive, which had been stored in his home near Woodstock.

“We went to Chris’s barn, and immediately when we opened it up, it was just like, here’s a great project,” Shipley says. “This is a massive band whose master tape archive is, for the most part, just weathering the storm out here in upstate New York.”

From that wealth of material, the best 50 songs were culled. “It was about trying to get it down to the best of it, to the most interesting, the most listenable version of it,” Shipley says.

Shipley says the band’s initial reaction was mixed, noting that some members at first didn’t like the warts-and-all approach.

“I’m kind of interested in Blondie not as the polished band that people know them as, not as the hits,” Shipley says. “A work in progress Blondie to me is a more interesting Bondie. So our initial drafts really, like, leaned on the rougher, more unpolished version of the band.”

Part of Blondie’s artistic appeal has always been the way the group digested the sounds of its milieu to make something fresh.

“The disco scene that was going on at the same time was almost more subversive and more underground than the New York rock scene in the mid ’70s,” Burke says. “Disco music was always kind of like the soundtrack in New York City simultaneously as the whole scene at CBGB and Max’s was evolving.”

Living in New York, those sounds would merge. “I think that was part of the influence of ‘Heart of Glass’ for us,” Burke says.

By releasing some Blondie music in its embryonic state, the box set shows listeners how songs “Heart of Glass” came together.

Burke cites other influences for that tune. “We thought we were experimenting with electronic music when we did ‘Heart of Glass,’ it wasn’t quote-unquote ‘a disco song’ to us,” he says. “It was kind of a combination of Kraftwerk and Donna Summer.”

Lurking beneath it all is a pop sensibility, Shipley says.

“All the girl-group flourishes, to me, were really interesting. I love how there's this kind of [Phil] Spector-esque production to some of Chris's arrangements that he is borrowing from this really early-’60s place,” Shipley says. “When you listen to some of the recordings, what makes them so magical is that you're really stripping away any of the new wave artifice.”

Working on the box set was a pleasant experience for Burke.

“It was great to hear that stuff again,” Burke says. “I don’t sit down and listen to Blondie music all the time, so yeah, to do it all in a couple of sittings was kind of nostalgic, but in a good way.”

Blondie music still evokes images of “Racing down the Bowery on a crowded afternoon,” as Harry sings on “Long Time” from Pollinator. But the world has come a long way from those heady times on New York’s Lower East Side. Burke laments the current social climate, which seems to be the antithesis of the open-minded scene that gave birth to Blondie.

“It’s just insane what's going on,” Burke says. “I don’t really want to get into politics, but … I don't know what’s happening with all these reactionary throwback sort of precedents that are being set now. It’s really terrible. Everybody should just be able to do what they want to do as long as you don’t hurt anybody else.”

On this tour, Harry and Burke will be joined by longtime guitarist Tommy Kessler and keyboardist Matt Katz-Bohen. Co-founder Chris Stein is not up for touring, so KMFDM guitarist Andee Blacksugar are filling in. Sex Pistols co-founder Glen Matlock is filling in on bass in place of Leigh Foxx, who Burke says is also sidelined by health issues.