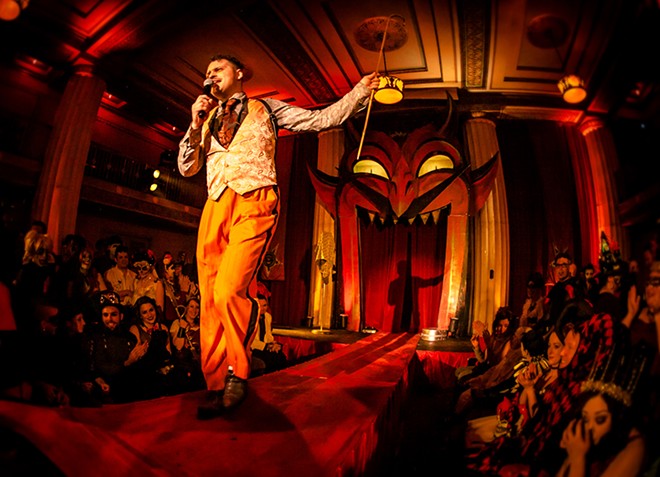 Trevor Long
Theatre Bizarre: the show must go on.

When it became apparent in 2020 that the COVID-19 pandemic was going to cause Theatre Bizarre, Detroit’s long-running Halloween festival, to be canceled, event mastermind and artist John Dunivant says he was in a strange way glad.

“Personally, it was a bit of a relief, because this event is brutal. It tears our lives apart,” he says, adding, “I have kids, and I don’t see them in October.”

Pulling off the event involves a crew of some 1,500, who transform Detroit’s Masonic Temple into a grand, gothic carnival. The event is dubbed “The Greatest Masquerade on Earth.”

Like many of us, Dunivant took time off during the pandemic to reflect on his life and priorities. He decided to cancel the festival again in 2021 due to the continued uncertainty of the pandemic. But when Dunivant talked to his crew this year, they convinced him that the show must go on.

“I was ready to let it go,” he says. “I think the excitement of so many of the crew was infectious … This crew is more than just a crew, it’s a community of friends and family. It was more the excitement of being together with everyone again, and then once that started rolling then there were other milestones of the creation process that are always exciting.”

The event is set to return for two weekends in October. Tickets for the event, including its intimate Friday night galas, go on sale this weekend. The galas are scheduled for Friday, Oct. 14 and 21, while the general admission events are Saturday, Oct. 15 and 22.

For diehard fans, a limited number of reduced-price tickets for the Saturday events is being released from 8 p.m. to midnight this Saturday. The tickets are $100 and limited to four per person, but are only available at a secret ticket booth hidden somewhere in Detroit; to find it, fans have to solve a riddle posted on Theatre Bizarre’s social media accounts. After 250 tickets for each night are sold, the price will increase to $125.

Dunivant says due to all of the events that were canceled because of the pandemic, there was pressure to share the sprawling space — Detroit’s is the largest Masonic Temple in the world — with operator AEG Presents, which entered into an exclusive operating and booking deal with the venue in 2019. This year, a Judas Priest concert is scheduled for the venue’s main stage on Saturday, Oct. 22.

Dunivant says the concert will change Theatre Bizarre’s footprint somewhat, but mostly for back-of-the-house stuff — things like security and fueling stations for the event’s fire performers, for example. On the attendee end, Dunivant believes only one hallway and a stairwell will be closed to the public.

Each year, Dunivant and the other folks behind the scenes come up with a different theme for the event, which concerns the elaborate backstory of Zombo the Clown, Theatre Bizarre’s spooky, skeletal mascot. This year, the theme is “The Call: The Wild Hunt of Saint Zombo.”

“Zombo is sort of the godlike character that oversees this world,” Dunivant explains. “And there’s a lot of narrative that has been threaded throughout this over the years. As the story continues, it’ll reflect times we’re in, it’ll reflect all sorts of different things. So coming out of a pandemic, we just sort of wanted to weave that into the mythology of the main storyline.”

The theme is based on the Wild Hunt of Odin, in which the mythological figure is joined by a group of supernatural hunters. In various European folkloric traditions, witnessing a Wild Hunt was believed to be a harbinger of a catastrophic event like a plague.

“But in our world, it is following the plague,” Dunivant says. “And Zombo is riding through the sky, calling out the dead and calling out those that are hidden or hibernating. It’s a call to gather once more.”

Dunivant has been doing Theatre Bizarre since 2000, first launching the event in Detroit’s former Michigan State Fairgrounds. In 2010, Theatre Bizarre was shut down by Detroit officials due to various zoning violations, causing the event organizers to last-minute relocate indoors to the Fillmore Theatre. The event has called the Masonic Temple home since 2011.

After all these years, Dunivant maintains that Theatre Bizarre is peerless.

“There’s nothing else like it in the world, and there really isn’t anything that could even come close to comparing to our scale,” he says. “But also in contrast to that is the fact that this is still so totally grassroots, that none of us are doing this as a part of a production company or with any kind of financial backing. This is not a production house. This is just a group of friends and family trying to create something that the world has never seen before.”