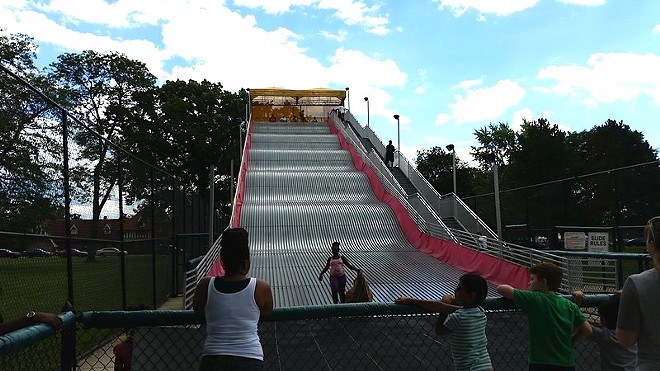 Drew Tarvin/Shutterstock
We love the giant slide, but it is a screaming metal death trap.

We were excited about Detroit’s giant slide on Belle Isle finally reopening Friday after being closed for several years — despite our painful childhood memories of getting our asses burned and feeling like we were going to die on it.

But in a Facebook video showing kids literally flying down the slide, it looks like even more of a metal death trap than we remember.


“I think they sprayed the giant slide with Pam or something,” Andre Terell, who posted the video said. “I don’t remember it being that fast.”

Neither do we, or the numerous other Detroiters sounding off in the comments.

“... it never been this fast these kids flipping over like cars I thought u just suppose to Slide down smooth,” Facebook user Pinkk Hernandezz said.

“So they want me to climb the stairway to heaven just so they can throw my ass back down??? I think tf not,” Sierra Lashay wrote.

Belle Isle, we love you but this slide is outta control. We wanted to ride it for nostalgia’s sake, but we're too old to risk the back pain. As Erica Onedayatatime said in the comments, “these orthopedic doctors about to get paid.”

If you’re keen, Terell, who will be DJing next to the slide, is offering to pay for rides. Otherwise, rides cost $1 each.

The slide will be open from 11 a.m. to 7 p.m. Fridays through Sundays until Labor Day weekend.