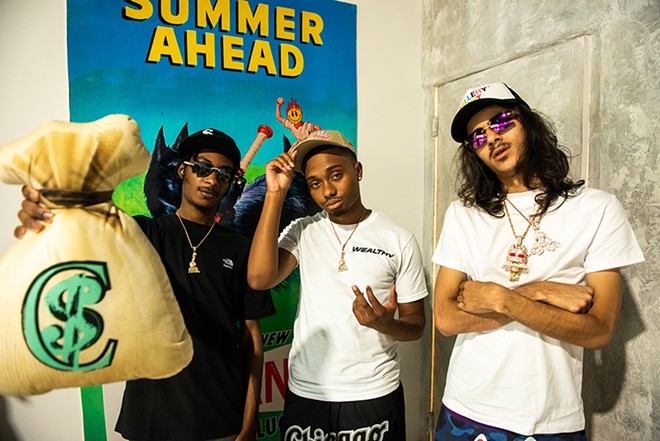 The trio of rappers StanWill, TrDee, and BabyTron are known as ShittyBoyz, and if you're confused by the name, just think of how people use the phrase, "This is the shit," and you'll understand that the moniker is all about being fresh and high quality.

The group is signed to Lando Bando's Hip-Hop Lab Records and has been on a 1990 Runnin' Rebels-type tear of late. ShittyBoyz's fifth project, Trifecta, reached 40 on Apple Music's Hip-Hop category in February, while BabyTron's eighth project, Megatron, made it to the 11th spot that following March, and was also selected to be a part of the XXL Freshman Class of 2022 in June. That's a lot of traction for a group of kids only three years removed from homerooms and graduation caps.

ShittyBoyz formed as teens, but have been friends for much longer. "I moved out to Ypsi, that's where I met them," says TrDee. "Tron and Will met in grade school."

StanWill had set up a little studio in his closet, and started making beats using the software Fruity Loops.

"I started making beats before I was rapping," he says. "Then I just started rapping over the beats I was making."

The crew began dropping music at a steady pace, and started building their fanbase on social media. "I was dropping like one song a week for sure," BabyTron says. "But I would only make one song a week. So whatever song I would make that week, I would just drop it."

The first thing to understand is that even with BabyTron's breakout success, that ShittyBoyz move and act as a unit. There is no BabyTron "and" the ShittyBoyz — it's just ShittyBoyz. StanWill and TrDee are both top-tier emcees, not the roleplayers you commonly see in other hip-hop groups. Much like the 2004 Pistons, ShittyBoyz are selfless all-stars who naturally jell together. BabyTron's individual accession has been organic, not planned.

"We all signed to Lando at the same time, so we all just been in the studio since then making music," says BabyTron.

All three emcees are known for their steady flows layered with facetious punchlines full of sports and pop culture references. They haven't deviated from that gameplan in their newest album, Trifecta 2, due Friday.

The lead single "Slam Dunk Contestants" features all three emcees rapping over a bass thumping beat. "OK, life lik a toilet, they be pissd 'cause I shit on 'em/ I beat done picked his ass off, you can't pick on 'em/ Mike Amiri tripping, he got way too many rips on 'em/ Used to brick a lot, now every shot I take a swish only," StanWill raps.

"I feel like we just go with the flow, for real," says StanWill. "And I feel like everything we make always be harder than the last shit we made."

The song "Lion - Hearted" is a mellow bass-heavy head-nodder that feels like it could be in the first scene of an urban drama movie. "All this ice hanging from my neck could start an avalanche/ Sliding in designer headwraps we the Taliban/ Way before I had some bands young dog I had a plan/ Fire bomb the whole block, shake it like Pakistian," BabyTron raps.

When putting together songs, the crew says they usually choose the beats they feel the best vibe from, and then go from there. "First we play the best beats we all got," BabyTron says. "It takes a minute. We don't want it to sound like something we already did. We probably make a song or two like that ...we record it all ourselves, not all the time, but 99% of the time."

Perhaps no song highlights the ShittyBoyz chemistry and fun like "WWE." The trio go back and forth, and bar for bar, with no hook for a full three minutes.

"Hit him with the ladder John Morrison/ bitch don't even mention the L.A. nigga, I make more than him/ Its like they got something to prove when I'm recording them/ in Miami tripping just like Stan bitch I'm with Dorian," raps TrDee.

Overall, Trifecta 2 is another step in the right direction for the group. Songs "Cheers B Tch" and "GGG" incorporate the group's retro '80s tech sound they're known for, while "Win Or Lose" and "Getaway" highlight their lyrical progressions.

As competitive as hip-hop can be, ShittyBoyz are more into complementing each other rather than competing against one another. Even in the studio, the group's energy is laid back or jovial.

"It's like everyone different, so I don't be trying to think like that for real," says BabyTron.

"I ain't gonna' lie, I do be scared for real," says StanWill through a laugh. "If I pick a hard-ass beat out my email, I be thinking I hope these niggas ain't rap on it."

TrDee points to StanWill and says, "If he go first on a song and he talk crazy, then I know I gotta talk crazy, too."

Ultimately, ShittyBoyz are just trying to make as much money and music as they can. They recently performed at the Rolling Loud Miami festival and are set to perform again for Rolling Loud New York in the fall, and they promise that even more music is on the way. For now, they're thankful for the fans and success so far, and have made it a point to not get too overwhelmed by it.

"We enjoying the moment," says TrDee. "It does seem like a blur, but we're enjoying that shit though."

"It has seemed fast, but it has been a slow grindy," BabyTron says. "It's been three years with Lando, probably two years prior to that just grinding, and the whole thing has been an experience and a journey. I wouldn't have had it any other way."