Shutterstock
I feel safe telling you to hit the panic button.

In the early Trump years, I worried about being hyperbolic — that sounding the alarm about his corruption and authoritarianism would look silly when he made it through his term without breaking the world.

By the end of the Trump presidency, I worried that I wasn’t being hyperbolic enough — that I and other political writers weren’t sounding enough alarms about the damage he’d done to the rule of law, about how dangerously illiberal his Republican Party had become, about how our democratic institutions weren’t strong enough to handle his full-frontal assault.

Having gone through the same mental roller coaster with the U.S. Supreme Court, I feel safe telling you to hit the panic button.

Yes, the decision overturning Roe was horrific, though not unexpected. The same goes for decisions curtailing the EPA’s authority to regulate carbon emissions and states’ ability to license handguns, not to mention rulings that shredded whatever’s left of the wall between church and state. (I found especially galling Clarence Thomas’ opinion authorizing Arizona to execute an innocent man because his lawyers sucked, and them’s the breaks.)

No court in recent history has upended American society more than this one did in June — and almost none of it for the better. Through their adherence to whatever version of originalism suits their ideological needs, six justices rendered this country less equal, less free, and more dangerous.

It is not hyperbole to say this court constitutes a democratic crisis.

Nor is it hyperbole to say the court has a legitimacy crisis: Five of the six conservatives were nominated by presidents who lost the popular vote — three of whom were confirmed by senators who represented well under half the country’s population — and the sixth is married to a right-wing activist involved in the insurrection.

It’s not hyperbole to say that by this time next year, five justices might have laid waste to even a nominal notion of democracy, all but guaranteeing decades of Republican rule.

On June 30, the court announced that it would hear a case called Moore v. Harper in its fall term, which means — frighteningly — that at least four justices didn’t dismiss the crackpot “independent state legislature theory” out of hand.

Quick backstory: North Carolina’s General Assembly has been battling with state and federal courts over its legislative and congressional districts ever since Republicans took power in 2011. In 2019, one of these cases — Rucho v. Common Cause — made its way to the Supreme Court, which ruled 5-4 that the federal constitution does not ban excessive partisan gerrymandering because it’s beyond the court’s scope to decide what’s excessive.

Writing for the majority, Chief Justice John Roberts suggested that reformers look to states: “The States, for example, are actively addressing the issue on a number of fronts. In 2015, the Supreme Court of Florida struck down that State’s congressional districting plan as a violation of the Fair Districts Amendment to the Florida Constitution. … Indeed, numerous other States are restricting partisan considerations in districting through legislation. One way they are doing so is by placing power to draw electoral districts in the hands of independent commissions.”

Ahead of the 2020 election, a North Carolina state court struck down the partisan gerrymander the Supreme Court didn’t touch. After the General Assembly redrew districts for the 2022 election, the state Supreme Court — which Democrats control 4-3 — blocked them again and ultimately drew its own congressional lines.

So no injunction, but the case lived on — oral arguments this fall, a ruling next spring.

The case centers on the Constitution’s Elections Clause: “The Times, Places and Manner of holding Elections for Senators and Representatives, shall be prescribed in each State by the Legislature thereof.” (Another clause says basically the same thing about presidential elections.)

In essence, the General Assembly argues that state courts and constitutions cannot protect voting rights in federal elections — a view that wildly misunderstands the Founders and has been repeatedly rejected by the Supreme Court over the last century.

That, however, was before the Federalist Society took over. Now, this longstanding precedent likely rests on the shoulders of Amy Comey Barrett. So the question probably isn’t how the court will rule, but how extreme its 5-4 ruling will be.

In the worst-case scenario, not only would state courts be barred from blocking partisan gerrymanders, voter ID laws, absentee ballots, or even laws that toss ballots for the hell of it, but governors might lose their veto over election-related laws, and any laws or constitutional provisions requiring independent redistricting would go out the window.

At the risk of confusing you: The above would apply only to federal elections, not state elections. So while a governor could veto and a state court could strike down a voter ID law as it pertains to state elections, it could not do so for the federal part of the ballot — which is a logistical nightmare in the making.

Of course, voting rights could still be enforced by federal courts — though the Roberts Court has been systematically destroying the Voting Rights Act for a decade, so good luck. But most state constitutions, including North Carolina’s, consider federal rights the floor, not the ceiling. Republicans are asking the court to make the ceiling the floor, all so they can circumvent the state’s constitutional requirements and grab unwarranted power for themselves.

The kicker: A North Carolina law spells out the process for challenging legislative districts in state courts. In other words, the General Assembly already prescribed the manner for dealing with these controversies.

There’s no reason for the Supreme Court to get involved. Unless, that is, it’s looking for an excuse to make our democracy less democratic. 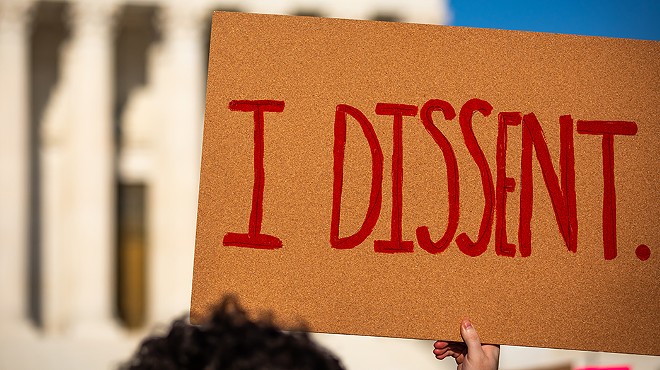 In the span of 10 days, the Supreme Court took us back 10 decades: Courting hypocrisy