Memorializing the victims of gun violence 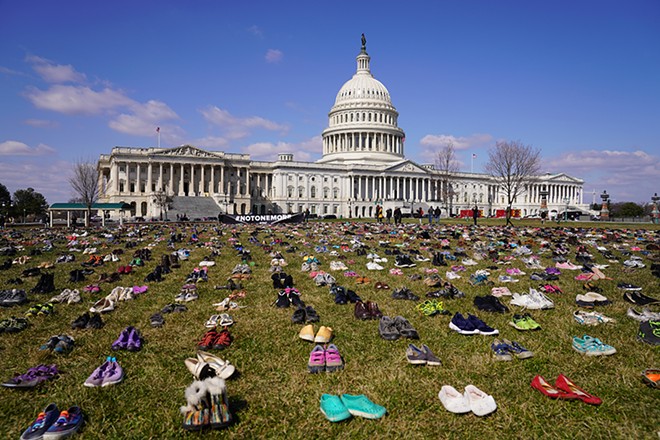 Shutterstock
Perhaps it’s time to memorialize those whose lives were taken in the United States, too.

Memorial Day serves as the unofficial starting block for summer. For those of us who live in parts of the United States where the thermometer spends more time south of freezing than it does above it, it’s a welcome opportunity to spend time outdoors. But Memorial Day is about more than hotdogs, swimming pools, and seasonal allergies.

It’s about memorializing those who’ve given the “last full measure of devotion,” as President Abraham Lincoln phrased it in the Gettysburg Address. He was dedicating the cemetery at Gettysburg where just months earlier, tens of thousands lost their lives in one of the Civil War’s bloodiest battles. Memorial Day as we know it began after his assassination — as arguably the last Union soldier to be killed in the line of duty.

There’s a reason Lincoln traveled to Gettysburg in 1863, a reason Memorial Day continues today — many decades and many wars later. Memorializing has power: it forces us to remember what we might rather forget.

This year’s Memorial Day was a poignant reminder of how easy forgetting has become.

Not a week earlier, 19 children and two teachers were killed in their school by an 18-year-old armed with two assault-style rifles he bought legally.

Not two weeks earlier, another 18-year-old, armed with an assault-style rifle he bought legally, traveled more than two hours to kill 10 people doing their weekend shopping at a grocery store in Buffalo. In between, there was a third mass shooting at a church in California.

None of the people who died in these mass shootings — or the additional 209 that took place before them this year alone — died in the line of duty. They didn’t give “the last full measure of devotion” for their country; instead, they had it violently ripped away from them in their country. Though they were killed by weapons of war, they didn’t die on battlefields. They were unarmed. Nineteen were kids. Their murders were the consequence of the misplacement of those weapons.

And perhaps it’s time to memorialize them too.

There’s a brutal paradox to mass shootings. The more often they happen, the more normal they become. The more normal they become, the easier they are to forget. Uvalde, Buffalo, Boulder, Arora, Charleston, Las Vegas, Orlando, Parkland, Sandy Hook, Columbine: alone, simply uttering the names of these cities should remind us of the atrocities committed there. But adjoined, they melt together into a list of cities and towns. Indeed, gun violence has become so common in America, that it transcends any particular geography. To appreciate how profoundly true that is, consider that I didn’t list St. Louis, Baltimore, New Orleans, Detroit, or Cleveland in that list — though they’ve had more gun violence in 2022 than anywhere else. But we don’t even register that as abnormal; it’s baked into our shared understanding of what happens in cities. Implicit in that is the fact that we routinely devalue the lives of the disproportionally Black Americans killed there.

As I wrote last week, more than any other, addressing America’s gun violence epidemic is about one thing: the guns. There is a vested, committed, united opposition to addressing this crisis counting on us to forget. Just wait a few weeks, and everyone will move on, they understand. Which is why we can’t keep moving on, why memorializing those who’ve died by gun is so important.

I’d like to leave you with that last full line from Lincoln’s Gettysburg Address:

“It is rather for us to be here dedicated to the great task remaining before us — that from these honored dead we take increased devotion to that cause for which they gave the last full measure of devotion — that we here highly resolve that these dead shall not have died in vain — that this nation, under God, shall have a new birth of freedom — and that government of the people, by the people, for the people, shall not perish from the earth.”

“The great task remaining before us” … ought to be to “highly resolve that these dead shall not have died in vain.” That work requires that we remember, that we memorialize.

Originally published May 31 in The Incision. Get more at abdulelsayed.substack.com.