The letter is in response to news that a Michigan private school gave students an assignment asking them to identify primates, with the former U.S. President included 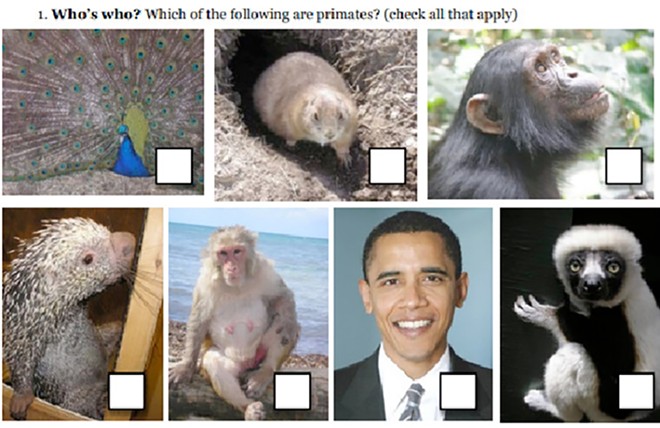 Metro Times received the following letter to the editor from Ingrid Newkirk, president of the People of the Ethical Treatment of Animals. The letter was in response to news that a Michigan private school had given students an assignment asking them to identify primates, with former President Barack Obama included among the photos. (In response, the Roeper School in the Detroit suburb of Birmingham apologized for the "disturbing racial offense" and placed the teacher responsible on administrative leave.)

A biology teacher at a private school in Michigan has come under fire for distributing a worksheet that included a picture of former President Barack Obama in an assignment about primates. It may surprise some that the author of this letter is a primate, and so is everyone reading it. We forget that we humans are not gods, that we are primates — animals — and that our fellow animals are not machines or objects, even though they are treated as such.

There is a lesson here, and it is that the human species is the most pompous on the planet — the one that has despoiled its own living space and fights wars against its neighbors rather than learning to live together.

Dr. Martin Luther King Jr. said, “Injustice anywhere is a threat to justice everywhere.” One has only to look into the slaughterhouses, factory farms, laboratories, and hunting lodges to see injustices carried out under the rationale that although all other living beings have a heart and a mind, can feel fear and loneliness, and share the desire to stay alive, they exist not for themselves but for the taking. That is the very definition of speciesism, and unless we challenge it at every turn, we will never abolish racism, sexism, anti-Semitism, and all the other ugly “-isms.” They are all cut from the same cloth.

Newkirk's message is worth sharing, but wanted to note that it does not acknowledge that comparing Black people to apes is a longstanding racist trope that was used to justify slavery and Jim Crow.

After we published this story, PETA followed up with an additional statement.

"As a social justice organization, PETA has always decried all injustice, including racism and using speciesism to perpetuate racism, so certainly we condemn the hateful trope of denigrating Black people by comparing them to other primates," a representative from the organization said.

This story was updated with additional comments from PETA.