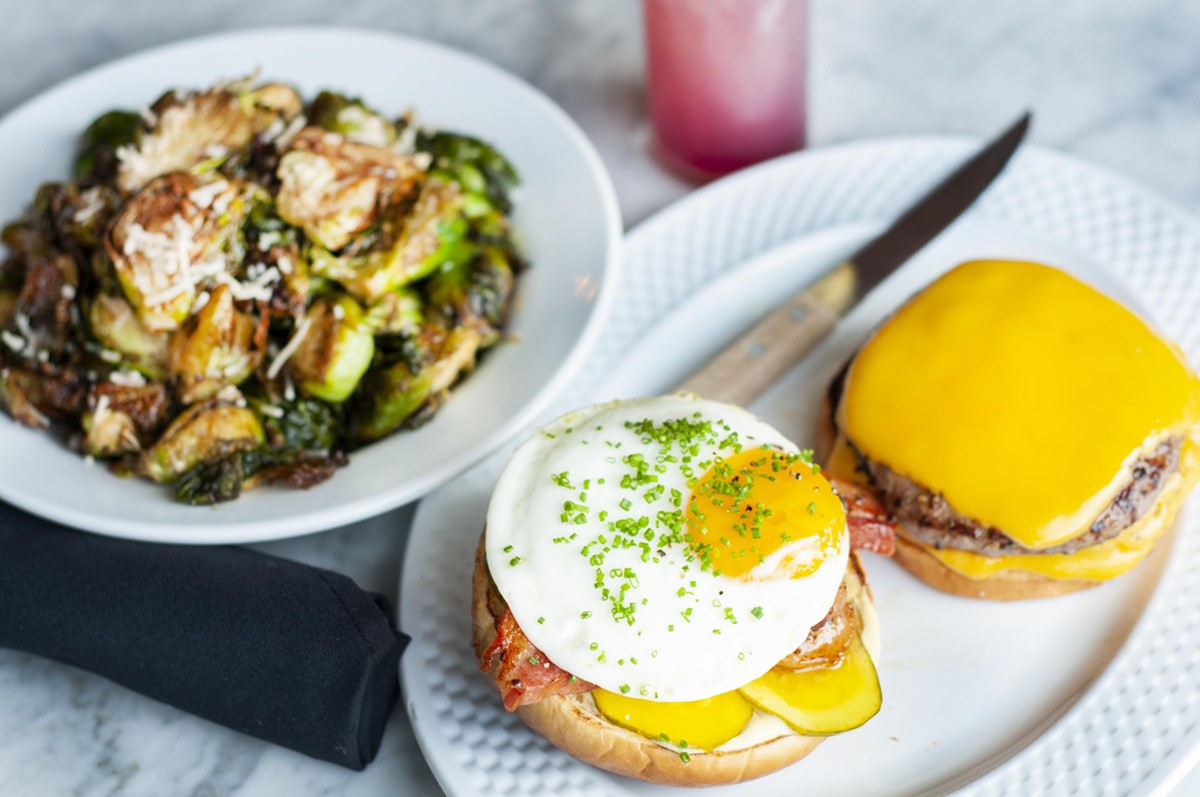 When the original Public House opened in 2013, the Metro Times’ Noelle Lothamer nailed its formula for success: “Choose an area of town with a high concentration of people in their 20s and 30s who like to go out often but don’t want to spend fine-dining dollars. Reel in the crowds with low-priced, trendy menu items and good ambiance, and then cash in as patrons spend most of their money on their bar tabs.”

I’m not sure why Noelle sounded somewhat disapproving of these formulaic “bar-restaurant hybrids,” but she noted that the recipe had worked for nearby taco spot Imperial and Detroit sliders joint Green Dot Stables, with food at the former priced at less than $5.

Today’s Public House, closed in summer 2020 and reopened under a new owner in December 2021, follows the formula without the handicap, for management, of low prices. Burgers are $15, appetizers $11-$13, cocktails $14-$15, desserts $9 or $10. The required trendy foods would be the extensive list of new vegan items, and the good ambiance is found in the enclosed back patio, which is as fern-y as any ’80s fern bar.

Lest that sound disapproving — the patio-garden really is lovely, with palm trees and wisteria and a wall of pretend flowers in shades of pink; you take your selfie under “Hello Gorgeous” written in neon. 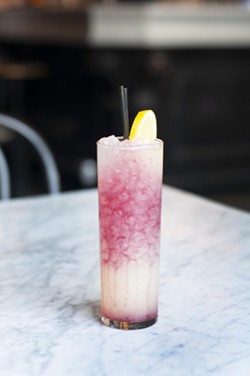 The food is good, more hits than misses by far, and I enjoyed both a cocktail and a mocktail, each with ginger, and there’s ginger beer too. The beer list, transferred from the best-sellers of the previous Public House incarnation, is relatively short, with eight drafts, five bottles, and eight cans, including $6 PBR, $5 Bud Light, and some fancier drafts from Michigan and elsewhere.

Oddly, my friend’s beer was served in a small snifter, and my refreshing, lemony “Tall Tale” (vodka, yellow Chartreuse, ginger, lemon, with a cherry) appeared in a glass much wider than it was tall. That’s OK, there are no rules worth following in the stemware department.

Stand-outs from both sides of the menu, vegan and not, are Brussels sprouts and carrots. The big pile of sprouts tastes fresh despite what’s been done to them, including vegan “Parmigiana” and a sriracha agave vinaigrette, and the carrots, though hardly recognizable in color, are a crunchy, smoky delight, to dip in a buttermilk-dill mixture.

I was equally enthralled with red shrimp from Argentina, big and juicy. They’re served with a corn purée. 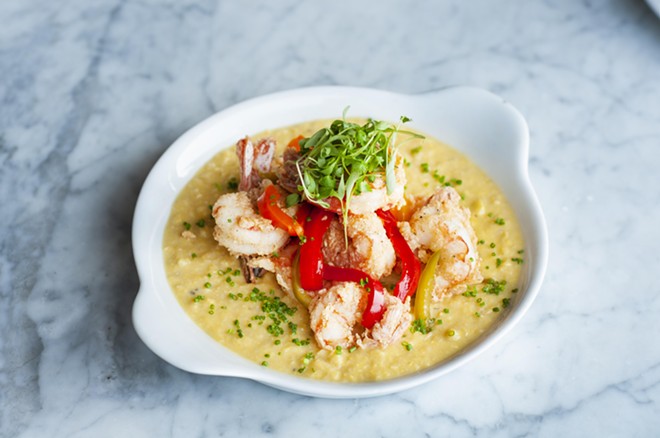 Tom Perkins
Red shrimp from Argentina, big and juicy. are served with a corn purée.

The tall burger includes two 4-oz. patties, Dijonnaise, red onions, and American cheese, and I chose to gussy it up with a fried egg and some bacon, neither of which was wasted; the thick, flat bacon is cured and smoked in-house. I asked chef Vince Strolis why American cheese, and he spoke in terms of simplicity and not “wanting to get pulled in a bunch of different directions.” The flavor is prominent and good for nostalgia value but something more interesting would have been welcome.

Among the sliders, the slightly sweet chicken-apple is the best, perhaps because of the bacon jam and avocado. Chef Strolis chooses Gouda here for his beef slider, but neither it nor the salmon slider are particularly memorable.

The Reuben is. It’s a big slab of mellow beef, so rich as to bring to mind vanilla or caramel. The Nashville Hot Chicken worked less well; my companion asked for hot sauce.

Regarding the Caesar salad: it is not a Caesar if the dressing tastes like mustard and the lettuce is shredded into little tiny bits. Frankly, I think I would have sent it back, protesting false advertising.

Other vegetable offerings are a wedge salad, beet salad with burrata, cauliflower tacos, smoked mushroom sandwich, and vegan “shrimp,” plus the housemade vegan burgers. The burgers, which include barley, carrots, and beets, deliberately don’t try to mimic a beef burger. Strolis explains that many vegans are put off by a meaty texture; besides, “when you look into the science aspect, when you look into things that help bind the ingredients together, what can work well with xanthum gum and soy protein — you don't want to get lost in all those powders.”

I was fortunate to try all three of Public House’s chocolate desserts. Best by far was a giant slice of vegan chocolate cake, which had a bit of a crunch and something smoky in the frosting. Next was Double Chocolate Dream, a hard chocolate shell around cake and raspberry mousse. A poor third was vegan Red Velvet Cake, its icing a sickly pink — because it’s flavored with Red Pop!

There are better sounding ideas on the menu: a BLT with aioli, a pretzel croissant (closer to a croissant than a pretzel), smoked mushroom dip on a baguette, and a number of seitan and tempeh pretensions. Make a reservation; like Noelle said, it’s popular.