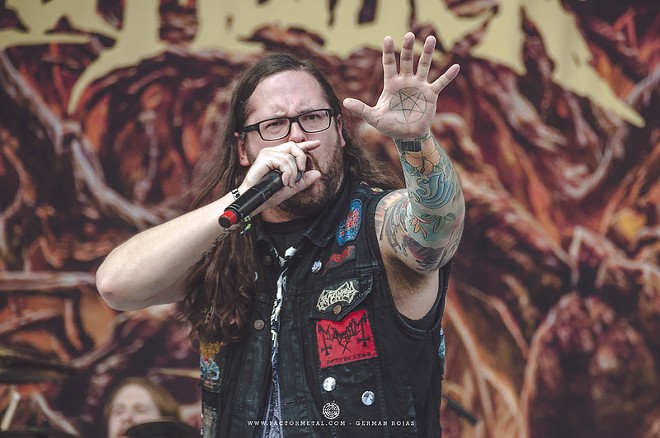 Strnad, who was 41, could frequently be seen drinking beer and sharing laughs at Michigan metal shows. It was hard to miss Strnad, a burly dude with glasses who loved to party and talk about death metal.

“Beloved son, brother, and Shepard of good times, he was loved by all that met him,” the band wrote on social media. “A walking encyclopedia of all things music. He was a hugger, a writer, and truly one of the world’s greatest entertainers. His lyrics provided the world with stories and spells and horror and whimsy. It was his life to be your show.”

No cause of death has been given so far, though the band’s post includes the number for the Suicide Prevention Hotline at the end.

Decibel Magazine, whose pages Strnad frequently appeared in, wrote that it seems impossible to fathom that Strnad would take his own life to anyone who has interviewed him, seen him perform, or knew him in real life.

“His life force was so strong that you can’t see him not existing,” the metal magazine wrote. “... he was a consummate performer who turned BDM shows into moving parties, death metal’s version of the late Hank von Hell of Turbonegro. Finally, he was a death metal fan, historian, and archivist of the highest order. Even if you count the Decibel staff, few people on the planet loved death metal as much as Trevor Strnad.”

The Black Dahlia Murder’s name comes from the infamous unsolved murder of Elizabeth Short in 1947 in Los Angeles, who was dubbed the "Black Dahlia." The band formed in Waterford in the early 2000s.

The band's most recent album Verminous was released in 2020, and they had tour plans for this summer including an appearance at Dynamo Metalfest in August. This makes the news of his abrupt death all the more surprising. He was one of the few original members left in the band’s current lineup.

A post shared by The Black Dahlia Murder (@theblackdahliamurder_official)