With Freep Film Festival and more, documentaries of all stripes land in metro Detroit

It's a big week for documentary here in metro Detroit. The Freep Film Festival's screenings and events stretch from Wednesday, April 27 to Sunday, May 1, across venues including Frame in Hazel Park, the Detroit Film Theatre, the Redford Theatre, and the Michigan Science Center, among others. They're chased, too, by a separate, unrelated screening of landmark labor documentary The Wobblies playing Cinema Detroit (another participating festival venue) on May 1, and a revival there the weekend after of Flint, a 2021 Freep selection focused on the city's ongoing water crisis. With festival offerings encompassing activist profiles, policy investigations, fringe subcultures, and glimpses into the lives of both working artists and restauranteurs, there should be something playing to call to virtually anyone. While not everything playing Freep was available for advance review, what follows is a rough guide to the festival's many offerings.

Opening the festival is Gradually, Then Suddenly: The Bankruptcy of Detroit, which dives into the story of not only the city's 2013 bankruptcy but the ensuing fallout, ranging from the appointment of an emergency manager to the delicate negotiations over the city's policies and assets. An eye for local history, too, is present in America You Kill Me, a long-delayed premiere focused on Jeffrey Montgomery, a civil rights advocate whose trajectory as an activist was galvanized when his boyfriend was murdered outside a bar in meto Detroit in what was dismissed then by investigators as "just another gay killing." Following the late firebrand's career in state-level and national activism, the film looks to explore the crucial work of his career alongside its personal costs.

Warmer-looking but hardly friction-free is Beth Elise Hawk's Breaking Bread, an Israel-set feature on the A-Sham Arabic Food Festival in Haifa, focused on the struggles of cross-cultural collaboration between Arab and Jewish chefs there to bridge divides while making some gorgeous meals. Tenser by comparison is Bad Axe, a personal documentary focused on director David Siev's own Asian-American family in the Michigan town of the same name. Homing in on the family's experience as minority restaurant owners in the Thumb, the film documents their struggles to keep their business standing amid the reactionary environment of COVID-19's early days in America. 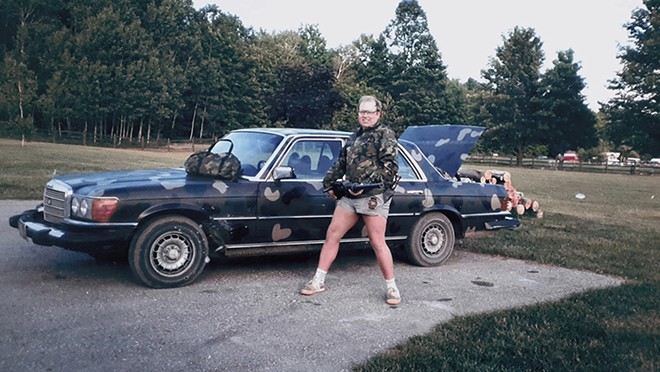 Courtesy photo
2nd Chance focuses on the life of eccentric entrepreneur Richard Davis, who fell out of Detroit's pizza scene before going on to invent the bulletproof vest in 1969.

Touching on subjects both culinary and martial is Ramin Bahrani's Sundance documentary 2nd Chance, which focuses on the life of eccentric entrepreneur Richard Davis, who fell out of Detroit's pizza scene before going on to invent the bulletproof vest in 1969. To its credit, 2nd looks to be a probing rather than a celebratory look, taking its subject's trajectory in the body armor business for an opportunity to consider tiers of power, celebrity, and mythologies of self-starting in a broader social context. Offering similar space for considering such themes is Riotsville, USA, Sara Pettengill's examination of a fictional town built for anti-uprising training exercises by the U.S. military. Probing past the pyrotechnic theatricality of their maneuvers, the film looks to dive into the narratives used to justify even the most forceful measures of top-down militaristic control.

One standout working off similar themes (which was available for review) is Jenny Perlin's Bunker, which moves between multiple underground former military and nuclear encampments retrofitted in various styles by a variety of doomsday-prepping men. "Survival is not everyone's agenda," says one, suggesting his work in a half-furnished dome to be a kind of calling, before lolling about on a couch. Taken like the other men with dreams of self-sufficiency, those depicted vary in their tone, competency, and even a little in their tastes, though the latter range only so far. This last bit is striking as part of the film's visual fabric, which consists of many roving tours. While the millionaires it makes its subject — "hard–working self-made people," insists one dealer — have the means to turn their spaces into anything they could wish, their bunkers are always outfitted as sparse caverns or endless, stale McMansions: outfitted with signifiers of luxury (ping-pong tables) or survival (endless masks and weaponry), but no vectors of real color or of life. The fantasies they realize are never pastoral or edenic, despite all that's available to them, and the men — who even when married seem to wish that they were single — always appear alone.

Framed by contrast around a small but lively array of women dogsledders, Anu Rana's Musher frames dogsled racing in the Keewenaw Peninsula as a lifestyle choice, a year-round preoccupation, and a collaborative venture more than a competitive one. Focused on racers as young as 11 alongside one with grandchildren by the movie's end, Musher's action is calmer than you'd think, highlighting the the day-to-day rhythms of preparation in which racers engage long before they hit the snow-covered trails for one of Upper Michigan's annual CopperDog races. (These top out at 150 miles — so far shorter than the Iditarod — but still present a formidable challenge.) "We live for winter," one woman says before a tour of a dog team's hay-and-barrel living quarters. The film has many of these, each a stripped-down showcase of pastoral DIY craftsmanship presented with clear authority but little pretense. These rhythms — of training and entertaining dogs, of delivering new litters and maintaining homes — and, finally, of a community rising to support each racer, all in concert with the seasons – manage to be sweet and calming while retaining a little mystery. When one racer suggests that the race itself provides a kind of exercise in mindfulness, it's easy to believe her.

Likewise anchored by small-town life, Iron Family centers on Jazmine Faries, an early-30s woman with Down syndrome who puts on a yearly theater showcase of her own collaborative work. With productions rooted in her own independent-minded, whimsical creativity and elaborate workshopping sessions with her brother and her mom, Faries' show traffics routinely in the idea of a fantasized "double life." Through this, the show manages to speak both to the limits of her surroundings — a heavy television and pop-cultural diet, a tiny dating pool, a sometime lack of understanding by those around her, and even difficulties in maintaining a healthy diet — as well as to all that she receives in both familial and community-based support. Casting dreams and art-making as invigorating (if rarely circumstance-altering), it's hard in watching to know if Faries might have a better life beyond Iron River itself if she found a path to one. There's little question, though, that she's making the most of what she has, which might ultimately be the only thing that counts.

A more politically engaged portrait can be found in David J. Ruck's The Erie Situation, orbiting around recent environmental and water-rights activism of residents along Lake Erie. When industrial agricultural dumping precipitates toxic algal blooms near Toledo in 2017, recreation opportunities, wildlife, and water quality all take a hit. Research, aid efforts, and court battles all swiftly follow in a conflict begging questions that resonate with issues of governance, sustainability, and climate change more broadly. What results is a sprawling case study of the negotiations between activists, policymakers, and industry in making a world that can work for each of them. As might seem natural considering its fraught subject, the film offers some sense of promise but few easy comforts.