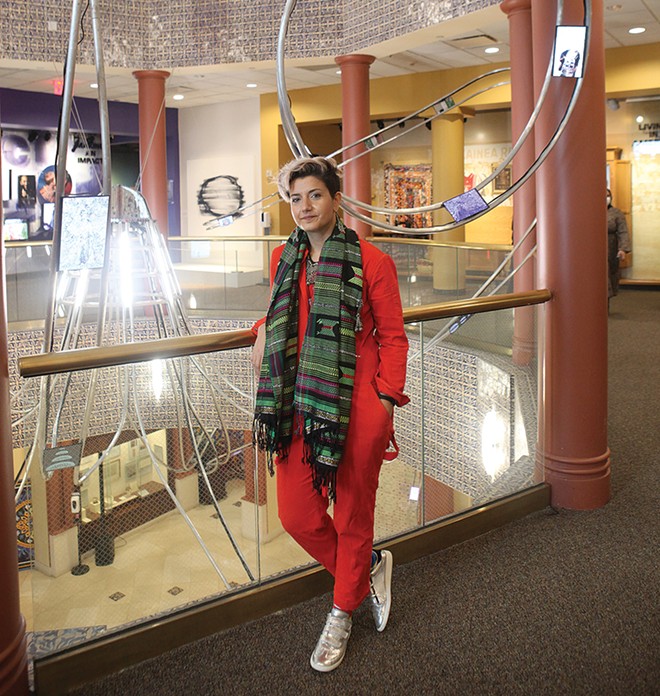 Courtesy of the Arab American National Museum
Resembling a cross between a spaceship and an octopus, “al-Falaq” has 35-foot tentacles that extend throughout the floors of the museum, outfitted with 81 computer screens. Ali describes it as a “museum within a museum.”

The new art installation at Dearborn's Arab American National Museum, "al-Falaq," defies any easy explanation. Looking like a cross between a spaceship and an octopus, the sculpture's 35-foot tentacles twist across multiple floors of the museum, with computer screens in the place of suction cups. Its glowing "head" is suspended 20 feet above the ground in the museum's atrium.

It really has to be seen to be believed — and to be fully understood.

Its creator, Alia Ali, recently gave a tour of the installation — which she describes as a "museum within a museum" — when it made its debut last month.

Ali was born in 1985 in Yemen to a Yemeni father and a Bosnian mother, both linguists who spoke seven languages between them, she says. In the 1990s, both of her ancestral homelands became ravaged by conflict, and in 1998, her family moved to Hamtramck in metro Detroit, since her grandfather got a job at Chrysler.

"During this time, I remember thinking of this word 'alien,' being an alien, and what does it mean to be have extraterrestrial powers ... of being of two cultures and speaking two languages," Ali says while looking up at her sculpture, adding, "only to later on find out that being an alien in this country legally only meant that I was subhuman."

Ali wound up getting a scholarship to study art and political science at Wellesley College in Massachusetts. In 2014, a new civil war broke out in Yemen, and while Ali was studying for her masters in fine arts at the California Institute of Arts, dozens of Yemeni children were killed in a Saudi-led airstrike on Aug. 9, 2018.

Ali says she found herself shaken by the incident, and became transfixed by the conflict.

"After seeing all of this, I started looking at Google," she says. "I became quite obsessed with looking at Google. When you type in 'Yemen,' all I would see [was images] of suffering." But Ali says she was also unable to find out much about Yemen from looking at books, either, since its history was written by colonizers.

Those experiences resulted in the launch of what Ali describes as her Yemeni Futurism body of work, which she says is inspired by Afrofuturism, a sci-fi-inspired art movement once described by Detroit-born arts curator Ingrid LaFleur as "a way of imagining possible futures through a Black cultural lens."

"What inspired this was rage, pure rage," Ali says, "to turn something that's toxic to me, toxic to my community, toxic to how we see each other, into something beautiful."

She says with her art, she wants to create a new narrative for Yemeni people.

"If all Yemenis kind of exist in this sort of dystopian present constantly, only to hold onto this beautiful nostalgia of only looking to the past, then therefore the only thing as you're going ... to look forward to is a dystopian future."

She adds, "Don't exist within the narrative that is set for you, because you only exist in a place of position of defending something, you will only be responding to someone else. Start an entirely new narrative completely."

She describes "al-Falaq" as "a monument for Yemenis, first and foremost." She also describes it as a bit of a critique of the Arab American National Museum; despite the fact that people of Yememi ancestry are one of the largest groups in metro Detroit's Arab-American population, the museum had few objects representing Yemen, she says. Ali says the sculpture's shape is inspired by spiders, considered sacred in Islam because they are said to have spun a web over the entrance of a cave where Muhammad was hiding, protecting him from enemies, as well as the elusive glass octopus, a rarely seen creature spotted in the depths of the Arabian Sea.

The outer space theme was also inspired by a 1997 news report that three men from Yemen had sued NASA, arguing that its Pathfinder spacecraft and Sojourner rover were trespassing on the planet that rightfully belonged to them. The ancient Sabaeans, who lived thousands of years ago in modern-day Yemen, worshiped the planets.

"We inherited the planet from our ancestors 3,000 years ago," they told the Arabic-language newspaper Al-Thawri.

The lawsuit was laughed off in the West. "It's a ridiculous claim," CNN reported NASA news chief Brian Welch saying after laughing. "Mars is a planet out in the solar system that is the property of all humanity, not two or three guys in Yemen." CNN ended its brief report with a joke: "There was no word on whether they had paid the appropriate inheritance taxes."

"People mocked and laughed, like, who are these primitive people?" Ali says. "In fact, they're heroes, because what does it mean to not only occupy our land, but now there's also an occupation of our myths and dreams?"

“Don’t exist within the narrative that is set for you ... Start an entirely new narrative completely.”

The sculpture's 81 tablet screens, located across its tentacles, incorporate a number of references from Yemeni pop culture (the late singer Ofra Haza, a Yemenite-Jewish star known as "The Israeli Madonna," is featured) as well as Arabian folklore (including creatures like jinns, or genies, represented by a glitch effect on the screens).

Perhaps controversially, the screens also include images of Yemeni artifacts gleaned from the collection of the Metropolitan Museum of Art in New York.

"These are objects that still are considered looted," Ali says, saying that they were stolen from Yemen by British colonizers in the 20th century. "So this project also becomes about questioning the military-industrial complex, but also the museum-industrial complex, as it is sort of hand-in-hand with war."

The project was commissioned by the AANM, with support of the Mellon Foundation.

The project involved a large team of artists and fabricators to bring it to life, including an architectural consultant, an electrician, an animator, and an installation team. Installation took four days to complete, Ali says.

It will be on view for two years in the AANM, which reopened in January after being closed to the public for nearly two years due to the pandemic.

Ali says she hopes that the art installation will inspire other Yemeni people the way she has been inspired by her research into Yemeni culture.

"To me, this is a letter from our ancestors to the future," she says. "Because if I can feel 3,000 years ago, then surely we can imagine ourselves 3,000 years from now." 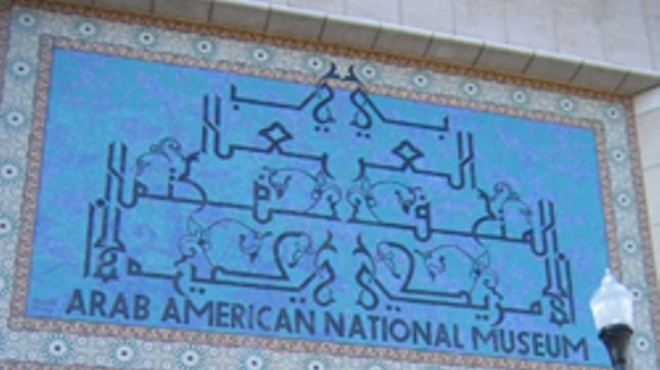