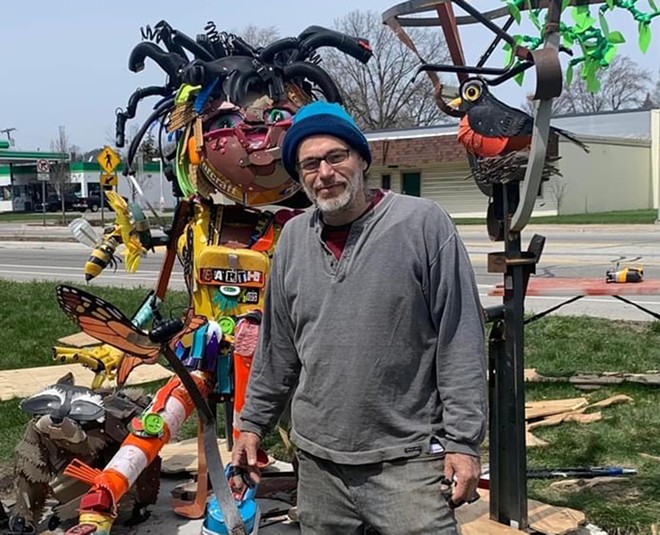 Courtesy photo
Growing up, Teachout would see trash at the curbs and he would create an image in his head or a shape. He says trash would “trigger his imagination.”

One man’s junk is another man’s treasure. Well, at least that’s the case for Dale Teachout, an Oak Park artist.

The 65-year-old sees art in any and everything. He has been repurposing recyclable materials into art for more than 20 years, making assemblages of found recycled materials.

Teachout describes finding treasure in another’s person trash as a “strange process.” But he gives that bounty a new and extended life.

“I just really like collecting things that I can eventually turn into a piece of artwork,” Teachout says.

Last year, Teachout was working on some art pieces at a neighbor’s house. His neighbor recommended that Teachout start expanding his work to a bigger audience, and apply for the artist position for the city of Oak Park’s new project.

While scrolling on Facebook, Teachout came across a post from the city requesting proposals from people who could design sculptures for the new linear park. The sculptures would be placed at the park as part of Nine Mile Redesign, a grant-funded public-improvement project that will bring multiple amenities to Nine Mile Road.

The Redesign covers the area on Nine Mile Road from McClain Drive to the eastern border of Oak Park, and will extend into Ferndale. The project is expected to transform and revitalize the Nine Mile Road corridor and spark a new beginning for Oak Park.

Teachout sent in his proposal and he was approved to create an outdoor installation on Nine Mile Road.

“I was so shocked when my proposal was selected,” Teachout says with a laugh. “I can’t believe my work will be on display for everyone to see.”

“Since I have been creating, I realize that people throw away way too much.”

“When selecting the materials for this project, I already knew I wanted to make large, super-cute kids,” he says. “Working on something large like this is like a big puzzle, and it takes a long time. Sometimes you have to take it apart the next day because you are after a certain look.”

Teachout’s 12-foot-tall artwork on Nine Mile Road is all about saving the Earth.

“You’ve heard of Bat Girl, but now we have one of the famed superhero group Earth Kids, whose job it is to save the planet,” Oak Park Mayor Marian McClellan says. “The second art installation underway on Nine Mile Road features Earth Girl and her helpful friendly critters Robo Squirrel, Recycle Raccoon, a cheerful robin, and some bees.” 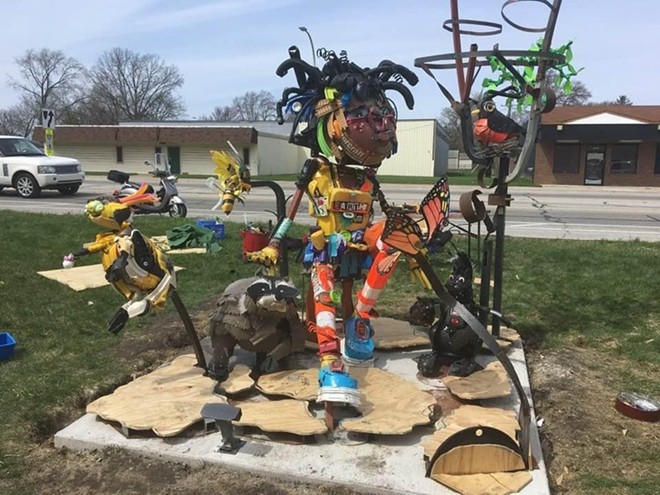 While developing the project, Teachout knew that he wanted the “Earth Girl” in his piece to have braided hair, so he used vacuum cleaner hoses for her hairstyle.

Residents walking the path on Nine Mile observe the new art piece come to life, and Teachout tells passersby stories about each piece he is creating. 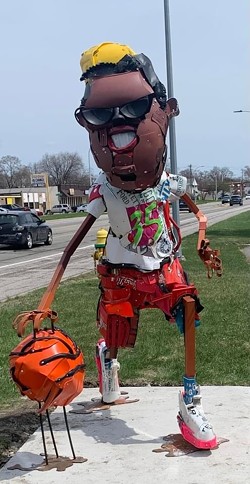 Courtesy photo
“I love Hoops Guy’s energy and positive, cheerful vibe as he dribbles a basketball down the trail,” Oak Park Mayor Marian McClellan says. “It’s the perfect piece for a play area.”

He says that he brings life to his characters.

“People know that there is history from each item in these sculptures,” he says. “It makes people feel a certain way when they see my work. When they see something familiar that they’ve used in their life people tend to have a better connection to the art. It makes a web of meaning. A little boy’s metal toy truck brings you back to that vintage lifestyle.”

McClellan says that her favorite art piece that Teachout created is the basketball player.

“I love Hoops Guy’s energy and positive, cheerful vibe as he dribbles a basketball down the trail,” she says. “It’s the perfect piece for a play area.”

In 2011 the city had no municipal art to express its identity as a city, she says.

“Soon there will be three installations at the Nine Mile Linear Park alone,” she adds. “More art is planned for other areas of the city to get residents talking to one another and thinking about what it means.”

Teachout has always enjoyed recycling since he was a child. He would make sure that he would reuse what he could to help the planet.

“I recycled since I was a young child,” he says. “We never would waste growing up when I was at home. My mom would wash out plastic solo cups and reuse it. I guess I got it from my mom!”

Growing up, Teachout would see trash at the curbs and he would create an image in his head or a shape. He says trash would “trigger his imagination.”

“I didn’t want to pick up everything, so I told myself that I had to create a use first before I pick up something,” he says. “Since I have been creating, I realize that people throw away way too much.”

Carey Gustafson, a resident of Oak Park since 2018, says she is excited about the art pieces being added throughout the city.

“I see the art, particularly Dale’s creations, almost daily, because we’re down the street neighbors and keeping an eye on each other’s art installations and studio spaces,” Gustafson says. “It’s wonderful to see his work getting attention and showing other towns how important preserving and celebrating the arts in communities is.”

Teachout’s art just puts you in a great mood, she says.

“We consume art in all kinds of ways, but walking along and coming across something colorful, intentional, and has some humor is a jolt to your soul,” she says. “Or it could be, if you’re open to it!”

Teachout hopes his artwork inspires change in the world.

“I want people to see possibility and creativity when they drive past my work,” he says. “We can all make the world a better place by doing the smallest things starting in our own neighborhoods.”