The Marshall Tucker Band has a new generation of fans 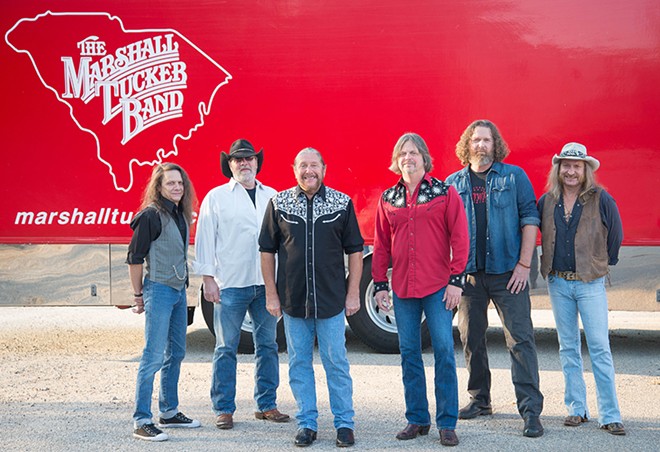 The Marshall Tucker Band had its hits in the '70s. But when singer Doug Gray looks out at the audiences at the band's shows, he doesn't see a room full of those who grew up on the songs. He sees a lot of people who weren't born when "Can't You See," "Fire on the Mountain," and "Heard It in a Love Song" were all over the radio."We didn't start out knowing these songs would be a hit, that these songs would be played 8 million times on the radio or somewhere," Gray says in a phone interview from his South Carolina home. "'Heard It in a Love Song' is catching up to 'Can't You See,' and 'Fire on the Mountain' is in there and they keep going up.

"It's because of the young people and all the stuff that's out there, in movies, on Netflix," he says. "They hear a song, look up Marshall Tucker Band, they hit click and they download that song. It's made life simple for them and it's not hurting our pocketbook at all."It's also because the MTB classics have become staples on the TV singing contest shows."I'm guilty of watching The Voice. I'm guilty of watching American Idol," Gray says. "I'm 73, but my girlfriend is 20 years younger. She'll see me after watching and say, 'you've got tears coming out of your eyes.' It's because I just heard a 16-year-old girl who's going to be a star. I can feel it right now, just like Elvis did. And she did one of our songs.

"When they do 'Can't You See' in front of 8, 9 million people, I always reach out to them. I wish them good luck and all of that," he says. "Not all of them win." Gray was one of six young guys who got together in Spartanburg, S.C. in 1972 and borrowed the name of a blind piano tuner for a band moniker. Unintentionally, the band came up with a distinctive brand of music that got played on rock and progressive country stations."We did it without knowing there was any difference between country, rock 'n' roll, rhythm and blues, or jazz," says Gray. "We put all of those together without knowing what the heck we were doing. We even got invited to jazz festivals.

"Toy and Tommy (Caldwell) were the country influences in the group, Doug, that would be myself, and George (McCorkle) were the R&B players," Gray says. "Jerry (Eubanks) was the flautist. He played sax in the high school band, too. You bring all that together and it's like the soup your mama made on Sundays when she cleaned out the refrigerator. You drop everything into the pot and out comes the Marshall Tucker Band."

Toy Caldwall was the band's primary songwriter and lead guitarist. His brother played bass, McCorkle played rhythm guitar, Paul Riddle was the drummer, and Eubanks played everything else — keyboards, saxophone, and flute. Signed to Capricorn Records in 1973, the band released its self-titled debut album, toured with labelmates The Allman Brothers Band, and put out the first of their three signature songs, "Can't You See." Two years later came "Fire on the Mountain," and in 1977, "Heard It in a Love Song."

The Marshall Tucker Band has, for four decades, continued to tour, with the new audience helping to keep them on the road for about 100 nights in a normal year. And the group isn't too far off of reaching that level of activity this year, even though touring has meant complying with COVID protocols. Gray is happy to have some shows to play.

"Here's a band that hasn't really done anything but play," Gray says. "That's what the Marshall Tucker Band is about. If you want to know what the band's about in actuality, that's it. Even from the beginning, we just wanted to go out and play. First, to buy beer, to be honest."

Gray is the only remaining original member in The Marshall Tucker Band. Tommy Caldwell died in an auto accident in 1980. Four years later, Toy Caldwell, McCorkle, and Riddle retired, leaving Eubanks and Gray running the band. Eubanks retired in 1996.

"Tommy died in 1980 in a car wreck, but before that, in 1971, we had an attorney draw up an agreement, we all had first right of refusal about everything with the band, everything was split equally by six," Gray says. "Two or three shares I bought up when guys got tired of it and wanted to get off the road. That's how I ended up with The Marshall Tucker Band.

The Marshall Tucker Band, of late, has regularly played the Grand Ole Opry, CMA Fan Fest, and landed a slot at the Stagecoach Festival, the country version of the Coachella festival — it only took 40 years for the country music industry to figure out that the band had country songs, all the way back to the first album. The group these days typically plays clubs, theaters, casinos — venues that Gray says are perfect for his band, small enough that he'll know just what the MTB is in for before he walks in the door." When the bus pulls up, I see how many pickups are in the parking lot. That way I know we're going to have a good time," Gray says. "I don't want to see too many vans. Those are the moms bringing the kids to see us for the first time. Our biggest, largest drawing audience is 18-37 now. We love playing for them. There's nothing better for me than putting that microphone out in the audience and having them sing 'Can't You See' and 'Fire on the Mountain' or some of the more obscure songs."