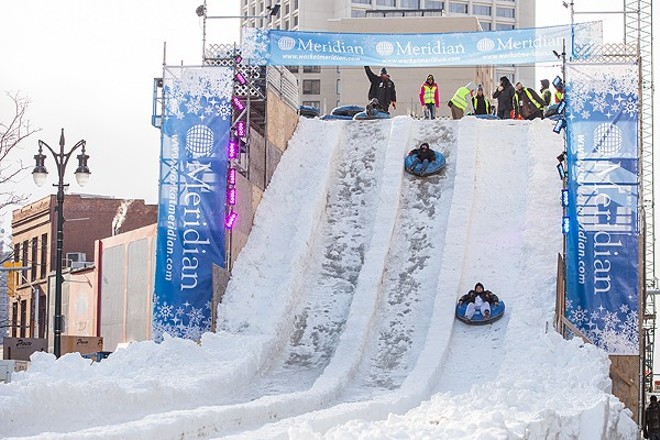 The Winter Blast festival is plowing ahead with its move from Detroit to Royal Oak, bringing many of the activities the fest has been known for with it since it debuted downtown in 2005.

Organizers of the retooled event, now known as Winter Blast Royal Oak presented by the Soaring Eagle Casino & Resort, announced additional details on Tuesday, including activities and an entertainment lineup.

Of course, there's no ice rink in downtown Royal Oak like the one at Detroit's Campus Martius Park, so organizers are building one. M3 Investments is sponsoring an outdoor rink that will be constructed in the Royal Oak Farmers Market parking lot at 316 E. Eleven Mile Rd. Skating is free, and skate rentals are $5 for kids and $10 for adults.

"Winter Blast just wouldn't be the same without ice skating, so we're proud to bring to life the M3 Rink at Royal Oak Farmers Market to give attendees the chance to glide, spin, lunge, or perform whatever skills they may have on ice skates and to do it for free throughout the festival weekend," fest producer Jon Witz said in a statement.

The rink will remain open after Winter Blast Royal Oak, through March 13, with hours and pricing to be announced.

Official after-parties are set for The Morrie and Tequila Blue.

More information, including the full lineup, is available at winterblast.com.