You don’t have a sexual problem, you just need some dirty talk 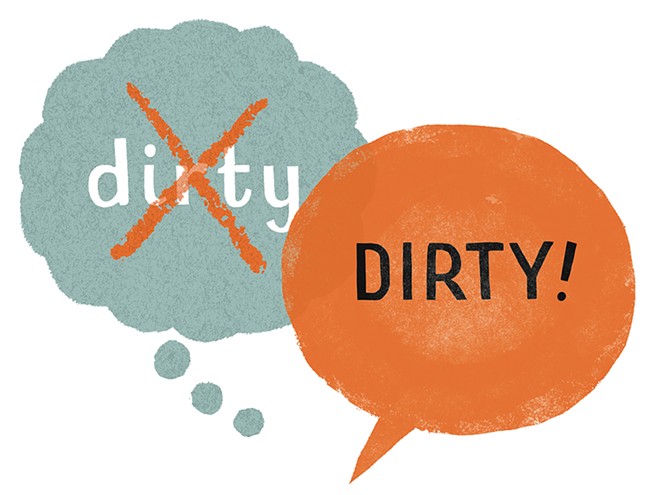 Joe Newton
Dirty talk can keep you in the moment without derailing your orgasms.

Long time reader here, first-time writer. I’m a bisexual woman. I’ve been married to a straight man for eight years. Our marriage and our sex life are amazing. We communicate well, and we have a lot of fun together. You probably think you know where this is going, Dan, but trust me this isn’t your typical bisexual-person-married-to-a-straight-person problem.

Do you think there is a way I can achieve this? Is it fucked up that I have to think about something else to orgasm when I’m with a man? Help me! I haven’t told my husband this because it would crush me to learn he had to “dip out” to get off.

—Being In Moment In Straight Sex Is No-Go

P.S. I fully explored the possibility of being a lesbian but I’m sure I’m not. I really, really like men. I like men a lot. I couldn’t live without them.

There’s a solution here, BIMISSING, one that would allow you to remain in the moment without sacrificing your orgasms.

Zooming out for a quick second, BIMISSING, first let’s put your problem in perspective. You married to a man you love, you have a great sex life, and you’re getting off. You’re winning. And you’re not the only person with this… well, I don’t wanna call it a “problem,” BIMISSING, because for some people fantasizing during partnered sex — the kind of dipping out you describe — is a solution. Lots of people need to imagine a particular scenario and/or particular cast of characters to get themselves the point of “orgasmic inevitability,” to use one of my favorite phrases from the sex-research literature, and if entertaining go-to fantasies during partnered sex is the thing that gets them to that point, they shouldn’t hesitate to entertain those fantasies. In other words, BIMISSING, while I wanna offer you a fix, I don’t want you — or anyone like you — to think you’re broken. Or fucked up. Because you’re not.

Now, here’s the simple, easy, obvious fix — here’s the sex hack — that’ll keep you in the moment without derailing your orgasms: dirty talk.

Now, if you’re already doing that kind of dirty talk, BIMISSING, great. If you’re not, start. Then, once you’ve mastered Gonna, Doing, Did (GDD) basics, you need to start mixing your basic GDD dirty talk together with dirty talk about your go-to fantasies.

But before you can do that, BIMISSING, you are gonna have to level with your husband about these fantasies and your reliance on them. Telling your husband that you’ve always had to think about gay sex to get to the point of orgasmic inevitability — while emphasizing that he makes your pussy wet, and you love having sex with him — is definitely a risk. He could have a bad reaction. If he has a problem with it, BIMISSING, tell him you’re like a woman who can’t come from vaginal intercourse alone, a.k.a., most women, only instead of needing to press a vibrator against your clit during intercourse to get off, you need to press a mental image of gay sex against your brain to get off.

So, yeah, your husband could have hurt feelings, and it could take some time to work through this. But think of the potential rewards! Instead of leaving your husband behind when you start fantasizing about men fucking men and women fucking women, you’ll get to take him along! (And I don’t want to tell on straight guys here, but some of them really like hearing about two women fucking. Your husband could be one of those guys.)

“BIMISSING can be fully present in her body and feel the great pleasure of sex with her husband — and know that this is where her pleasure is coming from physically — while also be intentional about bringing this fantasy into her mind at the same time,” said Dr. Lori Brotto, a clinical psychologist and a sex researcher at the University of British Columbia and the author of Better Sex Through Mindfulness: How Women Can Cultivate Desire. “And if BIMISSING can share her fantasy out loud, she’ll be able to hear herself sharing the details of this fantasy, which is an auditory trigger that will keep her rooted in the here-and-now even more and intensify the pleasure. If her husband responds with his own sounds of pleasure,” or with fantasies of his own that build on yours, “that will further anchor BIMISSING in the present moment.”

P.S. I feel the exact same way — really like men, couldn’t live without men — and I’m not a lesbian either. Coincidence? I don’t think so. There are no coincidences.

This is my first time asking for your advice. I'm a gay man in his early fifties, a bit heavy, but people tell me I'm handsome. I haven't gotten close to a man, let alone had sex with one, in many years. I decided to try some dating apps. In the past week I've had two hook-ups, both safe, but neither was successful. The first went south very quickly, the second went better with the other guy getting off. While I very much enjoyed the physical closeness, I couldn't get hard either time. I have no problems with that by itself. I tried relaxing and just getting into the experience, but I just couldn't get aroused. Both guys were attractive, the second even more so, but I couldn't get into it either time. Any thoughts on how I might be able to get past this block? I just feel like giving up on physical relationships for good.

Take the pressure off yourself and your dick by telling your next partner that you wanna focus on his dick, not yours. And be honest about why: “I’ve been out of action for a few years and I’m easing back in to sex and right now it’s working better for me to focus on getting the other guy off.” Then pop a Viagra, put on a cock ring, relax, and enjoy. If you wind up being able to get off with him, great. If you don’t but you liked the guy and he enjoyed being with you, suggest getting together again. Then with those first-time-with-a-new-guy jitters out of the way, MFT, it’ll be easier to get out of your own way, get hard, and stay hard.

It’ll also help if you gave less weight to the one experience that went south quickly and more to the one that “went better.” Start rounding that second experience up to a success instead of down to a defeat, OK?

Ask: [email protected]. Follow Dan Savage on Twitter @FakeDanSavage. The Savage Lovecast, books, merch, and more are all at savage.love.