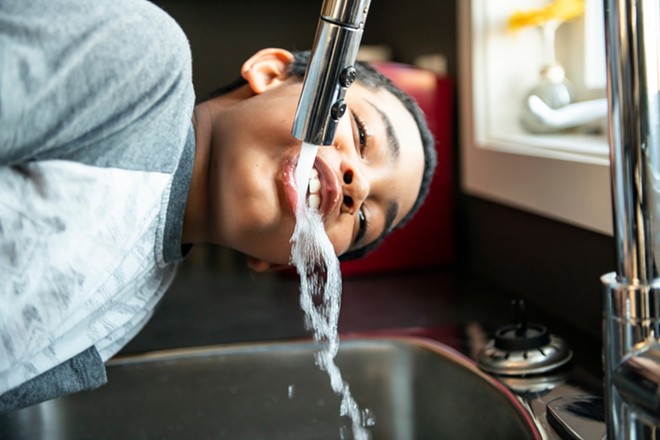 Shutterstock
A Metro Times analysis found an alarming cocktail of toxic chemicals coursing through tap water in virtually every community in metro Detroit.

Flint and Benton Harbor aren’t the only Michigan communities that have been plagued with tainted drinking water. Metro Detroit residents are unwittingly drinking tap water contaminated with substances linked to cancer, brain damage, liver disease, and other serious health dangers, according to a new report by a national group of scientists.

Over the past two years, 56 new contaminants have been identified in drinking water, a list that includes PFAS, a class of synthetic chemicals, as well as pesticides, radioactive materials, and water disinfectant byproducts.

The Environmental Working Group, an independent nonprofit that advocates for clean water, compiled the list from tap water quality reports and included it in a searchable database for every ZIP code in the U.S.

A Metro Times analysis of the database found an alarming cocktail of toxic chemicals coursing through tap water in virtually every community in metro Detroit. The contamination crosses racial and class lines and is as prevalent in higher-income communities as it is in lower-income ones.

Many of the chemicals, which exceed what scientists consider safe, are known to cause cancer, birth defects, hormone disruptions, nervous systems problems, and brain, liver, and kidney damage.

While many of the chemicals are relatively safe to consume in trace amounts, the EWG says the U.S. Environmental Protection Agency’s drinking water regulations are “out of date” and permit levels of contamination that are dangerous to consumers.

“Most people don’t realize how many contaminants are in their drinking water,” Sydney Evans, a science analyst for EWG, tells Metro Times. “That should be concerning to people. Most people think their water is perfectly safe and pure because it’s treated, but that’s not true.”

Many of the contaminants in metro Detroit’s water exceed EWG’s limits by many times, including radium, nitrate, hexavalent chromium, haloacetic acids, and total trihalomethanes, all of which are hazardous and believed to be carcinogenic.

While the Flint water crisis drew national attention to the dangers of lead, the hazards elsewhere aren’t widely known because many of the contaminants are just beginning to be monitored and fall below antiquated drinking water standards, says EWG President Ken Cook.

“The EPA has become very good at constantly reassuring the public that all is well with the water coming out of their taps,” Cook says. “That message is music to the ears of polluters who’ve fouled source waters and water utilities wary of treatment and infrastructure costs. But it’s just not true — and the EPA’s own scientists know it.”

The drinking water in 39 communities in Wayne, Oakland, and Macomb counties have 10 or more contaminants that exceed EWG standards. Hazel Park, Dearborn Heights, St. Clair Shores, Roseville, Waterford Township, Melvindale, and Woodhaven have the most, with 13 contaminants above EWG limits.

In many metro Detroit communities, there are three contaminants that exceed EWG’s limits by more than 100 times. They are byproducts of the disinfection process.

One is haloacetic acids, which the National Toxicology Program recently added to a list of recognized cancer-causing agents. It has also been linked to low birth rates and is just beginning to be tracked by the EPA.

There are two classes of haloacetic acids in the database — HAA9 and HAA5 — and both are dangerous. In Dearborn Heights, HAA9 exceeds EWGs limits by more than 400 times. Detroit and numerous other local communities have more than 300 times the amount of HAA9 that EWG deems safe.

The contamination crosses racial and class lines and is as prevalent in higher-income communities as it is in lower-income ones.

Another disinfectant byproduct found in large quantities is bromodichloromethane, which studies have linked to cancer, liver and kidney damage, decreases in immune response, and early pregnancy miscarriages. Many communities have between 100 times and 200 times the amount of bromodichloromethane that is considered safe.

Metro Detroit communities also have drinking water that has high levels of trihalomethanes, which are a chemical byproduct of chlorine that is added to the water to disinfect it. Sterling Heights, Hazel Park, Allen Park, and Woodhaven each have more than 200 times the amount of trihalomethanes that EWG deems safe.

Drinking water in Detroit, the largest city in Michigan, has 12 contaminants, six of which exceed EWG’s health guidelines. HAA9 is 335 times higher than EWG’s limits, while HAA5 is 127 times higher, and total trihalomethanes are 198 times higher.

Drinking water in many local communities also has high levels of arsenic, nitrates, radium, and hexavalent chromium, all of which are known carcinogens and can cause severe health problems if consumed at high levels.

Dozens of metro Detroit communities have drinking water with high levels of nitrate, which EWG considers unsafe. Nitrate is associated with an increased risk of cancer birth defects, stillbirths, type 2 diabetes, and thyroid and kidney disease.

Since 1992, the Environmental Protection Agency's health standard for nitrate has been 10 parts per million (ppm). But in the past few years, research has suggested that levels well below 10 ppm can cause adverse health effects, especially in infants and those who are pregnant.

According to the National Cancer Institute, long-term exposure to 5 ppm can increase the risk of colon cancer, stomach cancer, and other cancers.

In 2016, the EPA acknowledged that nitrate runoff “remains the single greatest challenge to our Nation’s water quality and presents a growing threat to public health and local economies.”

The EPA began to reevaluate the accepted federal limit of 10 ppm, but the Trump administration abruptly put an end to it.

EWG recommends no more than 0.14 ppm.

More than three dozen metro Detroit communities have nitrate levels that are at least twice EWG’s standards. Detroit has one of the highest levels of nitrate at .573 ppm, or more than four times what EWG considers safe.

For utilities, it’s difficult and expensive to remove nitrate from water.

“Arsenic is potent at these levels,” Evans says.

Arsenic is a naturally occurring mineral, but it’s highly toxic. Long-term exposure can cause cancer, skin lesions, birth defects, and even death, and is associated with heart disease and diabetes, according to the World Health Organization.

Also detected in local tap water was hexavalent chromium, a highly toxic carcinogen perhaps best known from the 2000 movie Erin Brockovich, based on a true story about contaminated drinking water in Hinkley, California. It can cause lung, nasal, and sinus cancers, as well as pulmonary congestion, abdominal pain, and damage to the eyes, skin, kidneys, and liver.

Despite the known hazards, the EPA set no legal limit for hexavalent chromium.

Radium, a radioactive contaminant linked to cancer, leukemia, birth defects, and blood and skin damage, was also detected in local drinking water supplies and is especially problematic for children. In Detroit, the radium exceeded EWG’s limit by 12 times.

Most communities in metro Detroit have radium levels that are more than 13 times higher than what EWG considers safe.

The EPA’s legal limit was set in 1976 and has not been changed despite numerous research that shows even small amounts of radium are dangerous.

Since the passage of the Safe Drinking Water Act in 1976, the EPA has been responsible for overseeing water quality. But the federal agency has not set a new tap water standard in nearly 20 years, and some standards are more than four decades old, even as researchers learn more about the dangers of the contaminants.

The EPA also has not added any new contaminants to its regulated list since 2000.

“The regulations aren’t keeping up with all the new research,” Evans says. “Even though (many contaminants) are below legal limits, they still have been linked to health problems at the level they are allowed in drinking water.”

“The Environmental Protection Agency’s Office of Groundwater and Drinking Water has demonstrated for decades that it is utterly incapable of standing up to pressure from water utilities and polluters to protect human health from the dozens of toxic contaminants in America’s drinking water,” Cook says.

“We looked at how many Great Lakes states had adopted more stringent drinking water regulations than those at the federal level or adopted standards for contaminants that aren't regulated at all at the federal level,” Leonard tells Metro Times. “Instances of states doing this are the exception; typically states don’t want to get out ahead of the EPA and would rather wait for them.”

In the mid-1990s, Congress directed the EPA to identify unregulated contaminants in drinking water after a parasite, cryptosporidium, found its way into Milwaukee’s water in 1993 and sickened an estimated 400,000 people and resulted in at least 69 deaths. At the time, it was the largest documented waterborne outbreak in U.S. history.

Through amendments in the Safe Drinking Water Act, Congress required the EPA to add potential hazards to the contaminant candidate list (CCL), which was supposed to be updated every five years. The EPA was also ordered to undertake a review of drinking water standards every six years to determine if the list needs to be updated.

“However, the EPA has really struggled with implementing these requirements,” Leonard says. “They are regularly late — oftentimes by several years — in publishing the CCL and making their regulatory determinations. This process has also resulted in little change. The EPA has only decided to create standards for one unregulated contaminant since 1996 (perchlorate) and very rarely revises existing drinking water standards. The process also takes a very long time.”

PFAS, for example, was included on the CCL in 2009, Leonard says. But it took 11 years for the EPA to propose a preliminary determination to regulate PFAS in drinking water.

Clean water advocates have been calling for federal funding to help cash-strapped utilities undergo infrastructure changes that would be needed to comply with higher standards. But EWG scientists say the EPA is more worried about adding to the financial burden on utilities than ensuring tap water is safe.

“The utilities are the ones who have to take those costs and additional treatments into consideration,” Evans says. “The burden tends to fall on the community and the utility. It’s a tangled web that creates an ineffective regulatory process.”

Scientists recommend filters for tap water, but even that is not enough to prevent many of the contaminants from causing health problems, they say. What’s needed are standards that don’t require filters and additional costs to the consumers.

“We don’t want safe drinking water to be a privilege,” Evans says. “We are pushing for broader changes.”