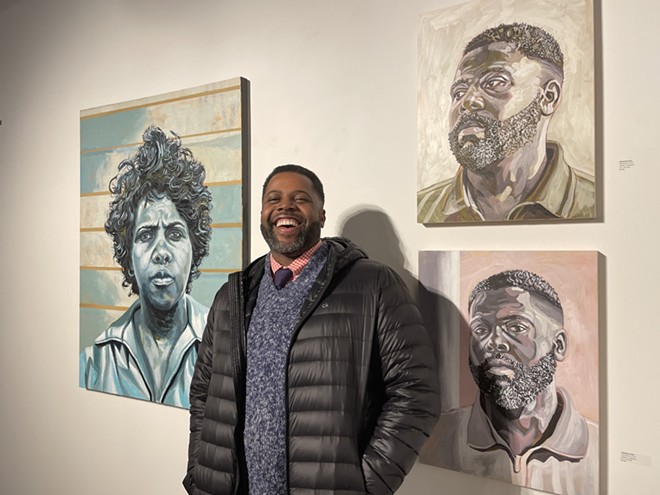 Randiah Camille Green
Artist Senghor Reid next to his paintings at the Revelations exhibit.

In art, just like in life, nothing is ever quite as simple as it seems. If you take the paintings at M Contemporary Art’s newest exhibition, Revelations, at face value, they might seem like just a random collection.

But in reality, they are all connected.

Cydney Camps is pursuing an MFA at Cranbrook Art Academy, where Senghor Reid is currently teaching. Sabrina Nelson was one of Reid’s teachers in high school. Sydney G. James went to high school at Cass Tech, where Reid was once an art teacher. Richard Lewis also graduated from Cass and has been an enormous mentor to numerous Detroit artists.

Adding another layer of interconnectedness to the mix, Reid was my high school teacher at Cass Tech. He’s also the son of acclaimed artist Shirley Woodson, who has a solo exhibition at the Detroit Institute of Arts at 85 years old.

The universe does not bring people together by coincidence. 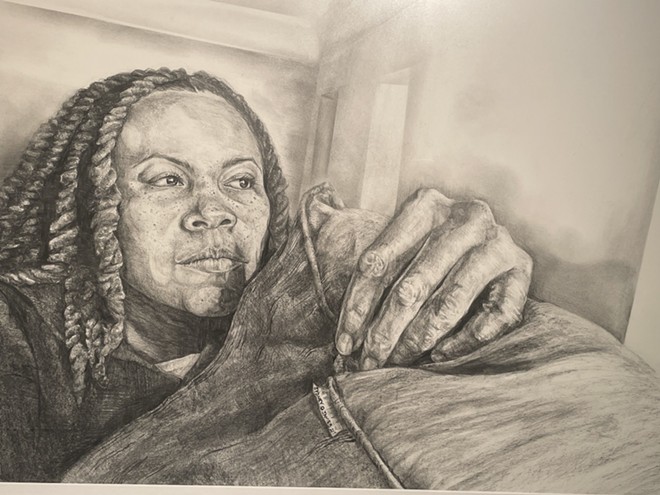 One of Reid’s paintings in Revelations is a portrait of his mother, based on a photograph his father took before Reid was born. With muted hues of blue, the painting shows Woodson suspended in time with a somber look on her face. Reid captures the texture and movement of her hair in such detail that it looks as if it would actually feel like hair if you reached out and touched it.

At the opening for the show last Friday, Reid told Metro Times the story behind the photo the painting references.

“My father’s grandfather was on his deathbed and family was coming from all over town to see him for one last time, so my dad took his camera and caught my mom in this moment,” he says. “You know your mom as your mom, but suddenly you see a photo of her before you were even thought of. Then you see her as a woman, an individual out in the world who is evolving just like you are now.”

Reid has two other paintings in the show which are portraits of himself bathed in moonlight.

Though they range in experience from art educators who have honed their craft over decades to up-and-coming artists constantly revealing new layers of their skill, each artist shines in their own right. 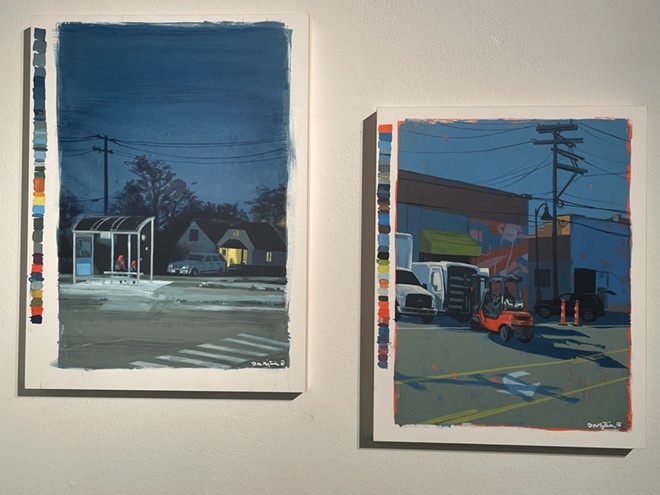 James, who is usually known for her bold murals celebrating the beauty of Black women, debuts a pencil drawing of herself in introspection as she gazes off into the distance in a daydream.

Don Kilpatrick III presents two familiar Detroit scenes in “Midnight at McNichols and Joseph Campau” and “Unloading at Russel Street.” Viewers who live in Detroit or have ever visited the Eastern Market will find the houses, bus stops, and commercial buildings in the paintings comforting.

Then there’s Sabrina Nelson’s “Don’t Mess With These/ These Either.” The diptych (two panels of connected work) shows a nude woman clutching a feather like a weapon as more feathers blow in the wind beside her.

Nelson explains the painting in a glossy exhibition booklet, which is available at the gallery.

“... the feathers are my children and black and brown children that have been lost in our communities. My body is weeping for them, for the mothers. I’m vulnerable, I’m growing older, and I’m starting to look at myself as a reflection of God, as medicine, as a protector, and I’m saying, ‘Don’t fuck with my kids,’” her statement reads.

If nothing else, Revelations urges viewers to look beyond the surface to find the true nature, nuance, and beauty behind all things.