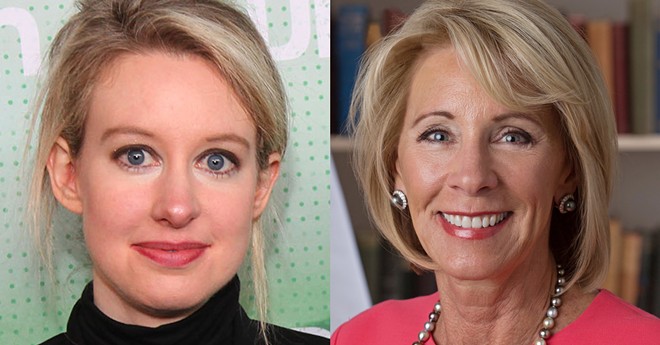 Elizabeth Holmes became the youngest female billionaire in America thanks to her Silicon Valley startup Theranos, which was once valued at $9 billion. The company promised to revolutionize medicine by running hundreds of diagnostic tests using just a finger prick’s worth of blood, but there was just one teensy little problem — the technology never actually worked. On Monday, a federal jury found Holmes guilty of criminal fraud after nearly four months of testimony and jury deliberations that lasted seven days.

Among those hoodwinked by Holmes was Michigan's own DeVos family, whose Lakeshore Capital Management invested a staggering $100 million to Theranos. According to October testimony from DeVos money manager Lisa Peterson, the Devos family agreed to invest after Holmes treated them to a five-hour tour at the Theranos headquarters in Palo Alto, California.

At the time, in 2014, Holmes was a media darling, wearing a Steve Jobs-esque black turtleneck and appearing on the cover of magazines like Fortune, T: The New York Times Style Magazine, Inc., and Forbes, which ranked her No. 110 on its Forbes 400. Theranos had also created a 55-page report it circulated to investors that included the logos of the pharmaceutical companies Pfizer, Schering-Plough, and GlaxoSmithKline, which Peterson testified helped persuade the DeVos family to invest. None of the pharmaceutical companies had signed off on the report, however.

The DeVos family forked over the cash without any due diligence because "we didn't think we needed it," according to the testimony. The family is believed to be worth some $2 billion, according to Forbes, having made much of their fortune through Michigan-based multi-level marketing company Amway, which was co-founded by the father of Dick DeVos, the husband of former U.S. Secretary of Education Betsy DeVos.

Holmes was convicted of four out of 11 counts of conspiracy and wire fraud, with the claim against the DeVos family being one of them. Other high-profile Theranos investors included Fox News media tycoon Rupert Murdoch, former Secretary of State Henry Kissinger, and Walmart's Walton family.

The jury didn’t reach a verdict on three of the counts, including charges of fraud against patients who paid for inaccurate blood tests when the technology was briefly used in Walgreens pharmacies in Arizona and California, though Holmes and others still face charges for defrauding patients in a civil suit.

Holmes faces up to 20 years in prison, and is expected to appeal. Assistant U.S. Attorney Jeffrey Schenk told the jury that Holmes "chose fraud over business failure. She chose to be dishonest with her investors and patients. That choice was not only callous, it was criminal." The case could serve as a warning to other white-collar criminals, especially those in Silicon Valley, where tall tales are used to inflate the value of startups.

The Theranos saga is set to be dramatized in Bad Blood, an upcoming film directed by The Big Short and Don't Look Up director Adam McKay, based on the book of the same name by John Carreyrou, whose Wall Street Journal reporting led to Theranos’s downfall. Holmes is set to be played by actress Jennifer Lawrence, who previously collaborated with McKay in Don’t Look Up.