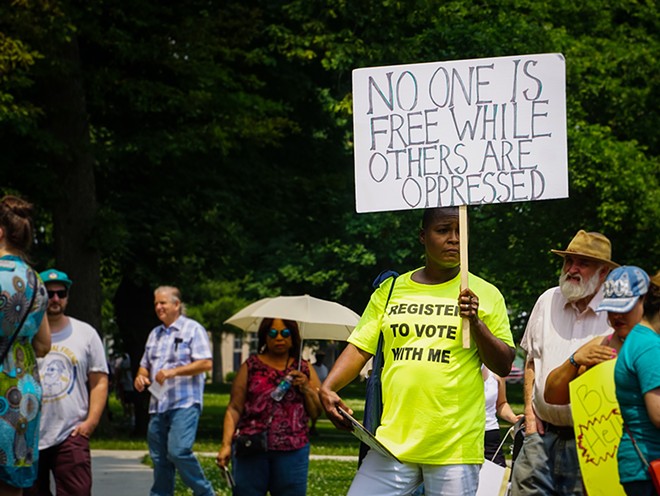 Stephanie Kenner / Shutterstock.com
An activist in Detroit holds a protest sign that says "No one is free while others are oppressed."

A petition from the group "Secure MI Vote" is aiming to circumvent Michigan's regular legislative channels and pass laws restricting many residents' ability to vote.

Lawmakers passed changes to the state's voter ID laws this year, but faced vetoes from the governor for requiring absentee ballot requests to include photo ID, and removing the option for voters to sign an affidavit attesting they are who they say they are.

Christina Schlitt, co-president of the League of Women Voters of Michigan, said if the petition can get the equivalent of 8% of the turnout for the most recent gubernatorial election, the Legislature may be able to do it on its own.

"If they do get the 340,047 good signatures, then the legislation is simply adopted," Schlitt explained. "The governor will not be able to veto."

Gov. Gretchen Whitmer and 16 other governors recently urged the U.S. Senate to pass the Freedom to Vote Act and the John Lewis Voting Rights Advancement, saying they are needed to stop this and other recent assaults on voting rights.

In 2018, Michigan voters approved a ballot initiative to make eight changes to the election code, including ways to make it easier to vote; automatic voter registration, same-day voter registration and no-excuse absentee voting.

Schlitt noted it also added ways to secure elections, such as through audits.

"The elections system has been proven to be not compromised," Schlitt asserted. "The integrity is there. Prop 3 in 2018 included post-election audits, and those have been conducted. There has not been any cheating going on."

The Defend Black Voters Coalition has released a pledge, calling on corporations in Michigan to cut off financial support to lawmakers pushing the bills, as well as congressional lawmakers who were involved in efforts to overturn the 2020 election.