Cop scared Oxford students by saying 'bro,' causing them to flee for their lives 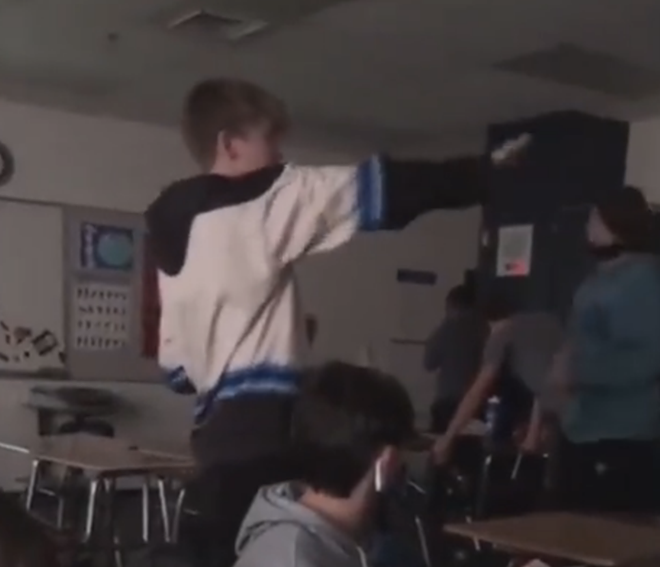 Screengrab/TikTok, @shwifty766
Students barricaded themselves in a classroom at Oxford High School as an active shooter stalked the halls.

The video, which has been uploaded to TikTok and has amassed millions of views across social media, shows students barricaded in a classroom as they are faced with trusting a voice claiming to be law enforcement on the other side of the room's locked door.

"Sheriff's office, it's safe to come out," the voice bellowed from the hallway.

"We're not willing to take that risk right now," a student responded, unsure if the voice was that of the shooter.

The voice then said: "Come to the door and see my badge, bro."

Students determined that his use of the word "bro" was a "red flag," assuming a member of law enforcement would not use such informal language, when in fact, the opposite was true. The scare caused the students to flee out of a window in fear.

During a press conference Wednesday, Bouchard addressed "a great deal of false information" that has been circulating online regarding the suspect, his motive, and the timeline of events that transpired on Tuesday and those events that may have led up to the rampage. According to Bouchard, the voice in the video belonged to an officer, who was using casual slang to try to calm the students.

"We’ve now been able to determine that was not the suspect," Bouchard said. "More than likely it was one of our plainclothes detectives. He may have been talking 'bro' in a conversational manner to try to bring them down from the crisis."


Update from the sheriff on this video:

The individual knocking on the door was NOT the suspect, it was a plainclothes deputy using causal language to calm the situation https://t.co/rXcI0dN5Wr


Uh, bro? Don't you think high school students would associate the word "bro" with their peers, one of whom opened fire, and not that of a police officer?

According to ALICE training, those who are barricaded should remain silent or create sound distractions to misdirect the shooter's aim. Confronting a shooter should be a last resort.

School safety experts told The 74, an education news website, that law enforcement should not have attempted to enter a classroom under lockdown, especially by trying to convince students to open the door so casually.

Mo Canady, executive director of the National Association for School Resource Officers, said the actions of the officer in Oxford contradicts a lockdown scenario.

"The doors are secured for a reason: Once you’re locked in, you don’t move until the threat comes into the classroom or an authority figure opens that door and lets everyone know it’s clear," Canady told The 74. "The video showing the students’ unwillingness to open the classroom door suggests that this is a school that has trained properly on lockdowns and trained students as to what to do."

Bouchard told reporters Wednesday that the ALICE training Oxford students and staff had done likely saved lives, as there was evidence throughout the school that students barricaded doors as the training advises.

Crumbley, who was publicly named for the first time yesterday by the Oakland County Prosecutors office, faces one count of terrorism causing death, four counts of first-degree murder, seven counts of assault with intent to murder, and 12 counts of possession of a firearm in the commission of a felony.

Crumbley had initially been housed at a juvenile detention facility but will be transported to Oakland County Jail, an adult facility, where he will be placed in isolation. If convicted, he faces life up to life in prison.

When Crumbley was detained, officials say he had 18 rounds of unused ammunition on him, The Detroit Free Press reports.

Of those killed, Justin Shilling, 15, succumbed to gunshot wounds sustained during the shooting around 10 a.m. Wednesday at Pontiac's McLaren Oakland Hospital. Others have been identified as Tate Myre, age 16; Hana St. Julian, 14; and Madisyn Baldwin, 17.