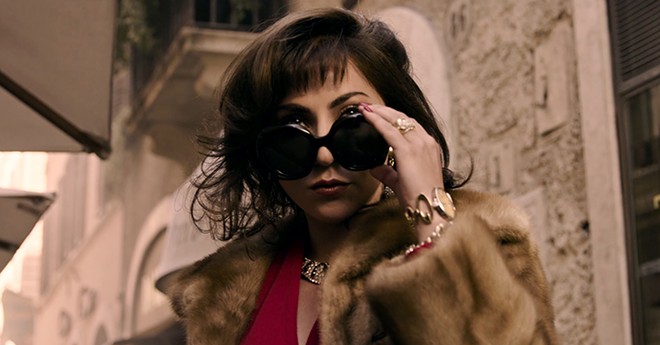 A lot of people in my life seem to need House of Gucci pretty badly in theirs. More than most new releases of late (and certainly more than acclaimed director Ridley Scott’s last and largely slept-on The Last Duel), Gucci, based on the family behind the high-end Italian fashion brand, has been met with a kind of eager, almost reverential anticipation — but of what, exactly? Those I’ve spoken with have been less than clear, but, from what I can gather, they’re praying for a work that’s decadent, escapist, campy, and broad: the filmic equivalent of a lavish dessert spread, a dance party, a tempestuous high-class romp. And who could object to that?

While some will surely differ here, I can’t say that the consciously operatic Gucci answers to these prayers. In a film that ought rightly to have no fewer than four Italo-disco scenes, six runway sequences, and five or six house parties at minimum, no more than a couple of each are to be found here. (The disco, at least, looks fine.) For Gucci, this absence is a problem, for fashion empires are built on foundations of reception and of taste, and the film loses much for lacking a sense of the society its characters operate in. Wealth isn’t just a state but a performance, and its icons need to be seen for their full state of potency to be realized. For a sense of the brand and family’s provenance (“it’s a family company,” many member-shareholders insist), we need to see people worshipping at their altar — but bereft of that, the film’s flashy pantheon is left largely without believers or even notable detractors. Since Gucci was shot during the pandemic this spring, the omission of many crowd scenes is certainly comprehensible — but that doesn’t mean their lost impact isn’t felt.

That leaves the film to focus on another rightful narrative cornerstone for any story about the rich: the world of power plays and class-striving, unfolding over decades here within the Guccis’ esteemed house. These take place largely between the headline players in the film’s ensemble, and within various manses, villas, and fine penthouses. Things kick off in the 1970s with the reticent, enigmatic Maurizio Gucci (Adam Driver) meet-cuteing and swiftly falling for middle-class striver Patrizia Reggiani (Lady Gaga) despite the protests of his epicurean, elitist, and more traditional father Rodolfo (a perfectly controlled Jeremy Irons). Rodolfo stays largely out of touch with his crusty, more worldly brother Aldo (Al Pacino), who’s dedicated to expanding the brand to new retail markets with the faltering assistance of his mewling failson Paolo (Jared Leto, obscene as ever). Jockeying between these players involves flirtations, forgeries, absurd acts of flattery, and consultations with cable-channel fortune-tellers. Patrizia stands less as a power broker herself than as the film’s most active and efficient operator, who Rodolfo regards with suspicion as a potential gold-digger for her interest in his only son. The film makes no plain claims on this but treats her motives, loyalties, and feelings as a central question, beginning as it does with her entry into the house.

Like most in-groups, Scott’s Gucci family proves protective of its assets, and thus wary of all manner of outsiders. Maurizio, whose late mother was Swiss-German, is regarded a bit questioningly, and Maurizio’s not much of a participant in the family brand. Patrizia, likewise, is considered an outsider initially (as we are) but learns swiftly to play her part, as giddy with her piles of (inevitably) assumed riches as she ever was with Maurizio’s love. Traipsing around in fits and prints that tend to straddle the worlds of the remarkable and the absurd, the work she does to curry favor with new in-laws serves the double function of celebrating the film’s upscale world and helping ensure she gets what’s hers.

Enunciating each line in a laboriously accented staccato, Gaga’s Patrizia spends her screen time extolling the exceptionalism of the House of Gucci and asking ever more of Maurizio and his family — and it’s hard to blame her. At one point, Pacino’s Aldo tells her exactly what she wants to hear at one of their New York stores: “You see it, you want it, it’s yours.” The road Patrizia forges, from her initial starry-eyed beholding of an empire to slow-blossoming but eventually staggering levels of covetousness, is laid with a kaleidoscopic range of uncontrolled sentiments toward the wealth and power she seeks. Her admittedly patchy, high-camp performance is riven with flashes of eat-the-rich attitude, a strain of resentment for the thing she desires most. At the same time, she’s an outsider and voyeur, eyeing and then worshipping at the temple of the Gucci brand (as certain viewers might). Over time, she becomes perhaps its clearest exponent, resembling a Real Housewives viewer who eventually marries up, and stands as the member of the film’s main cast who wears Gucci’s ornaments — and Gucci’s lines — the best. When various cast members say “Gucci will pay for it,” it’s an invocation of a kind of elemental law, a statement that in their world is always true.

While Irons’ Rodolfo, an educated and relatively tasteful patriarch (he’s basically an island in this), represents an older world of more exclusive indicators of class, the Gucci heirs — and Patrizia, too — see in the brand a web of future possibilities. Some see a populist and willful cheapening of Gucci through the dissemination of caps and baubles and mugs — all welcome revenue sources. Others, like Pacino’s Aldo, see a road into luxury markets beyond the west. The cartoonish Paolo, a minority shareholder, yearns to see his own designs made real on and past the runway, regarding himself as a frustrated artist.

There’s a lot to be had here, not just in the film’s family dynamics and power plays, but in this examination of an old family-owned business weighing conversion to a kind of franchise, in the thirst for riches fogging up romantic and familial love, and in the nature and power of Gucci’s somewhat crass, commodified signification of high-class taste. While Gaga brings the meatiest performance in terms of embodying what both spans all this and should be the film’s central question — the abiding and enduring question of what class is — the movie feels, in the end, confused. Denser with potential than actual sources of interest, and of aesthetic pleasure (for all its talk of beauty, the film looks workmanlike), this should-be grand story winds up feeling thinner and weaker than it ought to. Unable to live up to either its most memorable peaks or its own self-worshipping tones, the wealthy have here — as they so often do — let the rest of us down.