In ‘Spencer,’ the People’s Princess drives a Ferrari 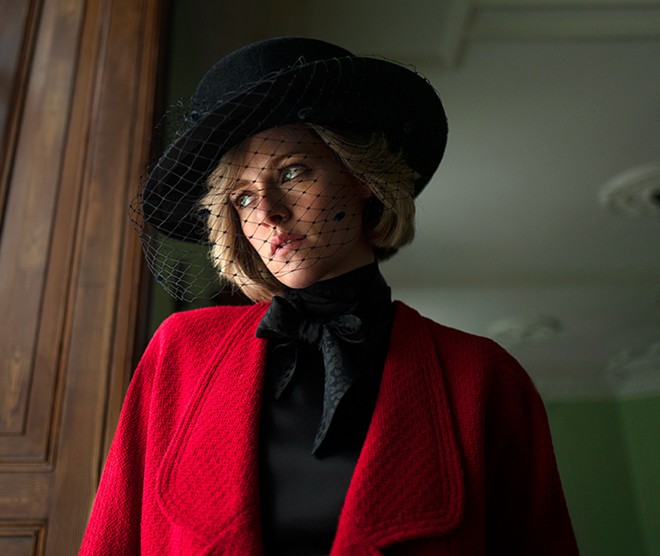 Promising a "fable from a true tragedy" in its opening title card, Pablo Larraín's newest glimpse into the life of a single character in Princess Diana — following the similarly named Neruda, Jackie, and a less on-brand aesthetic experiment in the purer fiction Ema — tips its hand right then. Chasing the gravity (and material) provided by borrowings from real life but happily giving up any need for fidelity to it, the film treats this tension alone — a thing movies and books have always done — as a subversion on its own. But believing this to be transgressive is a tell by itself, suggesting a childlike concern with imposed norms of propriety, an outsized attention to what audiences might expect; only in the context of being on one's best behavior as a default setting could fictionalizing a weekend from thirty years ago seem like a revolt.

That self-satisfied air colors the writing and direction in Spencer throughout, mirroring the frothed-up workings of its gilded-cage melodrama. The film trails a closely mic'd Diana, Princess of Wales (née Spencer, played by Kristen Stewart) over a three-day country holiday in which she's beset on all sides by handlers. These avatars of constricting tradition cite the threat of paparazzi cameras as though they threaten concrete violence, using their concern for the Royals' reputation to justify all manner of unwelcome invasions into her privacy and daily life.

On finding these emissaries won't even raise the thermostat as a matter of tradition, Diana swiftly accuses them of "burying everyone in blankets," suggesting a repressive smothering that's underlined at Spencer's every frantic turn. And smothering it is; royals are weighed in on their arrival and departure to be sure they're eating well, outfits are selected well in advance, and timetables are enforced with maximal precision, with retired majors reading out each morning's breakfast offerings. Everything's a belabored operation, and this lavish extended-family gathering behaves less like a meeting of intimates than a second, more confined quasi-public square.

But just as oppressive are the film's blunt metaphors, which undermine the strength of its performers and its crew. Steven Knight's script simply isn't smart enough to offer the sly subversion the direction strives to amplify, nor does Larraín's hand achieve the kind of formal and tonal control to meet the level of his actors or his crew. Diana can't just compare herself (quite fairly) to an insect in a dish beneath a public-private microscope; she must also extend the metaphor to one of violent and impersonal dissection, and then draw endlessly upon a force-fed comparison between herself and the unjustly beheaded Anne Boleyn.

Larraín embraces this all quite eagerly, working with cinematographer Claire Mathon (previously of Atlantics and Portrait of a Lady on Fire) to shoot most everything in a kind of binary visual language and literalizing every metaphor. Spencer's mostly done in static, symmetrical wide shots of ordered processions and environments (manicured castle grounds, stuffed pantries, convoys of royal vehicles) contrasted with extreme, quite harried mobile close-ups (à la Darren Aronofsky's Requiem of a Dream or mother!) of Diana's neck and face, both equally "formal" in their own ways. To Larraín, this is psychological realism: the People's Princess vs. Royal Tradition, a war fought in microaggressions and incursions against individual and collective royal bodies. Diana's revolt against this costly and pointless machinery takes the form of tardiness, tirades against servants, forbidden maneuvers, and nighttime walks. Eating and dressing here prove particularly important territorial battles, as we're witness to multiple scenes of binges, purges, and pushing particular outfits. Suggesting a queasy link (as in last year's Swallow) between survival, mental health, and how women manage and maintain their bodies not just as a private matter but as public performance, the film's better moments swim in these quite-real tensions, only to be beaten until they're dead. The house's staffers closely watch and prod at Diana's oppressive daily habits, but that point's made both plain and early, raising the question of why Spencer doesn't have more to tell.

While a richer movie (like Phantom Thread, which this often evokes) might suggest these tensions more subtly or offhandedly, Spencer makes them nearly the sole subject, pitting Stewart's Diana against an atmosphere and a climate more than any particular figure. A standoff with her husband in the billiard room ("There are two of all of us," he tells her) makes concrete, external, and more treatable tensions which most of the film's running time is spent massaging and whipping up; more of this sort of confrontation would be welcome, but then Larraín and Knight would have to dig deeper. In this sense, Spencer is an almost strictly interior dramatization as much as a work of biopic hagiography. Nary a word of questioning that doesn't seem "mean" and thus ill-founded is breathed about Diana, who regards herself as a sort of populist for liking Les Mis and KFC while driving a Ferrari. Who among us hasn't suffered through a family holiday? In this and much else, the character and figure are presented as "relatable," and real, in spite of the script's treatment of her as a pretty jewel made up of flatly faceted psychic surfaces. Bulimic, stressed, independent yet addled, and a caring mother cuckolded by a standoffish, cheating spouse, her experiences and traits are all indeed ones a regular person might suffer through — but which don't on their own make for a well-rendered inner life.

For the task of giving Diana a sense of psychological reality, the film turns to Stewart. As an actress who's never made too great a career of impersonations, she does the tough work (like Joaquin Phoenix in something like The Master) of evoking a separate character by embracing and at times amplifying the irrepressible portions of her own manner and way of being. Adopting an odd, tut-tutting vocal rhythm and an often-furious but technically proper gait to match a wary default expression, Stewart's Diana is better for not simply being an imitation, feeling more lived-in for showing signs of both her own and Diana's anxious effort. Her stylings are backed, too, by Radiohead member Jonny Greenwood's brassy score, which is both constrained and frenetic, and by Jacqueline Durran's fine costuming, which helps present Diana as a more whole person than Stewart might.

Even so, Larraín and Mathon's habit of framing Diana in close-up forces us to lose much of what's great about Stewart's performances in work like Personal Shopper or Certain Women — the attenuated movements of her posture, arms, and hands. In making Stewart's face their visual subject more than anything else, they invite audience projection while constraining a great actress's actual capacity for expression, not grasping the nature of performance at best as a whole-body endeavor at which their lead excels.

With Stewart's Diana and her best peers onscreen railing against this and other trappings of a dimly rebellious film, Spencer is as much a prisoner of its own writing and direction as its lead is her surroundings. Meant to subvert more standard royal depictions but without much more to offer, this effort at empathy and humanization proves both obvious and dully repetitious, undeserving the considerable talent on hand.