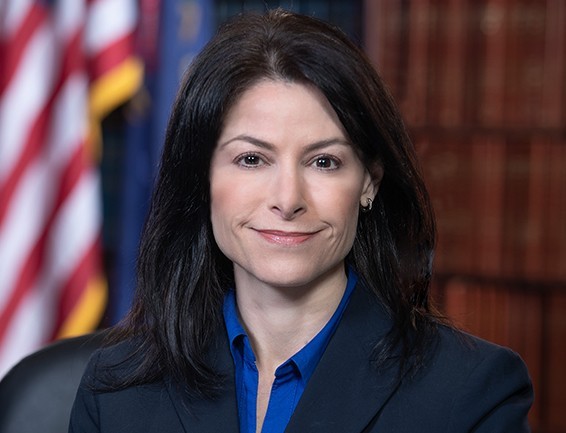 They're tasked with, somehow, keeping the public safe from violence, while fighting against things like human trafficking, opioid abuse, and illegal business practices. They also work to preserve their respective state's natural resources, as well as oversee lawyers, investigators, and serving as legal counsel to state officers, and represent the people in civil and criminal matters before trial, courts, and the supreme courts.

Of all the roles an attorney general must play, however, it is the position of humble human that is, apparently, the most difficult.

For Michigan AG Dana Nessel, 52, her humbling human moment comes with what many believe is a totally unnecessary apology, which she issued after she admitted to getting wasted at the University of Michigan v. Michigan State University football game on Oct. 30, or as Nessel refers to it, "that fateful day," aka "tailgate-gate."

In an apology posted to Facebook on Wednesday, nearly two weeks after the "incident," Nessel outlined the day starting with attending a tailgate on an empty stomach (a total amateur move, by the way), where she proceeded to "eat" two Bloody Marys, which is, as she says, "practically a salad." And, honestly, she's not wrong.

"As it turned out, this was not a brilliant idea," Nessel wrote. "Also, I might be a terrible bartender. I proceeded to go to the game (which I’m told Michigan definitely won!) and started to feel ill. I laid low for a while, but my friends recommended that I leave so as to prevent me from vomiting on any of my constituents (polling consistently shows 'Roman showers' to be unpopular among most demographics)." Wait ... what the fuck is a "Roman shower" and why does it seem like a sex act?

Anyway, Nessel says people helped her up the stairs and grabbed a wheelchair so she wouldn't have to be seen stumbling through the parking lot. She said she had a designated driver, went home, and passed out on the couch, at which point her wife covered her in blankets, and provided water and Tylenol. And ... that's it. Just a typical day in the life of a typical, red-blooded, American alcohol drinker/football fan/attorney general.

"I am human," she wrote. "Sometimes I screw up. This was definitely one of those times. My apologies to the entire state of Michigan for this mishap, but especially that Michigan fan sitting behind me. Some things you can’t un-see."

As with anything involving anyone, people have some thoughts.

Most are confused as to why Nessel would apologize for something that most people have been guilty of doing.

"Would anyone have known about this if the AG didn’t put it out?" one Twitter user wrote.

"Thanks for reminding us we're human and even 'YOU' super woman that you are, are human, sorry this happened, wouldn't have happened if it were cannabis."

leave her alone!" another defends.

Even some out-of-state commenters popped in to applaud Nessel for her transparency.

"I live in Ohio but I must say it is so nice to hear the total honesty," a comment reads. "I wish we had more of that from others in office."

Of course, some people were critical of this error in a judgment, given Nessel's public office power.

"Dana Nessel is trying to make light of what happened, but getting so drunk she had to be wheeled out of the game is a seriously bad look for our state AG," The Detroit News' Ingrid Jacques wrote on Twitter.

"The issue isn't that she got embarrassingly drunk at our state’s most-watched public event, it's that she is completely erratic, irrational and lacks judgment," Tori Sachs, executive director of the conservative Michigan Freedom Fund, tweeted.

"If this was a Republican attorney general doing this — would he or she get the same pass?" One Twitter post reads. "No. Shameful."

And then there's, ugh, the others — mostly people who feel comfortable saying nasty things to women from underneath their bunkers of screens and low self-esteem, especially when it comes to women in power because, well, actually we don't know why this happens, but the comments under Nessel's apology post are a cesspool of good ol' fashioned women hatin' and pleas for her to resign/be fired/jailed.

"What a skank! Two bloody Marys my ass! Liar!" Alright.

One Facebook troll just decided it was the perfect time to declare that Nessel straight up "hates men!!!" because she's a lesbian.

"This doesn't happen with two drinks. You are a lying piece of shit."

"Why is it that big mouthed, nasty libs have ZERO self control," said someone who apparently doesn't have much self-control themselves. "If you can’t manage YOURSELF, what makes you think you can manage a state (which OBVIOUSLY this POS CANNOT)?"

"F*ck you, and your apology too," one person screams into the abyss. "Your corrupt ass deserves far worse. May that hangover be the best you feel this decade. Nothing but contempt for ya."

Nessel says she pledges to "never drink on an empty stomach" and she's sworn off all future Bloody Marys.

"Sorry to all the people who have supported me for letting you down," she wrote. "I will try to do better."

It's alright, Nessel. As one Facebook user wrote: "Nobody bled. Nobody died. This too shall pass."

At least she didn't light any couches on fire.