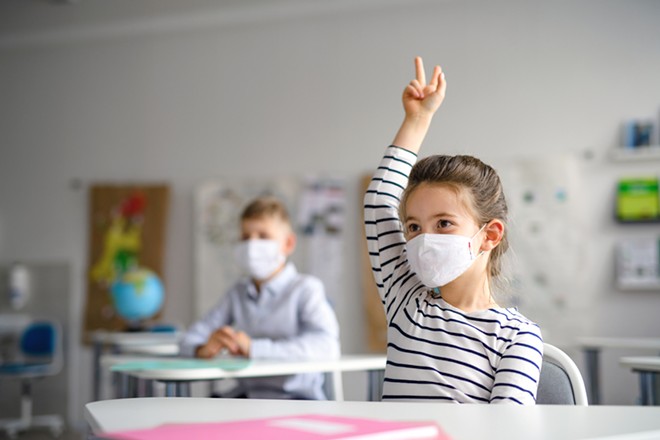 Meanwhile, in Wayne County, only 57% of residents ages 12 and older are vaccinated. That county saw 20 cases across three schools. It also has a mask mandate.

In Macomb County, two schools have the highest number of cases in a single school: 53 at Eisenhower High School in Shelby Township, and 45 at Stevenson High School in Sterling Heights.

That's not to say that Oakland County has zero cases connected to its schools, but they are scattered across nine schools The state considers ongoing outbreaks to be those that had already been identified in previous weeks but have had at least one new associated case reported to the local health department in the last 28 days. Outbreaks are removed from the list when there are no new confirmed or probable COVID-19 cases identified after 28 days have passed since the last known school exposure.

However, Macomb County officials say that the spike is due to a change in the way the state reports clusters. According to new rules that went into effect last week, a "K-12 school-associated cluster is defined as an educational institution that has been found by their local health department to have multiple cases comprising at least 10% of students, teachers, or staff, within a specified core group or at least three cases within a specified core group meeting criteria for a probable or confirmed school-associated COVID-19 case with symptom onset or positive test result within 14 days of each other, and no likely known epidemiologic link to a case outside of the school setting."

Macomb County Health Department Director/Health Officer Andrew Cox says it appears the other counties have not yet reported following the new rules.

"The numbers look oddly one-sided," Cox told the Macomb Daily. "It did not appear that it was happening statewide," adding, "Sometimes the data does paint the picture that Macomb County is lagging behind in response. I disagree with that."

Macomb County Executive Mark Hackel agreed. "Everyone is reporting differently than Macomb County," he told the paper. "Our schools are upset about how this is being played out."

Hackel said Macomb County has no plans to put a mask mandate in place.