Nothing is off limits for Bianca Del Rio, drag’s hurricane of hate 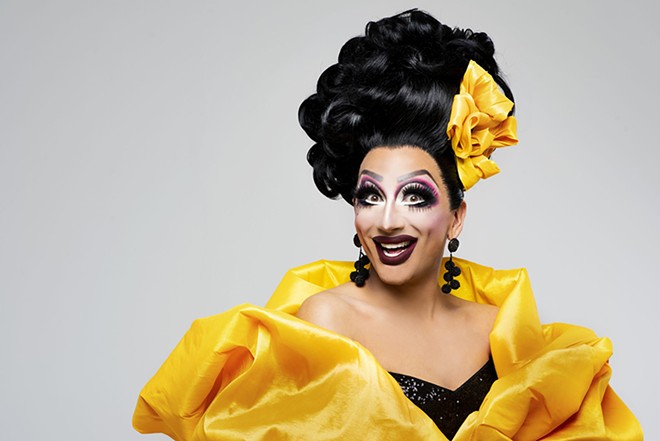 You don't need a cock to be cocky nor a cunt to be cunty, but when it comes to "the Joan Rivers of the drag world," Bianca Del Rio, well, she's got an asshole at both ends. And boy, is she full of shit.

Too harsh? Not for the acidic, dimple-cheeked, black and yellow-obsessed self-described "clown in a gown" and winner of Ru Paul's Drag Race season six who, at 39 years old, auditioned for the series with a truly psychotic impersonation of Dora (of Dora the Explorer fame) and who, during her season, coined the phrase "not today, Satan." This is all despite Reddit users calling for her cancellation over her politically incorrect, insult-packed stand-up sets.

Del Rio is, arguably, the most successful queen ever to emerge from the long-running — and in Del Rio's opinion, past its prime — Emmy Award-winning reality show competition. Not only does Del Rio have the most social media followers of any former contestant, but she's sold out career-defining venues like the Wembley Arena and Carnegie Hall with her massive comedy world tours, wrote an advice book called Blame It On Bianca Del Rio: The Expert On Nothing With An Opinion On Everything, starred in the musical and film adaptation Everybody's Talking About Jamie (and will reprise her role as Miss Haylock next year for U.S. performances), was named the "most powerful drag queen in America" by Vulture in 2019, launched a coconut oil-based makeup remover (and, unrelated, a vodka), and is one of four of Drag Race's winning queens who never had to lip-sync for her life.

Though the New Orleans native, née Roy Heylock, who has been performing in drag since 1996, is far from mysterious or sentimental, the bitch is back, feeling grateful, and looking as unhinged as ever.

"I'm grateful to be out of my house," Del Rio tells Metro Times via phone while signing stacks of glossy photos prior to a performance in New York City. "I'm grateful to see living people. ... I never thought I'd say I like people."

And she's not bluffing. Del Rio says she is one of the few drag queens from Drag Race that genuinely enjoys meet and greets with fans, which has been thwarted by COVID policies implemented on her "Unsanitized" world tour which requires fans to keep their distance.

"It's very hard now not to touch people because I'm one of those," she says. "I'm a hugger. I'm a toucher. Anybody who is interested in paying money to see me, I have to touch them and I feel the need to. So actually, this COVID stuff has been much harder for me, because I'm required to stay so far away. ... I prefer to touch people, unlike the other secondary drag queens who complain about it. I'm not one of them."

If there was more than meets the eye with the ever-caustic Del Rio, who offers unexpected moments of zen via her Instagram account where she tenderly tends to her wigs, applies her complicated makeup live before performances while answering fan questions, and blasting Liza Minelli (any respectful gay's hype music), she would never admit it. Though far from a one-trick pony (god, how we love watching her cut, sew, and model a dress under three minutes as much as we love watching her read new Drag Race contestants promo looks and talk shit about Lady Bunny), what Del Rio does best is not give a single flying fuck as to what anyone thinks. It's her calling card, her claim to fame, and is probably the source of whatever witchcraft or buffoonery that has made it so Del Rio looks younger now than she did when she was crowned in 2014.

A recent review of Del Rio's "Unsanitized" tour reads the unapologetic queen to filth and suggests that the performer's jokes are tasteless, outdated, lazy, and uninteresting. The review goes on to list all the innocent people (and, like, full-on populations of people) that Del Rio takes aim at, including: Asian people, lesbians, overweight people, people from Florida, Lizzo, RuPaul, Madonna, Cass Elliott, Karen Carpenter, and, yes, even Holocaust victims. Oh, and even RuPaul. When asked if there is anything off limits when it comes to her brand of comedy, which she regularly reduces to being nothing more than Don Rickles in a dress, she says abso-fucking-lutely not. If there is a line, she crosses it, turns around and snorts it. Del Rio can — and does — find humor in everything — but that doesn't mean you have to.

"It's risky," she says. "But I also think that if I'm thinking it then someone else is thinking it. It doesn't mean that everything is going to be a grand slam, it doesn't mean everybody's gonna like it. But that doesn't make it less funny. When someone says, 'That's not funny,' I have a huge problem with that. Because it should be, 'That's not funny to you.' I could think it's hysterical. But you know, it's like art. It's all subjective. And you know, you're going to have greatest hits and you're going to have b-side jokes. ... But I'm the biggest joke there is. I'm a 46-year-old man in a wig and heels on stage. I'm a fucking joke. So if you can't take that, what the fuck are you doing here?"

OK — but who dares serve the queen of mean a taste of her own medicine?

"Most recently, when Hurricane Ida was hitting New Orleans, Lady Bunny said she wished that I still lived there," Del Rio says.