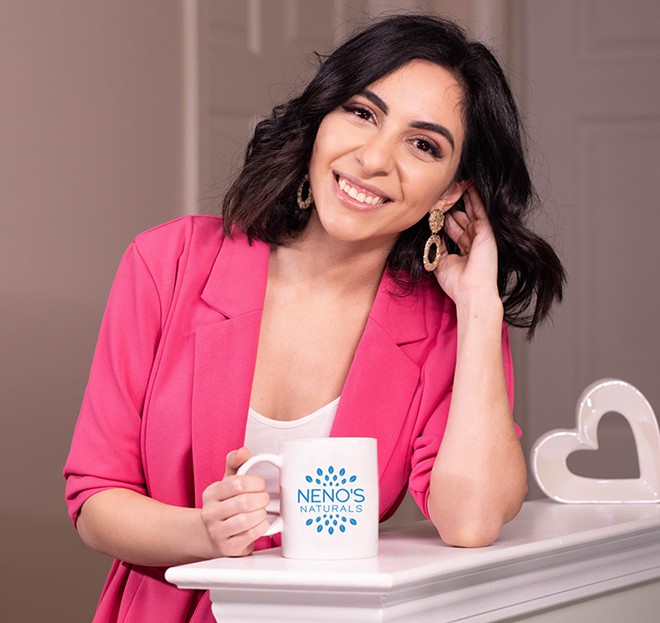 Narmin Jarrous, 25, is the chief development officer for the Michigan cannabis company Exclusive Brands. She has also been diagnosed with endometriosis since she was a teenager, a condition that causes tissue that normally covers the inside of the uterus to grow outside of it, which can be painful.

“It is just the most severe pain you can imagine,” she says. “And it's just all over and constant.” At 15, she was prescribed Vicodin. “I would tell them that it was not working, and they were just like, ‘Well, take more,’” she says.

Jarrous tells Metro Times that she didn’t start using cannabis to treat her pain until she started working at Exclusive Brands. (She had worked in a restaurant management company since she was in high school, where she was introduced to the people who would go on to launch what would become Michigan’s first licensed adult-use dispensary.) “Thankfully one day I started using CBD,” she says, referring to a cannabis product that doesn’t get you high but has other medicinal properties, including anti-inflammatory effects. Finally, she found a regimen that worked to manage her pain.

“That kind of opened up the door to the entire cannabis world,” she says. “I just started using cannabis and slowly got to drop almost all of my medications that I was on. It really made a massive difference in my life.”

However, earlier this year, Jarrous made a Metro Times headline when she revealed that the Ascension medical system denied her medication to treat her chronic pain because a blood test detected marijuana use.

“I consider that discrimination,” she says. “It’s an ableist policy, and I don't think that's fair.”

Jarrous tells Metro Times that she has since switched primary care doctors. “I'm lucky enough to have a really great insurance plan that I can just find a doctor and another health system,” she says. “But it’s much easier for me than it was than it could be for so many other people who might not have insurance. … And so that's why it was so important to me to speak out about that, because it affects so many patients who don't really may not have as much of a voice as I do.”

Since then, she also launched her own cannabis lifestyle and wellness brand, based on her experience using cannabis to treat chronic pain. Neno's Naturals launched last month, after two years in development. The brand sells CBD- and THC-derived products including vape cartridges, tinctures, patches, and edibles.

The brand name, she says, comes from a childhood nickname. “I don't even know where it came from, but like since I was a little kid, that's what everybody in my family calls me,” she says.

All of the products “were tested and tried and true by yours truly,” she says. “It was all really born out of my own need for pain and relief from my nausea.”

Neno’s is now available at all Exclusive Brands retail locations, and Jarrous says she’s working on getting the products into other stores. A portion of proceeds go to the Black and Brown Cannabis Guild, a nonprofit based out of Grand Rapids that advocates for social justice in the cannabis industry.

“I honestly had no idea the impact cannabis was going to have on my life,” Jarrous says. “I had no idea the things I'd be doing, and never in my wildest dreams would have thought I was going to be starting a cannabis line. It's just been blessing after blessing. It's been a ton of hard work and time, but honestly, I owe my life to cannabis. It makes such a difference in my day-to-day life and makes such an impact on how I can operate now on how I function. … I can do a lot of things that I couldn’t do before.”

More information is available at nenosnaturalscbd.com.