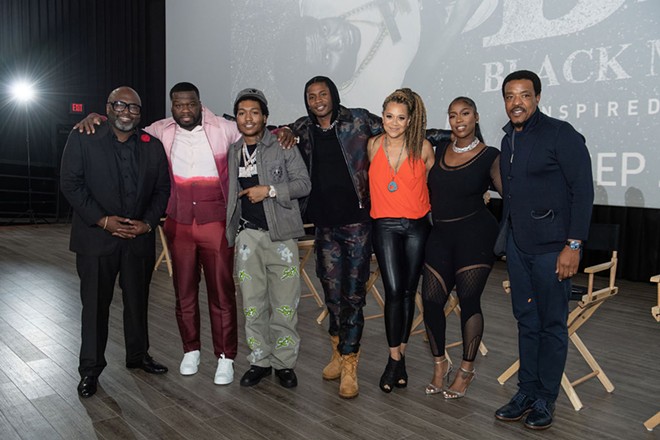 Based on true events, the show’s setting begins in the early 1980s when Detroit was more known for the production of crack cocaine than it was automobiles. Brothers Demetrius and Terry Flenory (portrayed by Lil Meech and Da'Vinchi) are aspiring entrepreneurs trying to plot their way to the top of Detroit's illegal narcotics trade. While the premise of the storyline can be misconstrued as another glossy cinematic tale of guns, drugs, and murder, the series weaves in themes of poverty, family, and racism from a Detroit perspective.

"I didn’t realize how much it would affect me to be here in Detroit," Hornsby told the audience as he fought back tears during the Q & A that followed the screening. "[The Flenory brothers] came from a loving God-fearing family. I think that's paramount, it's important to show America, to show our people that family does exist."

The event was full of fun insights as 50 Cent told the story of how it was decided that rapper Eminem would portray the famed Richard Wershe Jr., aka "White Boy Rick."

"When Randy brought it up it was random," 50 Cent said. "I was in the middle of prepping for episode 7 and he was like, ‘We need something big to happen, like let's get Eminem to play White Boy Rick.’ I was like, give me a minute let me see if I can get him out the house,” he said, eliciting chuckles.

The first episode also featured several Detroitisms — a block party highlighted by ghetto tech music and jitting dancers along with a character yelling out the proverbial Detroit greeting "What up doe!"

“As much as this is Meech and Terry’s, it's my story and it's Detroit’s story,” Huggins said.