Detroit mayoral candidate Anthony Adams says Duggan is afraid to debate him. The Duggan campaign says that's not the issue. 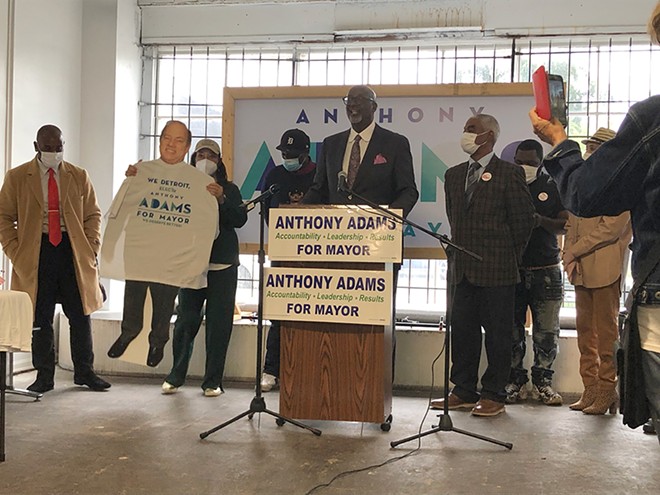 Lee DeVito
Detroit mayoral candidate Anthony Adams brings out a cardboard cutout of Mayor Mike Duggan, who has refused to debate him.

During a Thursday press conference at his Avenue of Fashion campaign office, Detroit mayoral candidate Anthony Adams gestures toward a cardboard cutout of Mayor Mike Duggan wearing an Adams campaign shirt to call out Duggan — and the media — for ignoring his campaign.

“For the last few days, my opponent [has] been dodging me assiduously because he’s afraid to debate. So we actually brought Duggan along here today,” Adams says sarcastically. “He came by the headquarters today and told me he really supported me, but he just can’t do it publicly. So we just gave him a shirt to let him know that, hey, we love you in spirit.”

Adams is running a longshot campaign to stop Duggan from winning a third term in November. In the August primary, Adams, a former Kilpatrick-era deputy mayor, came in a distant second, with some 7,000 or so votes to Duggan’s more than 50,000. Nevertheless, the Duggan campaign has refused to debate him, with campaign manager Alexis Wiley previously citing Adams’ “hateful and divisive rhetoric” as the reason why.

Adams tells the small crowd, which includes several reporters, of what he sees as the failures of the Duggan administration: the over-taxation of Detroit homeowners of $600 million, thousands of homes facing tax foreclosure, the city’s continued population decline, and preferential treatment to Duggan’s friends and corporations over the people of Detroit.

“It's time really to debate the serious issues impacting Detroit,” Adams says. “He throws out this trope about someone talking about hate speech, when in reality that’s a farce. If you look at my campaign issues, I am actually speaking to the issues impacting the quality of life of the citizens of the city of Detroit.”

He adds, “When he talks about hate, he doesn’t want to debate me and stand on the stage to make those allegations, because he is fearful of having his record carefully examined.”

During his speech, Adams lists off a number of damning figures that later appear to be inaccurate. “I’m not here to be a cheerleader for Mike Duggan. I’m here to critically question his policies that have led to more than 90,000 people leaving the city of Detroit,” he says, as one example. However, the 2020 U.S. Census found Detroit lost about 75,000 people in the past decade, a timeframe that predates the Duggan administration, and a number that Duggan believes is too high due to an undercount.

Adams appears to acknowledge the questionable veracity of his own figures.

He adds, “I'm calling you out. Stop being afraid, come to the table, man up, and let’s discuss what we need to discuss so that the citizens of Detroit understand fully how they’ve been impacted by these policies.”

When Metro Times asks if the Duggan campaign elaborated to his campaign on what it meant by “hate,” Adams says it did not.

“No, he did not do that, because he can't do it,” Adams says, adding, “What he considered to be hate is the fact that I’m talking the truth. And when truth becomes hate, then we have a problem.”

He adds, “They’ve never communicated with me, but I don’t expect them to. But what I do expect is for them to respect the democratic processes in our own community, which requires that a debate between two candidates be had.”

Adams says he believes that labeling his campaign as “hateful” is a “racist trope,” although it should be pointed out that Wiley is also Black.

“We understand that the history of racism in America is that they always try to paint a Black man as an angry Black man,” he says.

He also calls the media out for not pressing Duggan on the issue.

“The first question from the media should have been, ‘Please tell us what you mean by hate, please show us what you’re talking about,’” he says.

It’s a fair point. While Adams speaks, we fire off an email to Wiley requesting her to elaborate.

Still, even while discussing hate, Adams can’t seem to resist taking a shot at Duggan’s appearance.

“He is afraid to stand on the stage with me, in part, because of the size differential, the height, the intellect differential,” Adams says, eliciting a few hoots from the crowd.

Adams says he won’t continue to press for a debate, though he claims that both campaigns are in talks with a local television station to hold one.

When we return to our office, we see Wiley has responded to our email.

“Are you seriously asking me this considering I’m being told by reporters that he said at a press conference that the Mayor should get out from ‘behind his campaign manager’s skirt?’” she writes. “Seriously?”

When we reply that we didn’t think that answered our question, Wiley calls us back.

“The fact that he called a press conference, and at his own press conference, referenced my skirt, as if as a female campaign manager, somehow he had to reference my sex, says a lot about what kind of narrative he wants to present to the city,” Wiley says. “And that's something that the mayor does not want to provide a platform for.”

When pressed for an example of hate from the Adams campaign, Wiley references a tweet in which Adams inaccurately said that the Land Bank does not sell homes to Black people.

“That's a flat-out lie, 70% of the people who are buying from the Land Bank are Black Detroiters,” she says. “That kind of rhetoric is something the mayor doesn't want to give a platform to.”

Still, being inaccurate or even hyperbolic isn’t exactly hate, or even, unfortunately, anything really all that unusual in politics.

We ask Wiley if the Duggan campaign would consider something similar to the rules of the final 2020 presidential debate, where the candidates’ mics would be muted when it’s not their turn to speak to ensure a civil debate.

She also denies the Duggan campaign is in talks with a TV station for a potential debate.