Years after 9/11 and Pulse, Arab Americans in metro Detroit continue to challenge stereotypes 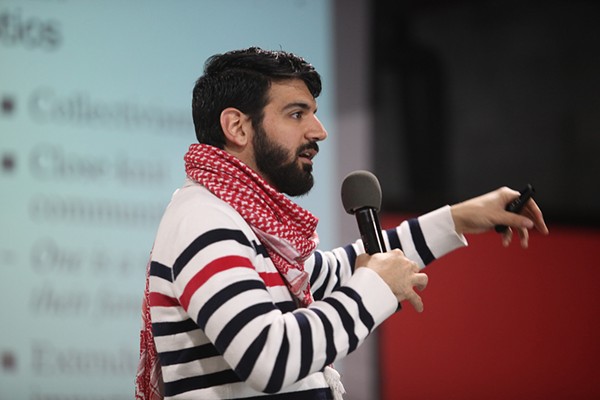 "I always used to tell people I'm Sicilian," says Serio. "Because anytime I would say I'm Lebanese or Arab, I would either get really weird looks or people would have no idea what I was talking about."

Serio clears his throat. "Then 9/11 happened and even then, I maybe tried to divorce myself from my Arab identity," he says. "The world was so focused on that area and I decided to then also understand why these labels were being put on me and the negative things being said."

Serio has spent the last twelve years working at the Arab American National Museum on dispelling myths about Arab Americans. Serio is head of the education department and public programmer, where he helps visitors explore the same questions he began to ask in the early 2000s.

"It was kind of a journey of self-exploration and I started talking to my grandparents from my Lebanese side to ask, 'What does it mean to be Lebanese or Arab?'" he says.

Since 2005, the museum has advanced progressive narratives that challenge the assumption that Arab Americans are a monolith with a universal singular identity that share "conservative" values.

One of the museum's most sobering exhibits is located within the "Living in America" section, a wall-to-wall visual montage of hundreds of stereotypical depictions of Arabs and Muslims in film, media, and pop culture.

The 2006 documentary film adaption of his book, Reel Bad Arabs: How Hollywood Vilifies A People, opens with Shaheen's sobering narration: "Arabs are the most maligned group in the history of Hollywood."

Shaheed watched a thousand films from the beginning of Hollywood cinema to the 2000s.

"Out of one thousand films that portrayed Arab Americans, only 12 were positive portrayals and fifty were neutral," Serio says. "This leaves a massive amount of films that portray Arabs in a very negative and stereotypical way."

Five years ago, the nation was forever shaken by the Pulse nightclub mass shooting committed by an Afghani American Muslim man. In the deadliest incident of violence against the LGBTQ community in the United States, the tragic massacre of 49 people ended with the perpetrator being shot by local police.

While the nation struggled to cope and heal, President Donald Trump and other politicians chose the moment to leverage anti-Muslim rhetoric and justification for the call of a ban Muslims from entering the country.

A day after the shooting, Trump gave a speech on national security saying, "Remember this, radical Islam is anti-women, anti-gay, and anti-American values."

Back in Dearborn, a local mosque called the Islamic House of Wisdom held a candlelight vigil for the victims of Orlando and others killed by terrorism.

During the event, a prayer led by the mosque's religious leader was interrupted by a member of the LGBTQ Muslim community. They felt the event was shamefully sidestepping the queer community in the focus of the Muslim-centered space.

It's also worth noting there has been heavy speculation concerning the Pulse shooter's possible inner turmoil with sexuality and any self-hatred that played a role in the decision to follow through with violence and self-destruction.

Days after the shooting, The Arab American News published an article detailing the seldom-heard narratives from local gay Arabs and the trauma they experienced before and after the shooting. Some individuals faced a reinvigorated sense of homophobia from their families, but others were comforted by their Muslim relatives who openly accept them.

Serio says the news coverage from other national outlets did not capture that same nuance.

"The problem is, stereotypes about the Arab community in general tend to leak into other areas such as this one — 'super religious', 'terrorists', whatever the case," Serio says of the emerging news narrative of homophobia in Muslim communities. "It's ten times more intense than other communities that are already stigmatized."

However, The Arab American News piece did not shy away from detailing the rift within the community. It challenged broad misconceptions on the perceived incompatibility of the identities gay and Arab or Muslim by delineating points of solidarity.

For example, after the U.S. Supreme Court affirmed same-sex marriage, Arab and Muslim leaders and scholars called for SWANA (South West Asian/North African) and LGBTQIA communities to stand together against marginalization.

Years after the tragic nightclub shooting, Serio laments that news narratives that focus on Arab and Muslim homophobia still overshadow stories of acceptance and celebration of the queer community.

"It's so frustrating and unfortunate," Serio says. "With being queer in the Black of Latinx community, there are various reactions found, just like the Arab community. I know a lot of white folks who have had major issues coming out. We can find those who were even killed for being queer."

The once largely white and Polish Catholic city of Hamtramck did not pass a resolution to fly the LGBTQ Pride Flag until this year. Now, the city is the first in the U.S. to have a city council with a Muslim majority, and two of the three councilmembers who helped break a tie in favor of the Pride Flag are Muslim Americans.

Serio says the Arab American National Museum is trying to highlight that celebration of queer identity within the community.

"Our goal is to tell the full story of Arab Americans," says Serio. "That's why film festivals are a really great example because we get to include as many voices as possible... which includes the queer Arab community."

When asked about the lack of inclusion on screen of people who are both queer and Muslim, he said there are many film projects that do exist, but have not quite crossed over into the mainstream.

During the Muslim holy month of Ramadan last April, the museum streamed the groundbreaking film Breaking Fast by Dearborn native Mike Mossalem. It's a romantic comedy about the [queer] relationship between Mo, a practicing Muslim, and "All-American" Kal, gradually connecting to each other against the backdrop of Ramadan iftar family dinners in West Hollywood.

In June, the AFMI also published a list of more than 50 queer Arab films to watch during pride month, including narratives, documentaries, and shorts films.

"It's important to hold space for different events and programs and not wait for approval from the general community," says Serio, who also serves on the board of Macomb County Pride.

"At the same time, I feel like things are changing, especially with our generation and younger generations," he adds.

Serio says the recent screening of Breaking Fast is just one example of how a film can avoid one-note characters that would reinforce queer stereotypes.

"I heard from a lot of people who are queer who said 'thank you, I feel heard and seen," he says. "It's important to expose more diverse queer stories."

This story was made possible through a partnership with the Race and Justice Reporting Initiative and the Detroit Equity Action Lab at the Damon J. Keith Center for Civil Rights.