Courtesy photo
The Boblo Boats, sisters SS Columbia and Ste. Claire, are the subject of a new documentary film.

The RMS Titanic. The MS Estonia. The SS Edmund Fitzgerald. Boats that inspire songs, films, and make it into history books are, most often, the ones that meet their untimely demise, resting at the bottom of their respective seas, leaving people, dreams, destinations, and fine china in their wake. The other ships that make headlines are usually the ones that cruise the Caribbean with their all-you-can-eat buffets, which are usually the inevitable source of gastrointestinal outbreaks that plague their unsuspecting passengers.

Then there are boats that spent the majority of their seafaring years bringing joy to the masses, serving as a backdrop to precious memories, quietly historic moments, and so much dancing only to be docked for what feels like a lifetime, rusting, waiting, dreaming of their next voyage.

If you listen closely, these boats have a story to tell, and they're eager to tell it. In the case of Detroit's beloved ferries to the shuttered Boblo Island Amusement Park — sisters SS Columbia and Ste. Claire — it's more of a ferry tale without an ending.

Filmmaker Aaron Schillinger doesn't know why he set out to make a documentary about boats. He's not, like, a boat guy in the way that some guys identify as boat guys, and in order to dedicate six years to making a movie about the oldest surviving passenger steamboats in the country (both of which are out of commission, though in varying states of decommission), one should be a boat guy. For 38-year-old Schillinger, the journey of his debut feature film Boblo Boats: A Detroit Ferry Tale started where all good stories start: a boat psychic.

"I sometimes wonder that, too," Schillinger says when asked why he felt compelled to tell this story. "I mean, I spent over six years trapped in Boblo Land. And it's kind of insane because I live in Ferndale now, but I'm originally from Virginia, and I lived in New York City for 15 years.” It was in NYC that Schillinger met the executive director of an organization whose goal was to resurrect the Columbia, the second group to attempt to do so following a failed 15-year effort by the Steamer Columbia Foundation. “And she told me she knew a woman who could psychically communicate with a steamboat,” he says. “So, I was like, I gotta meet this lady.”

OK, but first — what in the hull are the Boblo boats and what is Boblo Island?

For Detroiters born after 1990, Boblo Island (actually named “Bois Blanc,” but like so many words around here, mispronounced by non-French speaking folks) and the ferry steamboats that transported people to and from the Ontario, Canada, attraction may not ring any bells aside from older family members waxing nostalgic, or through songs like 2018's "Boblo Boat" by Detroit rapper Royce da 5'9'' featuring J. Cole (a song Schillinger tried to license for the film but was too pricey). On the track, Royce encapsulates the Boblo experience, referring to the island as "the Black amusement park" and describes the parties on the way to the island as being the "livest." For those who lived it firsthand, though, Boblo Island was an accessible and affordable paradise right in Detroit's backyard.

Opened in 1898, Boblo Island was one of North America's earliest amusement parks that, for nearly 95 years, was the place to be. The ferries were tasked with transporting thousands of people to and from the 2.5 mile-long, half-mile-wide island where people could enjoy attractions like what is believed to be the second-largest dance hall in the world, flying swings, roller coasters, bumper boats, a zoo, a ferris wheel, a log ride, a pirate ship, and, according to an incredible 1992 promotional video aimed at "teens" released just a year before the amusement park shuttered, high divers, magic shows, antique car rides, and views from the Sky Tower (one of the only remaining structures, though no longer functional, and like the rest of the theme park, reclaimed by nature on an island now partially occupied by McMansions, a restaurant, and golf-carting residents).

Alright, back to Gloria Davis, the late, great boat psychic. 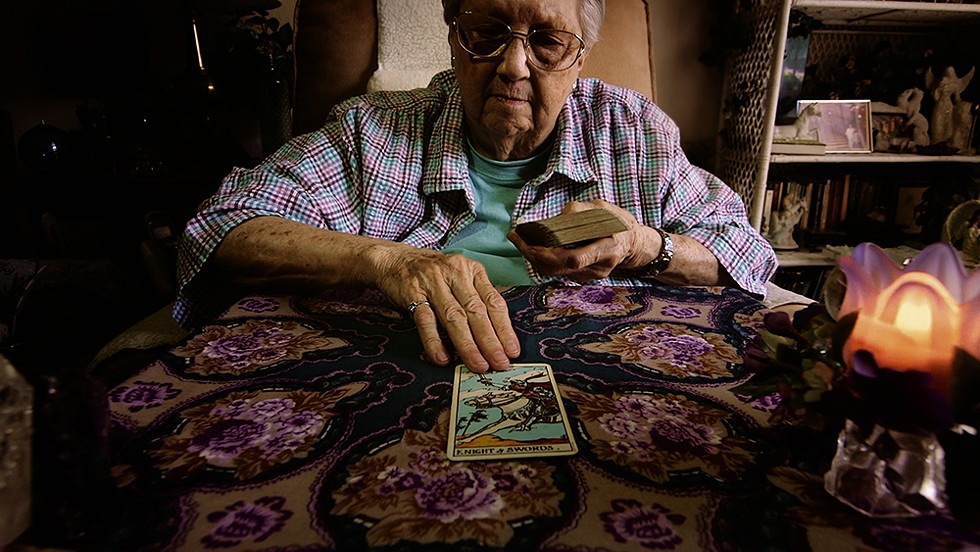 "So I called Gloria and she just charmed the pants off me, I mean, not literally," Schillinger says. "I was a little skeptical of whether she could talk to the boat or not, but that doesn't really matter because she feels it herself."

It was through Gloria that Schillinger learned of the dedicated restoration teams who were working against all odds to salvage both steamboats, both of which, at the time of Schillinger's introduction, had seen better days.

"My first thought was like, 'why don't you guys build a new boat?'” he says. “But then I started to understand how much it meant to these people. And it was almost like this last vestige of something that for Detroiters represents this bygone era, or better times, and people were trying to hold on to that."

Hold on they did — and have continued to do — not unlike stubborn zebra mussels clinging to the hull.

Though Gloria was Schillinger's warm and eccentric introduction to Boblo Land, as he refers to it, she was also the first of several living, breathing characters who are Christopher Guest-ian in their quirks but are also larger than life in their shared passion of all things Boblo. The documentary, despite its title being about boats, is more about the people who loved them.

There's Dr. Ron Kattoo, an ER surgeon, dedicated father, and husband who has overcome stage 4 bladder cancer and a brain tumor and who is the majority owner of Ste. Claire — and deserves his own reality show. Before Kattoo and his crew got their hands on the boat, it was previously owned by John Belko and his ex-wife Diane Evon, who, for nostalgia's sake and with the goal of opening a haunted "Nautical Nightmare” attraction, bought the 197-foot-long, 96-year-old boat for $20,000 on Sept. 11, 2001. Three months into owning it, they sunk a whopping $100,000 to repair the hull and, by the end of their ownership — and their dissolved marriage and subsequent nasty divorce — the pair had spent more than half a million dollars on restoration. (It is implied that the boat and the financial commitment to fixing it played a role in their split.) According to Schillinger, Belko had gotten the closest to restoring the boat to her original glory, though still really far from fully restored. Belko became obsessed with the boat, per Evon's commentary in the film, and ended up losing the Ste. Claire in the divorce. Evon, who was filmed on a couch covered in animal pelts, was relieved when Kattoo offered to buy the boat.