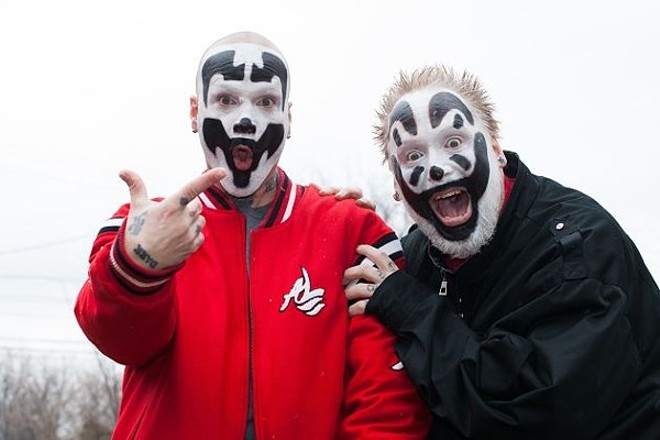 Courtesy of Psychopathic Records.
If there ever was a time to let out a somber "Whoop! Whoop!" now would be it.

During last weekend's Gathering of the Juggalos, the annual Psychopathic Records-hosted event in Ohio dubbed “the biggest family reunion on the planet," Insane Clown Posse's Violent J revealed that he is suffering from a serious heart condition which has reshaped ICP's future, Loudwire reports.

Violent J, 49, spoke during a panel discussion at the Gathering alongside bandmate Shaggy 2 Dope where he shared his Atrial Fibrillation diagnosis. Most commonly referred to as AFib, the condition is a type of arrhythmia that causes one or both of the heart's chambers to beat irregularly and can be the result of prolonged high blood pressure or previous heart attacks.

The rapper realized something was wrong when he found himself winded when walking short distances. Following a visit to the hospital for an ultrasound, Violent J was contacted by doctors promptly the next morning who then urged him to come back to discuss the results.

"They took me in the back and shit, and basically they just came out and told me I have heart failure," he told the Gathering crowd. "That scared the shit out of me."

Since the diagnosis, Violent J has endured treatments, one such procedure found doctors burning off scar tissue caused by his heart's erratic beating. However, doctors have informed him that symptoms could return without notice. Violent J says it's "embarrassing" and "very not-cool" to have to take a step back from his normal life, but he understands that this is what is best for his health and for ICP, which will embark on a farewell world tour next year.

The farewell tour marks a change of pace for the rappers and will not impact recording new music or even performing one-off events like the gathering or Detroit's Hallowicked, a fan favorite event. Following the farewell tour, Violent J says he and Shaggy 2 Dope will still likely perform a show a month but long gone are the days of weeks of touring without pause. The farewell tour will find ICP doing 3-4 shows a week.


"There’s a lot of people that live long lives with fucking AFib,” Violent J said, adding "There comes a time in everybody’s life where you have to take your first step backward. And yeah, I’m 49, I’m taking my step back sooner than a lot of people, but the point is, each and every single person alive — if they’re lucky — will one day have to take that step back. Because nobody escapes the trials and tribulations of being a human."