Under 70% of Michigan kids have all their recommended vaccinations, as rates dipped during pandemic 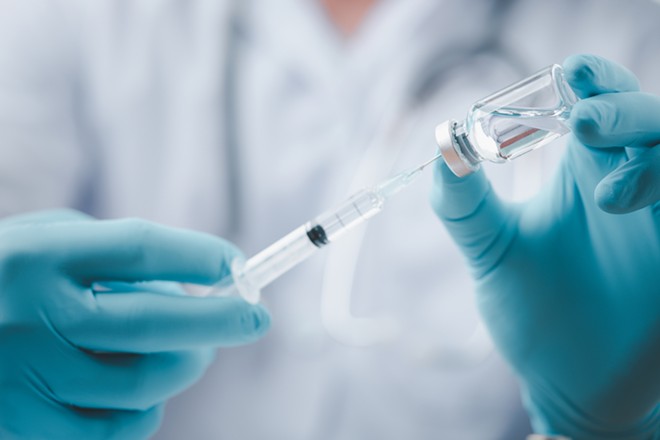 Shutterstock
A doctor filling a syringe with a vaccine.

Following a decline in Michigan’s childhood vaccination rates during the pandemic and with less than half of eligible students vaccinated against COVID-19, physicians and educators are urging parents to protect their children before the school year begins against highly contagious diseases from COVID-19 to measles and whooping cough.


“During the COVID-19 pandemic, Michigan saw an alarming drop in childhood vaccinations that are recommended by the [U.S. Centers for Disease Control and Prevention] and the American Academy of Family Physicians,” Dr. Mark Hamed, the president of the Michigan Academy of Family Physicians and the medical director of the departments of emergency medicine and hospital medicine at the McKenzie Health System in Sandusky, said during a Monday virtual press conference. “This has been attributed to parents avoiding taking their children to the doctors’ offices in person for routine well child visits and physicals during the pandemic. However, now it’s high time to get kids caught up on vaccines.”

Less than 70% of Michigan children are currently up to date on their recommended vaccinations, doctors and educators said at the press conference held by the Michigan Academy of Family Physicians and Michigan Elementary and Middle School Principals Association.

In six Michigan counties and the city of Detroit, vaccination rates for children ages 19 to 36 months have dropped below 60%, according to the Michigan State Medical Society. Typically, public health experts advocate for a 70% vaccination rate, at minimum, to reach herd immunity in order to protect the public from such diseases as measles, Hepatitis A and B, mumps and whooping cough.

Oscoda County in northern Michigan has the lowest vaccination rate in the state, with 45.2%, of children ages 19 to 36 months being vaccinated, and Detroit has the second lowest at 49%, MCIR reported. Other counties that fall below 60% are: Gladwin, Iron, Lake, Clare, and Otsego.

These dips are deeply concerning, physicians at the press conference said, noting that vaccines provide critical protection against highly contagious diseases that can be fatal or cause life-long health problems.

“Michigan has had its first case of Haemophilus influenzae b meningitis in an unvaccinated child this year; this has been unheard of for decades,” said Dr. Tina Tanner, the primary care medical director for Mercy Health Physicians Partners in Muskegon and North Ottawa County. “Michigan has in the past five years experienced outbreaks of measles and whooping cough, and I’ve seen both in my practice in West Michigan. These diseases are completely preventable with vaccines.”

“It appears our youngest learners are less susceptible to the COVID-19 virus, but we continue to be concerned that some portion of the age group 12 and older are not getting vaccinated,” Paul Liabenow, executive director of the Michigan Elementary and Middle School Principals Association, said during Monday’s press conference.

As doctors and educators fight to increase vaccinations in the state, Republican legislators have introduced legislation, Senate Bill 457, to prohibit the DHHS from requiring minors to receive a COVID-19 vaccination under emergency public health orders. The legislation also would ban local public health departments from issuing the same type of order.

Some Republican lawmakers have long challenged vaccine mandates for school children and have advocated for increasing parents’ access to vaccine waivers.

The number of Michigan vaccine waivers, which allow children to attend school without receiving the required vaccinations based on religious, philosophical or medical reasons, decreased slightly in 2019 compared to the year before, dropping from 3.8% of students to 3.6%, according to the DHHS. The overall waiver rate in 2019 was 25% less than in 2014, with almost 6,000 fewer waivers granted. That drop followed a state administrative rule change that required parents seeking waivers to attend an educational session about vaccine-preventable diseases and vaccinations.

Those attending the press conference Monday said they would not back strengthening vaccine mandates in the state but instead encourage parents and guardians to communicate with trusted family doctors about the importance of vaccines.

As family doctors work with parents and children preparing to be vaccinated as in-person learning nears during the next school year, there has been a slight backlog of patients because individuals were concerned to see their doctors during the pandemic, Tanner said.

“There is a little bit of a struggle to get into some offices,” said Tanner, who urged individuals to set up their vaccine appointments as soon as possible.

Still, that backlog should not deter people from accessing needed vaccines, Tanner said, and the physicians and educators at Monday’s press conference emphasized that COVID-19 further shone a light on the importance of preventing contagious diseases from spreading in schools, and the general public.

“We learned a lot over the last 16 months during the pandemic, and we saw firsthand how dangerous the spread of disease can be in schools, families and communities,” Liabenow said. “It’s urgent to catch students up on vaccinations as we plan for a safe return to in-person school in just a month or so.”


Originally published July 20, 2021 by Michigan Advance. It is republished here with permission.