Phones belonging to top state health department officials were found with no text messages from the period Flint switched its drinking water, and environmental officials’ phones were allegedly ‘wiped clean’

By Jordan Chariton and Jenn Dize 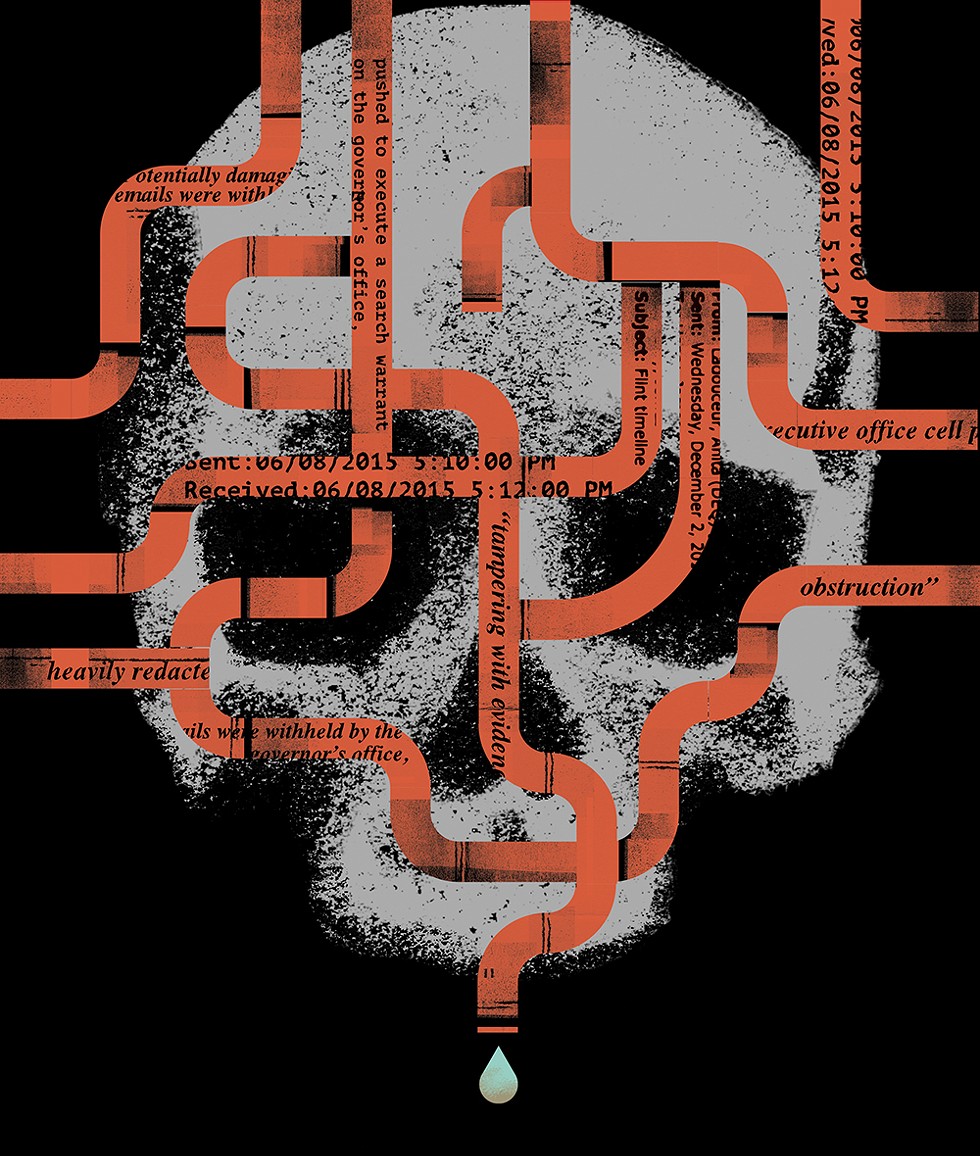 This story was produced in a partnership between The Intercept and Detroit Metro Times.

In October 2015, then-Michigan Governor Rick Snyder finally announced that Flint's water was contaminated with dangerous lead levels. That public admission had come after more than a year of pleading from the city's residents to examine the situation. The city, Snyder promised, would immediately stop using water from the Flint River, which residents had been drinking for 18 months.

The public announcement raised as many questions as it answered, and kick-started a years-long investigation into how the decision that delivered the toxic water to Flint had been made in the first place, how many people were sickened and killed as a result, and when senior government officials first learned of the deadly consequences.

Along the way, however, investigators who were part of a three-year Flint water investigation beginning in 2016 kept drilling dry holes.

Dr. Eden Wells became Michigan's chief medical executive in May 2015. By then, the Michigan Department of Health & Human Services had been aware for at least seven months about a significant increase in the deadly waterborne Legionnaires' Disease throughout Flint.

But when investigators obtained access to Wells's phone, they discovered something unusual. "For Dr. Wells' phone the earliest message is from November 12, 2015," then-Flint special prosecutor Todd Flood wrote in a subpoena petition obtained by The Intercept. During the key period that investigators were probing, no messages were found. In 2018, a judge ruled Wells would have to stand trial for involuntary manslaughter, along with obstruction of justice, over her role in the water crisis. (Those charges were dropped by current Attorney General Dana Nessel in 2019; in January 2021, Nessel's Flint water prosecutors recharged Wells with involuntary manslaughter, misconduct in office, and neglect of duty.)

Other searches turned up similar results. The phone of Tim Becker, MDHHS's chief deputy director, had no messages on it prior to April 14 2016, two months before he left his role with MDHHS, the subpoena reported. Becker testified to having first asked questions about Flint's Legionella outbreak in January 2015.

Patricia McKane, an epidemiologist with MDHHS who testified that she was pressured to lie by Dr. Wells about elevated blood-lead levels in Flint's children, was found to have only had four text messages on her phone from 2015 and seven total messages. (Wells denied the allegation.) Fellow MDHHS epidemiologist Sarah Lyon-Callo, who Dr. Wells copied in an email responding to accusations by a Wayne State University professor that she was trying to conceal the link between the Flint River switch and the Legionella outbreak, had no messages prior to June 2016.

"Again, for some strange reason the earliest text message in time on her device begins June 20, 2016," reads the subpoena petition. Wesley Priem, manager of the MDHHS's Lead and Healthy Homes program, who emailed colleagues erroneously challenging the findings of high blood-lead levels in Flint children discovered by Flint pediatrician Dr. Mona Hanna-Attisha, had just one text message found on his state-issued phone from Jan. 22, 2016.

The missing phone messages from top MDHHS officials were a major red flag to investigators and an obvious impediment to those investigating who knew what and when. Despite department epidemiologists hypothesizing in October 2014 that the source of Flint's deadly Legionnaires' Disease outbreak was the switch to the Flint River six months earlier, Flint residents weren't informed of the deadly outbreak until 16 months later when Governor Snyder announced it in January 2016. PBS found a 43 percent increase in pneumonia deaths in Flint during the 18 months the city received drinking water from the Flint River — and also found that scientists believed some of those 115 pneumonia deaths could be attributed to Legionnaires' Disease, which has similar symptoms to pneumonia and is often misdiagnosed as such.

Investigators also discovered that phone data belonging to a key official close to Governor Snyder was completely erased shortly before the Flint criminal investigation was launched.

Sara Wurfel, Governor Snyder's press secretary during the water crisis in 2014 through fall 2015, told Flood her phone was "wiped" when she left her job at the end of November 2015 — after a civil suit was filed against the Snyder administration and a month before the launch of the Flint water criminal investigation.

"Do you have text messages from 2015 currently [on your phone]?" Flood asked Wurfel in a confidential interview obtained by The Intercept.

"No. So when I left the Governor's office, everything got wiped. I mean, when – I turned in my phone, it got wiped," Wurfel told Flood. Wurfel, who kept her state cell number when she left her government job, said she didn't recall if she had been asked to hand in her phone at any other time in 2015 prior to leaving her job in November. She also said she didn't think she had used iCloud to back up her phone data.

When asked for comment by The Intercept, Wurfel said, "Not sure what you're referring to — please share if there's a specific document, item, etc." When provided with what she told the special prosecutor regarding her phone being wiped when she left her state role, she did not reply.

"That is not standard," a former Department of Technology, Management and Budget [DTMB] official who worked for the state during this period and was involved with state data preservation told The Intercept about Wurfel's phone being wiped upon leaving her role as Snyder's press secretary. "There are retention schedules that every agency, including the governor's office, is supposed to adhere to," said the ex-official, adding that for the governor's office, data is supposed to be retained for at least a year after an official leaves. But with potential litigation looming, "it should've been held indefinitely," the official concluded. The source spoke only on the condition of anonymity for fear of professional retaliation.

As the water crisis intensified, criminal prosecutors and investigators would discover that messages were missing from before October 2015 on phones belonging to top MDHHS officials.

Lonnie Scott, the executive director of the progressive organization Progress Michigan, told The Intercept "it's not entirely surprising to hear" that top officials' phones were altered or wiped completely. Scott had seen something similar happen before in 2014 when his organization had submitted Freedom of Information Act (FOIA) requests for state health director Jim Haveman's communications with Snyder's chief of staff. After Haveman resigned from his job in October 2014, Progress Michigan discovered that his emails were deleted upon his resignation from his role.

"We've said all along that we believe that there was a cover-up and that the governor knew more information than he was putting out publicly," Scott said.

The Intercept has also learned that former prosecutors were told that phones belonging to officials with the Michigan Department of Environmental Quality (MDEQ) might have been erased.

Soon after Snyder's October 2015 announcement about Flint's toxic water, the heat intensified around the governor as calls for a federal investigation into the water crisis mounted along with heightened media attention. As the water crisis intensified, and a criminal investigation was launched, criminal prosecutors and investigators would discover that messages were missing from before October 2015 on phones belonging to top MDHHS officials.

The question of what Snyder knew and when, and what role he and his administration played in stymying investigations into the cause and cover-up of the outbreak, is of increasing importance as the former governor now faces trial in connection with his handling of Flint's water crisis.

Wells's lawyer did not respond to The Intercept's request for comment. Neither did Becker, McKane, Lyon-Callo, or Priem. A spokesperson for Governor Snyder declined to comment.

On the missing phone messages from top MDHHS officials, a department spokesperson told The Intercept, "The department does not care to comment other than to say that the department always cooperates with the Attorney General's office in providing anything that office has asked for during its Flint water investigation."