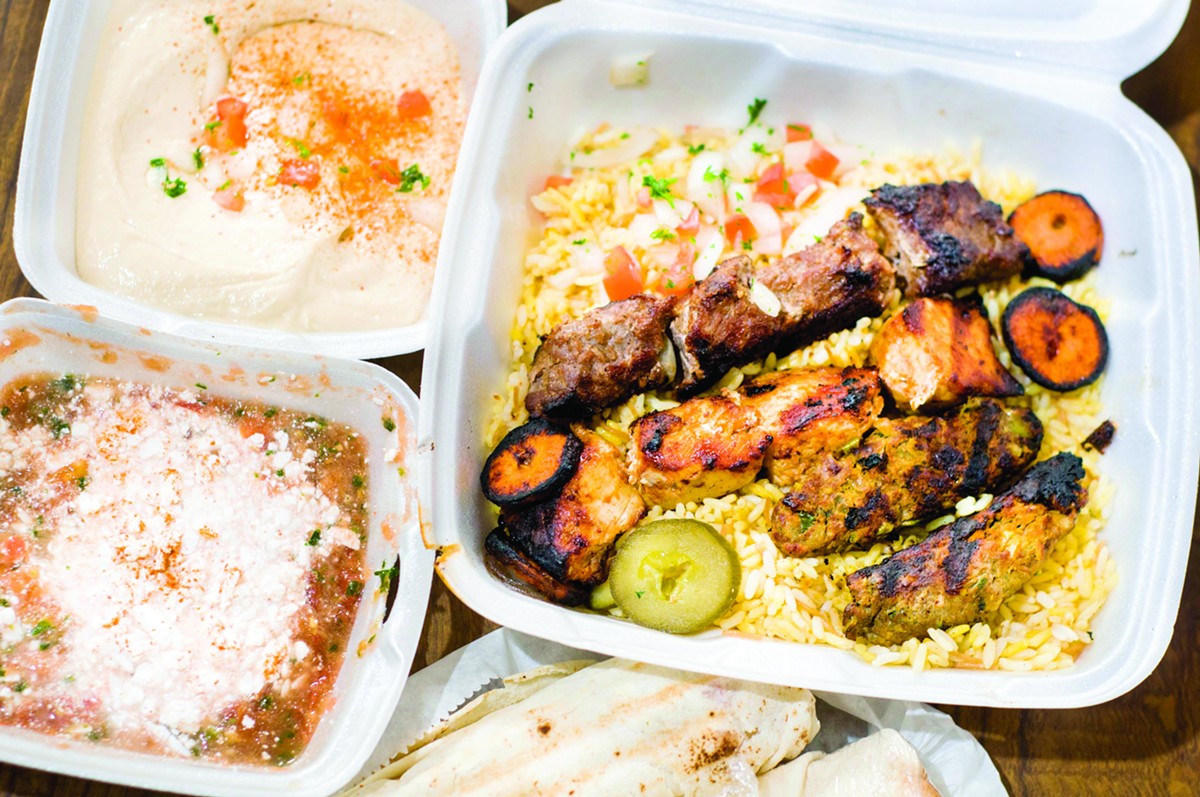 Hamtramck has already cemented its status as the state’s best sandwich town. There’s just no competing with a roster of dishes like Boostan Cafe’s flawless shat shawish, a spicy Mexican-Arabic mash-up of shawarma, hot sauce, ranch, and pickled jalapeños; the fiery chicken 65 “burger” at Ali’s Pizza; the shawarmas at Hello Shawarma that are the best of a classic, with its mayo-garlic-herb sauce; or any of the local sandwich purveyors' cream chop pitas, which should be a part of all metro Detroit fried chicken discussions.

Add to the exalted mix Tahama’s Yemeni kebab. The newest Hamtramck sandwich shop packs its little kebabs of minced lamb full of aromatic leeks and parsley. They’re bright, and are made slightly smoky and charred around the edges from a stint above a charcoal grill.

Tahama then rolls the meat into a pita with what’s labeled as “salad” but is a mix of tomato, onion, and parsley, and it’s finished off with sahawik, a fresh Yemeni hot sauce of tomato, garlic, and cilantro. The sandwich is an instant classic.

Tahama opened last fall after its partly finished storefront with a few tables for indoor dining teased what was to come for many months, and it’s not only a sandwich shop — one can get the Yemeni kebab as part of a trio of meats with cumin-heavy beef shawarma and nubs of chicken Tawook alive with what’s likely lemon, garlic, oregano, and paprika, all of which arrives on a bed of puffy, yellow saffron rice. It’s adorned with discs of charred orange carrot, flavorful Arabic pickles, and a tomato, onion, and parsley garnish.

In many cases, Tahama’s menu is this type of a pick-your-vessel exercise.

The beef shawarma, for example, comes in the trio, or rolled in a pita with tomato, onion, parsley, and tahini, but it can also be packed into a sub sandwich. When I tried to order the steak sub, owner Mohammed stopped me and said I needed to order the beef shawarma sub, which is the same thing except the steak is swapped out with shawarma. He places it between two pieces of crusty sesame-seed buns with grilled onions and peppers, as well as tomatoes, lettuce, mayo, and pepper-jack cheese. Mohammed is right — beef shawarma is better than steak on a steak sub. This one isn’t on the menu yet, so you gotta ask for it.

The chicken shawarma also comes in pita or sub form. In the pita, it’s rolled with tomato, onion, parsley, and bathed in a ranch-garlic sauce that’ll drip out if you’re not careful, while the chicken sub comes with tomatoes, onions, lettuce, pepper-jack cheese, and a garlic sauce-ranch sauce. Either route works just fine.

Tahama’s hummus is run-of-the-mill, and the more interesting side is the sahawik with jubn, which Mohammed described as “like a Mexican dip” but one that’s eaten with pita. Jubn is a salty white, soft cheese, but the dish is not as creamy as what might be the standard idea of a Mexican cheese dip because the cheese breaks into crumbles instead of forming a creamy texture with the salsa-esque sahawik. But Mohammed isn’t wrong — there’s definitely a Mexican vibe here. To get a sense, imagine what would happen if one added cream cheese to fresh, thick salsa. It’s worth checking out.

Jubn is also part of a pair of sweet sandwiches in which it’s served with strawberry jam or a sweet tahini on a French roll. There are also options like a shaak-shooka with sahawik, as well as a Yemeni take on fool, a fava-bean-anchored mix of garlic, green onions, cilantro, and sahawik. The best of the beverages are its full list of fresh smoothies, and, as is always the case at Hamtramck’s sandwich shops, the flavor comes at a bargain — each sandwich is under $7.