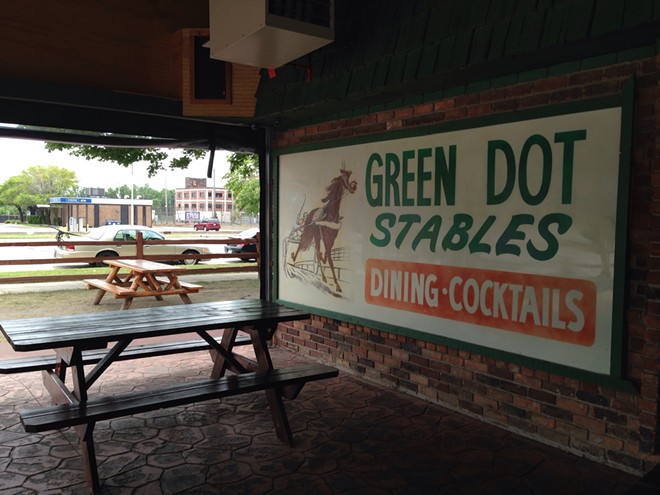 Detroit bar and restaurant Green Dot Stables has been the center of protests recently following the firing of Christine Turner, a 34-year-old Black woman who said she was let go after making a joke to a co-worker about "light-skinned motherfuckers."

After initially declining to comment, the restaurant released a statement on its Facebook page Monday morning in which it doubled down on its decision to fire Turner, saying the reason for her termination is because she violated company policy numerous times.

"The current narrative regarding what happened is simply not accurate," the company wrote. "During this employee's seven shifts of employment, this individual engaged in a string of unprofessional conduct towards multiple employees of different races/national origins and sexual orientation. Despite counseling, the behavior did not change."

Turner, a former server at the restaurant, told Deadline Detroit that she was fired after she made a joke to a cook about "light-skinned motherfuckers," referring to the stereotype of light-skinned Black people being "uppity." She said both she and the Cook are light-skinned, but some white co-workers overheard the comment and took offense to it.

The company did not offer specifics about Turner's other alleged comments. It says it decided to release a statement after receiving threats directed at its staff.

The protests, which include calls for a boycott, have been promoted by a group called Detroit Solidarity Movement, which has accused Green Dot Stables of "occupying Black spaces serving white fragility" and "culturally appropriated sliders with a side of gentrified fries," according to posts on its Instagram account.

At Green Dot Stables, our company’s strength is our inclusive and respectful environment for our customers and employees. This requires everyone who works at Green Dot to uphold our values concerning the treatment of our employees and customers.

Recently, disciplinary action was taken against an employee for multiple instances of violating our written policy against harassment. When this private personnel matter became public, we were brief in our initial comments out of respect for the privacy of the individual and the remainder of our staff. This individual initially asked for communications to be made directly to an attorney, which we chose to respect. Unfortunately, during our silence, there have been multiple instances of harassment and threatening comments directed to other members of our staff.

The current narrative regarding what happened is simply not accurate. During this employee's seven shifts of employment, this individual engaged in a string of unprofessional conduct towards multiple employees of different races/national origins and sexual orientation. Despite counseling, the behavior did not change.

As we have emphasized in the past (and will continue to do so in diversity, equity and inclusion training) any biases, stereotyping, or actions that create an intimidating, offensive or hostile experience for our employees or customers will not be tolerated.


The restaurant is owned by Jacques and Christine Driscoll, who are both white. They also own Johnny Noodle King and Yellow Light Coffee & Donuts.