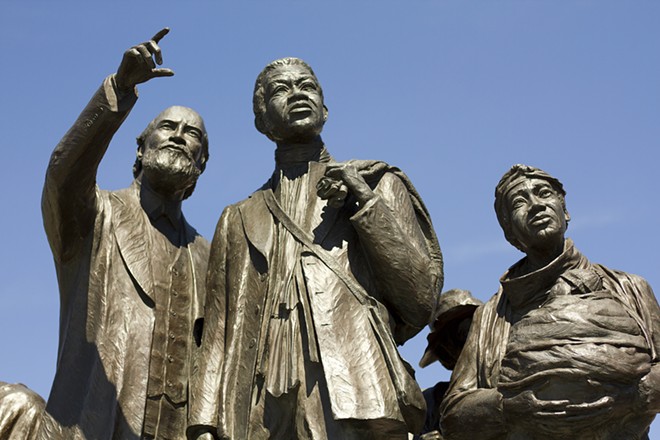 The sculptor of a large bronze monument in Hart Plaza that commemorates Detroit’s role in the Underground Railroad believes the statue was vandalized and worries about further damage.

The 20-year-old Gateway to Freedom International Memorial, which overlooks the Detroit River, is cracked, and its granite base is damaged.

“Somebody took a sledgehammer to the granite wall and tried to pry off the corners with a crowbar,” internationally renowned sculptor Edward Dwight said in a statement. “It also looks like the renovation work on Hart Plaza may be making the soil shift and is oozing dirt out through the base of the Monument causing the granite to buckle.”

The city is renovating Hart Plaza.

The Michigan Underground Exploratory Collective (MUREC), a Detroit nonprofit, has postponed its plans to hold a 20th anniversary celebration of the statue in October. The monument depicts six runaway slaves awaiting transport to Canada and features George DePaptist, a Detroit activist who helped slaves cross the river to freedom.

“This beautiful but now damaged bronze artwork is known throughout the nation,” Richard Smith, a distant cousin of DePaptist and a member of the collective, said in a statement. “To have this Michigan Monument and symbol of freedom defaced is profoundly disappointing and must be addressed by all.”

Trouble is, activists aren’t sure who is responsible for fixing the monument.

Metro Times is awaiting a response from Mayor Mike Duggan's office, which is looking into the issue.

The International Underground Railroad Collective and Detroit 300 gifted the monument to Detroit on its tricentennial celebration.

In 2011, the Detroit Economic Growth Corp. paid to clean and repair the monument after someone had tampered with it.