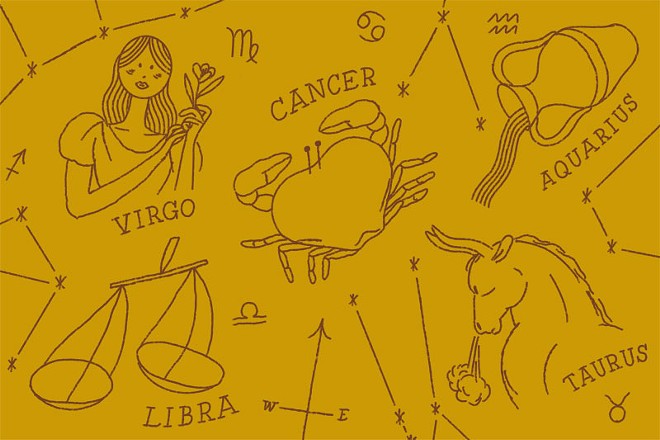 ARIES: March 21 – April 19: In one of her poems, Emily Dickinson tells us, "The pedigree of honey / Does not concern the bee; / A clover, any time, to him / Is aristocracy." I suggest you be like Dickinson's bee in the coming weeks, my dear Aries. Take pleasure and power where they are offered. Be receptive to just about any resource that satisfies your raw need. Consider the possibility that substitutes and stand-ins may be just as good as the supposed original. OK? Don't be too fussy about how pure or prestigious anything is.

TAURUS: April 20 – May 20: A fan once asked composer Johann Sebastian Bach about his creative process. He was so prolific! How did he dream up such a constant flow of new music? Bach told his admirer that the tunes came to him unbidden. When he woke up each morning, they were already announcing themselves in his head. According to my analysis of the astrological omens, Taurus, a comparable phenomenon may very well visit you in the coming weeks — not in the form of music, but as intuitions and insights about your life and your future. Your main job is to be receptive to them, and make sure you remember them.

GEMINI: May 21 – June 20: "I love unmade beds," writes Gemini poet Shane Koyczan. "I love when people are drunk and crying and cannot be anything but honest. I love the look in people's eyes when they realize they're in love. I love the way people look when they first wake up and they've forgotten their surroundings. I love when people close their eyes and drift to somewhere in the clouds." In the coming days, Gemini, I encourage you to specialize in moments like those: when you and the people you're interested in are candid, unguarded, raw, vulnerable, and primed to go deeper. In my opinion, your soul needs the surprising healing that will come from these experiences.

CANCER: June 21 – July 22: Trailblazing psychologist C. G. Jung said his loneliness wasn't about a lack of people around him. Rather, it came from the fact that he knew things that most people didn't know and didn't want to know. He had no possibility of communicating many of the interesting truths that were important to him! But I'm guessing that won't be much of a problem for you in the coming months. According to my astrological analysis, you're more likely to be well-listened to and understood than you have been in quite some time. For best results, ASK to be listened to and understood. And think about how you might express yourself in ways that are likely to be interesting and useful to others.

LEO: July 23 – August 22: The French government regularly gives the Legion of Honor award to people deemed to have provided exceptional service to the world. Most recipients are deserving, but a few have been decidedly unworthy. In the latter category are Panamanian dictator Manuel Noriega and Syrian dictator Bashar al-Assad, as well as drug-cheating athlete Lance Armstrong, sexual predator Harvey Weinstein, and Nazi collaborator Marshal Pétain. I bring this to your attention, Leo, because the coming weeks will be a favorable time to reward people who have helped and supported you. But I also suggest that you pointedly exclude those who have too many negatives mixed in with their positives.

VIRGO: August 23 – Sept. 22: In 2010, an American engineer named Edward Pimentel went to Moscow to compete in the World Karaoke Championship. He won by singing Usher's "DJ Got Us Falling in Love." His award: one million dumplings, enough to last him 27 years. I have a good feeling about the possibility of you, too, collecting a new prize or perk or privilege sometime soon. I just hope it's a healthier boon than dumplings. For best results, take some time now to clearly define the nature of the prize or perk or privilege that you really want — and that will be truly useful.

LIBRA: Sept. 23 – Oct. 22: I will love it if sometime soon you find or create an opportunity to speak words similar to what novelist D. H. Lawrence once wrote to a lover: "You seem to have knit all things in a piece for me. Things are not separate; they are all in a symphony." In other words, Libra, I'll be ecstatic if you experience being in such synergistic communion with an empathic ally that the two of you weave a vision of life that's vaster and richer than either one of you could summon by yourself. The astrological omens suggest this possibility is now more likely than usual.

SCORPIO: Oct. 23 – Nov. 21: Sometimes people don't like the provocative posts I publish on Facebook. They leave comments like, "You stupid idiot!" or "I hope you commit suicide!" and far worse. When I delete their messages, they become even more enraged, accusing me of censorship. "So you don't believe in free speech, you jerk?" they complain. I don't try to reason with them. They don't deserve any of my time or energy. But if I did communicate with them, I might say, "My Facebook page is my sanctuary, where I welcome cordial conversation. If you came into my house and called me an idiot, would it be ‹censorship' if I told you to leave?" I hope these thoughts inspire you to clarify and refine your own personal boundaries, Scorpio. It's a good time to get precise and definite about what's acceptable and unacceptable from the people with whom you engage.

SAGITTARIUS: Nov. 22 – Dec. 21: Have you ever kissed a monster in your nightly dreams? Have you won a chess match with a demon or signed a beneficial contract with a ghost or received a useful blessing from a pest? I highly recommend activities like those in the coming weeks — both while you're asleep and awake. Now is a good time to at least make peace with challenging influences, and at best come into a new relationship with them that serves you better. I dare you to ask for a gift from an apparent adversary.

AQUARIUS: Jan. 20 – Feb. 18: "It's a good thing when people are different from your images of them," wrote Aquarian author Boris Pasternak. "It shows they are not merely a type. If you can't place them in a category, it means that at least a part of them is what a human being ought to be. They have risen above themselves, they have a grain of immortality." I love that perspective! I'm offering it to you because right now is a favorable time to show that you are indeed different from the images people have of you; that you transcend all stereotyping; that you are uncategorizable.

PISCES: Feb.19 – March 20: You have personal possession of the universe's most monumental creation: consciousness. This mercurial flash and dazzle whirling around inside you is outlandishly spectacular. You can think thoughts anytime you want to — soaring, luminescent, flamboyant thoughts or shriveled, rusty, burrowing thoughts; thoughts that can invent or destroy, corrupt or redeem, bless or curse. There's more. You can revel and wallow in great oceans of emotion. Whether they are poignant or intoxicating or somewhere in between, you relish the fact that you can harbor so much intensity. You cherish the privilege of commanding such extravagant life force. I bring these thoughts to your attention because the time is right for a holiday I call Celebrate Your Greatest Gifts.

This week's homework: Send testimony or proof of how you've seized control of your own life. [email protected]