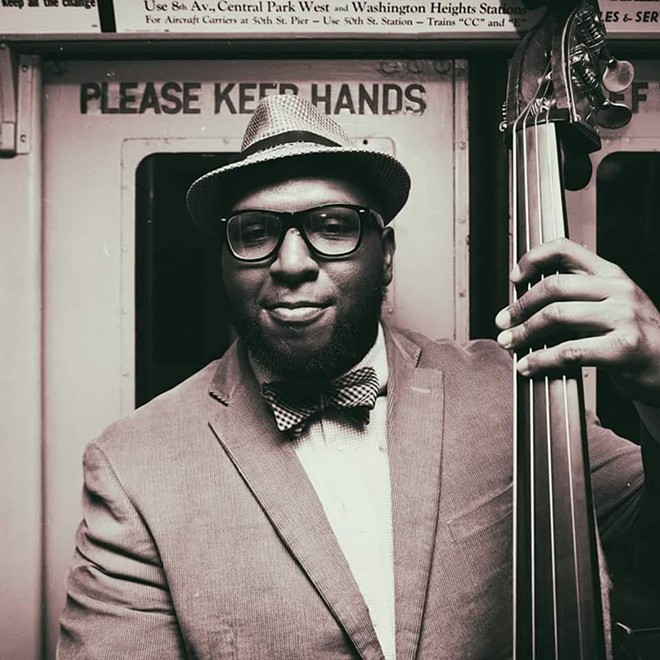 Last June, bassist Noah Jackson packed up his entire life and moved back to his hometown of Detroit. He spent years in New York as an in-demand jazz bassist, performing with his own band Full Circle and big-named jazz acts such as Branford Marsalis, Kenny Garrett, Christian Sands and Nnenna Freelon. He is also a key member of South African jazz pianist Abdullah Ibrahim's quartet. In between touring with Ibrahim and others, Jackson managed to appear in a few Weight Watchers commercials and become a competitive powerlifter.

Jackson developed a love for music, particularly jazz as a lad. He participated in the Detroit Symphony Orchestra’s Civic Jazz program when it was run by the renown jazz bassist Rodney Whitaker. Jackson continued to study with Whitaker at Michigan State University. He moved to New York where he earned a graduate degree at the Manhattan School of Music. With that experience under his belt, offers for work with various jazz bands opened.

If you've had the chance to catch Jackson in concert, after hearing him play a series of notes or run through a few choruses of a standard or an original composition, you’ll have a sense of why greats such as Irbahim and Marsalis offered Jackson steady employment. He’s a top-notch bassist with a natural ability to keep time as efficiently as a luxury watch. And he’s not a spotlight hog, but when the spotlight is cast on him, his soloing is as substantive and fluid as notables such as jazz bassists Richard Davis and Sam Jones.

That said, Jackson could’ve stayed in New York building his career, but there was a longing to return to Detroit. When the pandemic hit, he moved back to look after himself as well as his immediate family.

"I've always felt that Detroit was going to be a major factor in my life one way or the other, and that it was a major component towards my personal artistic identity," says Jackson from his home in Southfield. “It felt natural for me to return here in a time where there's a lot of uncertainty, there's a bit of certainty being here."

He was unsure about what musical prospect awaited him, but shortly after he settled in several choice opportunities surfaced. One was as the music director and artist-in-residence at Cliff Bell's, the popular jazz club and social gathering hub that closed temporarily last year in the wake of the COVID-19 pandemic. When the work slowed down last year, his cousin motivated him to get a real estate license.

"I always knew I wanted to expand in a way that can support what I do creatively and where I want to be financially and real estate seemed to be that perfect bridge point between the two," says Jackson.

In real estate he’s gained skills that he also uses in the entertainment business such as time management, finances, and contract negotiations — professional development skills he believes will aid in his role at Cliff Bell's.

As music director, Jackson is following in the footsteps of RJ Spangler, a veteran jazz drummer and bandleader, and former director at Cliff Bell's. Jackson played in Spangler's band Planet D Nonet while a college student, and he credits Spangler for hipping him to Abdullah Ibrahim’s music.

"I think Noah is the perfect man for the job. He’s an excellent musician. He spent time traveling around the world and now has come back home to Detroit. He knows the musicians here in town. I’m confident he will do a wonderful job at Cliff Bell's," says Spangler.

Jackson also has a long standing relationship with another former Cliff Bell's music director, Phil Salatrik, who approached Jackson about taking over as the new music director.

The position at Cliff Bell's will be a big challenge for Jackson and one he’s enthusiastic about tackling. There are not a lot of jazz artists who are in charge of booking at clubs, but Jackson sees his new role as a model that he believes, if done right, could be reproduced across the country and that will help elevate the status and creative integrity of the music.

Part of Jackson's plans as the new music director includes revitalizing the dance culture in Detroit so on Wednesday evenings during his residency at the club, he will have a jam session afterwards that will encourage people to get up out of their seats.

"I want to bring Detroit back into its prominence that most musicians around the world know it to be," he says. "But many people outside the music don't."