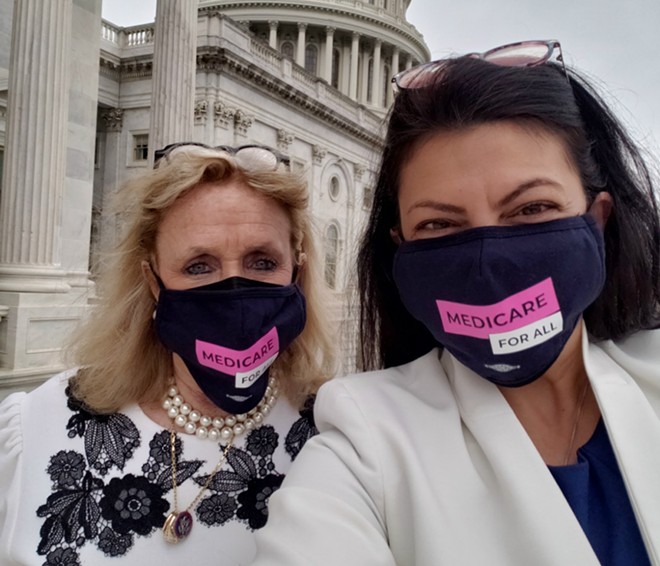 Progressive lawmakers are once again arguing for universal health care, and they say the COVID-19 pandemic has only strengthened their case.

On Wednesday, U.S. Representative Debbie Dingell (D-Mich.) co-led a virtual rally to unveil the Medicare for All Act of 2021. Dingell is a co-author of the bill, along with U.S. Rep. Pramila Jayapal (D-Wash.), and U.S. Rep. Rashida Tlaib (D-Mich.) is one of the bill's 109 co-sponsors.

"It was exactly one year ago that every single state across this country had a confirmed COVID-19 case," Jayapal said during the rally. "And in the 365 days since, the case for Medicare for All has never been clear. The pandemic has taken the lives of over 538,000 people. It has devastated our community. It has left too many with surprise bills, and millions of Americans have lost their health insurance altogether, simply because they lost their jobs. And though this devastating pandemic has shined a bright light on our broken for-profit healthcare system, we also know that we were already leaving nearly half of all adults over the age of 65 uninsured or underinsured before COVID-19 hit. And that was happening while we paid double more per capita for health care than any other country in the world."

The cause has more momentum this time around, with more co-sponsors than the last time it was introduced to Congress, including more than half of the House Democratic Caucus, 14 committee chairs, and a number of key leadership members. The lawmakers say they also have grassroots support from more than 300 local state and national organizations representing nurses, doctors, business owners, labor unions, and racial justice organizations.

"Our movement is growing," Jayapal said.

The Medicare for All Act of 2021 would guarantee health care to everyone in the United States by creating a government-run health care program, expanding Medicare to provide comprehensive benefits to everyone including primary care, vision, dental, prescription drugs, mental health, substance abuse, reproductive health care, and more. The supporters say it would allow patients to choose doctors or health care providers without worrying about whether they're in-network, lower drug prices, lower costs by reducing administrative waste, and lessen the burden of health care on business owners.

"I didn't realize how broken the system was until I became a caregiver, and I'm supposed to be able to navigate this system," Dingell said. "And the days that I would be in tears, banging my head against the wall, trying to make it work, was an educational experience in and of itself."

But the pandemic, which has caused millions of people to lose their jobs and their health care benefits, has made the problems with the U.S. health care system even more pronounced.

"Even people who knew we needed a Medicare for All have just seen it in such very stark circumstances," Dingell said. "Nearly 30 million Americans are uninsured, and that these 40 million Americans can't afford the cost of the copays or deductibles."

She added, "The quality of our healthcare is worse than any other industrialized nation. We spend more per capita than anybody, our life expectancy in the us is lower than most other nations ... and our infant mortality rate is higher. And we are the only industrialized country in the world that does not guarantee all the good citizens health care access to healthcare."

Saying she's a "car girl" from Michigan, Dingell put the issue in terms to appeal to her Republican colleagues. "We're competing in a global marketplace where we are at a competitive disadvantage in this country because the governments of Germany, Japan, and the other carmakers cover healthcare, and our companies have to pay for that," she said.

U.S. Rep. Tlaib also spoke in auto industry terms. "I'm proud of my UAW father, who with only fourth grade education was able to start at Ford Motor Company. Because of the union, because there was the power to organize, he was able to access healthcare."

But today, many people in the Motor City have poor access to health care.

"I represent portions of Wayne County in Michigan, where one in five of my residents are in poor or fair health," Tlaib said. "In Wayne County, we saw more than 7,000 preventable hospital stays, or a 100,000 people in 2017. Medicare for All would turn this around. Our current system is subjecting our neighbors — we all have seen it, especially our communities of color — to undue harm and death. Implementing Medicare for All would bring endless opportunities, wellbeing, and improved quality of life to many of our neighbors. It's more affordable, more equitable, and more accessible way to deliver health care and coverage."

According to Tlaib, medical bills contribute to more than 60% of all bankruptcies. "Those that have filed bankruptcy is due to the fact that they lacked health insurance at a time that they were actually sick," she said, adding, "People are being forced into poverty and are dying because we have not said 'enough.' Putting profits before our people, we have allowed the corporate schemes and allow the private insurance industry to gaslight our colleagues to believe 'nothing is the right approach. Well, today we are saying that with the re-introduction of the Medicare for Act, we are saying enough, we're not going to wait anymore. Our families have been waiting too long. Today, we are saying during a global public health crisis, that we must have comprehensive health care coverage. Today, we are making it clear that Medicare for All is a path forward, and we are done with the do-nothing approach."