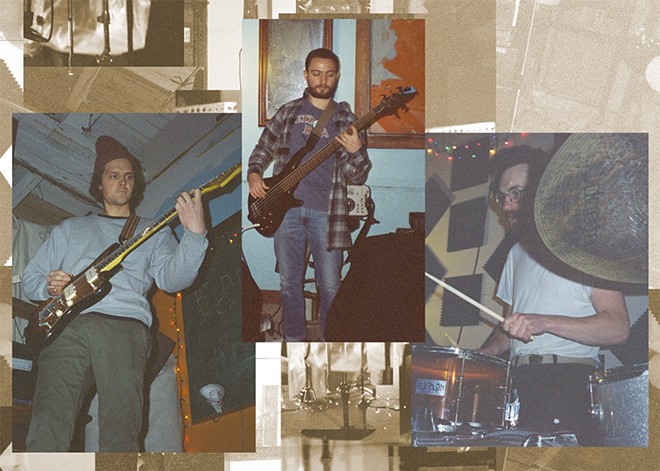 Don't let the carefully crafted, contemplative, and deeply introspective art-punk of Alluvial Fans fool you. Behind the playful brainwashing (and we do mean playful), the frequent droning on about Taoism (also playful), out-there ideas about ghost-detecting cats, and not-so-out there thoughts on the state of civilization is a rock band. Just a great fucking rock band.

Drew Bartosik (guitar, lead vocals), Gilad Granot (bass, FX synthesis,) and Ollie Elkus (drums, vocals) are Alluvial Fans, the caffeinated rock band whose origin story is a cross between romantic comedy and the chance meeting between Daryl Hall and John Oates that is worthy of its own story altogether. Though Bartosik started writing music for the band's 2015 debut, Lag Air (without bandmates), the group formally assembled a few years later and, in 2020, the trio released their second record, Earth to Astronaut. (Yeah, OK, so we're a little late to their party, but they said they forgive us.) As it turns out, they already have a third record in the bag and have a lot to say about, well, a lot of things.

"It's definitely technology," Bartosik says of his songwriting on Earth to Astronaut. "But it comes from my reverence for ecology, and obviously, wanting to heal the Earth of the sort of ecological death spiral it seems that we're in. I've learned to not let this anxiety be such a crushing force. Whether it's a cultural isolation, or social or personal isolation, you know, in terms of the pandemic, or in terms of things like police brutality, or climate change, nuclear war, like, really not allowing it to suppress your psyche. We have to resist that as much as we can. So we find healthy avenues, especially art and friendships," he says. "I think those are the two main things that have been keeping me going through this, and I actually see them as forms of resistance."

The record opens with the line "There's a paradox in the paradigm" on the track "Cult of Paradise," one of several moments that manage to collapse much of Alluvial Fans' personal and creative philosophy into a punchy line. Another is the track "Blowout/Future Games," which explores the concept of "what you produce produces you" and "what you consume consumes you." And then there's the Primus-sounding "Falafel," which serves as an instrumental ode to the official food of Alluvial Fans' rehearsal and writing sessions.

By the time the band had planned to release Earth to Astronaut and a tour to support it, Elkus says, they were preparing to get going on the third. Despite the pandemic, they moved forward with the release as planned, but the band opted for zero fanfare as world events played out.

"The Black Lives Matter protests had just started, like, the whole movement really happened when we were preparing to release the album," Elkus says. "And so we didn't want to take up any space."

Bartosik says that pushing a record at that point was insignificant.

"So we just put it out and donated all the money to charity and — it wasn't much, you know, but it speaks to a more general point about I don't think we were expecting to blow up, musically, like we're not. I'm certainly not looking for any adulation. I've learned that I make music for the process. And it's really a psychological form of growing and healing and understanding myself, and I value that more so than any sort of commodification or, you know, monetization of this thing that I see as a spiritual part of me and spiritual part of existence," he says. "I would never want to bastardize that for myself."

Granot, who is described by his bandmates as being naturally introspective, has used the pandemic to recalibrate and have reckonings with himself as an artist and as an individual.

"The pandemic was a way for me to look inward and kind of improve and address demons that I'm dealing with or have dealt with for my entire life," he says. "Because it's like, I just have my meat body to deal with on a day-to-day basis. And I have to just keep that thing going," he says, adding that though he admits it might be pretty "sick" to win a Grammy, he echoes Bartosik's beliefs and says the fact that his roommate often gets Alluvial Fans songs in his head is far more meaningful than widespread recognition.

"I think the issue of like, making it as a musician at this point is complicated by the fact that, like, so many more people have access to the tools to make music happen," he says. "And it's kind of just a cathartic, selfish thing that we do. Not selfish in a bad way. Just something for ourselves ..."

While we may have to wait a while until Alluvial Fans can practice self-love (not like that, you freaks) with tentative plans to record the upcoming record in April, they recognize the need for recognition as an artist stems from a more primal and existential place.

"Fundamentally, it's existential, you know, we are seeking validation," Bartosik says. "And this recognition is a form of validation that says you're not alone, I recognize that you have something worth giving my attention to and that attention is what we all crave. There's lyrics as part of 'Test the Water,' which is like, 'sex, money, and drugs are never enough/ but I just need attention.' I think that's what we crave more than anything as humans, and it's fundamental to our human condition, and times are so existential right now. It's like, we're all coping and just trying to get by."