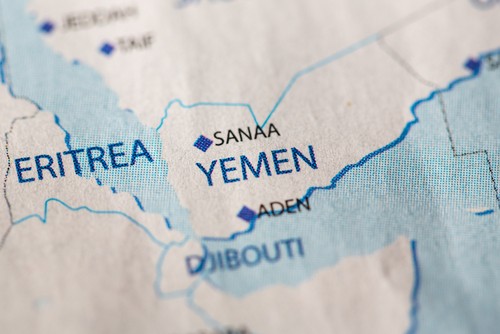 Given all the protests against President Donald Trump’s travel ban last month, we at Metro Times are confused by one major disconnect: If arguments about Trump’s immigration bans concern protecting us from terror, why do they hurt the very people fleeing from terror, especially where U.S.-made bombs and bullets are flying around.

It’s what you call “cognitive dissonance,” right? We send the bullets and bombs by ship (billions of dollars’ worth for Saudi Arabia), by proxy (military aid for Israel), and we even deliver our bombs and bullets ourselves (the recent joint UAE-U.S. force that saw SEAL Team 6 in a tight spot). But when it sends people running like hell, seeking a more stable life in the West, that’s when we’re supposed to worry that they might be terrorists.

It’s not very sporting to do so. It’s sort of like burning down a hotel and then saying the guests running out of the inferno were probably arsonists, every last one of them.

One of those countries where the United States has a hand in the conflict is Yemen, where a lopsided civil war has been raging for years, with the Saudi Arabians fighting against the Houthi rebels, thanks to a generous supply of arms from Washington. Bahrain and the United Arab Emirates are in on it too. So it’s sort of strange to think that the U.S. military, which got its start kicking King George’s keister back to Cornwall, is now fighting side by side with all the king’s men.

These are, of course, all finer points if you already know that the United States has done to the Middle East what the English rock band the Who used to do to hotel rooms. Except the Who never left 1.3 million people dead. (Deaf, maybe.)

But we’d wager that the people most likely to support Trump’s initial travel ban think that the United States has entered the Middle East and transformed it into something like Disneyland, and people aren’t fleeing this new utopia so much as rushing to the West in hopes of reducing Christendom to a burnt, smoking cinder.

Which is why on major corrective would be to understand what is happening on the ground in the Middle East. Kind of a shocker to actually point that out, right? Well, there is a new speaker series started in the international city-within-a-city of Hamtramck to delve into just such issues. It’s called the Hamtramck Monthly Forum, and this month’s event will focus on just what’s happening in Yemen.

This event will feature actual special guests familiar with the region. Author and activist Phyllis Bennis, who directs the New Internationalism Project at the Institute for Policy Studies, has even written a book on the subject, Understanding ISIS and the New Global War on Terror: A Primer. She’ll provide hard-won information, and will sign copies of her book at the end of the event. Also making an appearance will be Yemeni journalist Latifa Ali, a reporter, human rights activist, and a member of several charitable and nonprofit organizations.

If you can’t go, (or, heck, even if you can: It might even make good preparation for the discussion) have a look at this half-hour documentary on the situation there to see what your tax dollars are doing, the woman-hating religious extremists they’re doing it with, and why any reasonable person would run as fast as their legs can carry them.