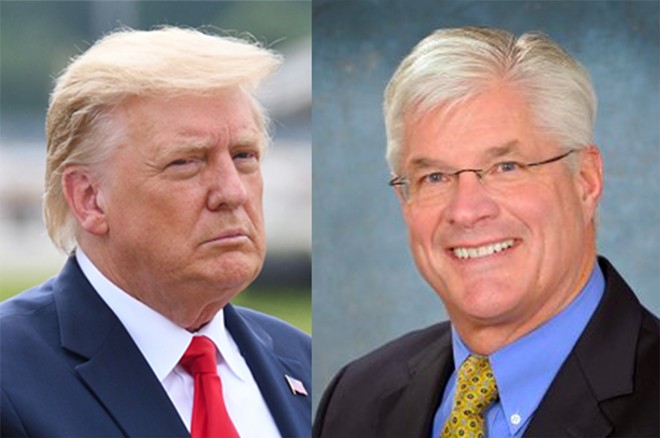 Michigan state Sen. Mike Shirkey and former Rep. Lee Chatfield rightfully earned criticism for agreeing in November to fly to Washington, D.C. to meet with President Donald Trump, who has been pressuring public officials to change the election results ever since he lost his re-election campaign.

At the time, the Republican legislators said they met primarily to discuss federal coronavirus aid for Michigan, but Trump, as usual, seemed to spill the beans on Twitter, responding to their statement by saying, "We will show massive and unprecedented fraud!" Plus, a bombshell recording recently released by the Washington Post showing Trump pressuring Georgia's Secretary of State to "find 11,780 votes" suggests that more than COVID-19 was on the agenda for the Michigan legislators. Shirkey even admitted he was "expecting" Trump to ask them to interfere in the election, and said he and the other Michigan Republicans who joined the meeting were "delighted" that he had not.

Regardless of what actually went down in D.C., Shirkey and Chatfield seem to have done no good by humoring Trump. On Monday, Trump's campaign indicated it wasn't through with them yet by tweeting out their contact information and urging supporters to call on them to decertify Michigan's election results.

For their part, Shirkey and Chatfield have repeatedly said they would follow Michigan's election laws, and Chatfield even warned that if the state's Electoral College electors decided to cast their votes for Trump instead of winner Joe Biden it would be an unprecedented move away from democracy and "we would lose our country forever."

Here's the thing, though: Chatfield's term ended on Dec. 31. Plus, the Trump campaign got his phone number wrong by one digit, resulting in Trump supporters harassing a random person in California — and refusing to believe them when they said they weren't Chatfield.

"I want these people to realize that they can't just find something on Facebook and call a number they found", the person told The Washington Post, adding, "This is the dumbest thing that ever happened to me personally."

Let's pause here for a second. The Trump campaign and its supporters, which have repeatedly alleged without evidence some sort of massive election fraud 1) isn't even paying close enough attention to realize Chatfield is no longer in office and 2) can't even be bothered to verify his phone number. Plus, the erroneous tweet is still posted.

Why should we take anything they say seriously?

Shirkey did not immediately respond to a request for comment, and Chatfield couldn't be reached because he no longer has a public email address. But we're guessing they thought that by agreeing to meet with Trump, he would stop harassing them.

What they, and all of us, should know by now is that there is no bottom with Trump.