The worst people of 2020 (who aren’t Trumps), continued 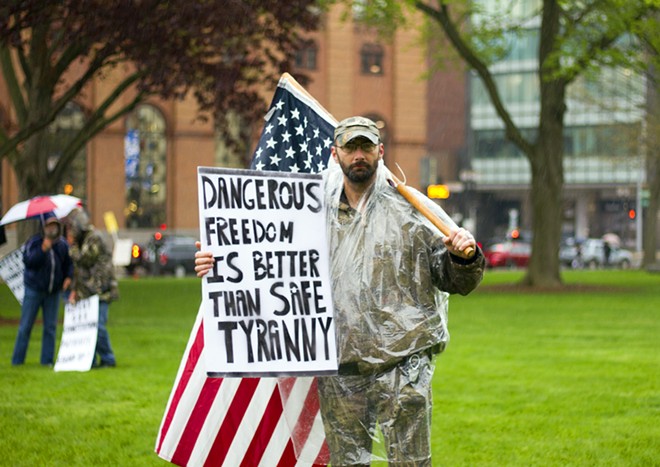 Welcome to Part 2 of the Worst People of the Worst Year Ever (who aren't named Trump). In part 1, we lifted our leg on the seditionists who undermined democracy and the authoritarians who made a mockery of the constitution. To cap off our rogues gallery, this installment raises a glass (of antifreeze) to the criminally negligent COVID deniers and a potpourri of shitheads we'd just as soon drop off the face of the earth.

DR. SCOTT ATLAS. Few people provided pseudo-scientific cover for Donald Trump's sociopathic indifference to the pandemic like Atlas, a radiologist who fell into Trump's orbit via (what else) appearances on Fox News and eventually became his special COVID adviser by telling Trump what he wanted to hear — herd immunity, open everything, masks don't work, etc. Atlas had no training in infectious diseases or public health, yet the White House took his quackery seriously. We'll never know how many people died because of it.

FLORIDA GOV. RON DESANTIS. Nowhere has DeSantis's leg-humping obsequiousness toward Trump been more apparent than with the coronavirus, which has killed more than 20,000 of his state's residents. Following Trump's lead, DeSantis dismissed the virus's dangers. His health department stopped talking about it. He forbade local governments from enforcing mask mandates and capacity restrictions. He reopened businesses in early May and boasted of how he'd tamed the pandemic without "draconian orders." (Two months later, Florida was the virus's global epicenter.) His minions (allegedly) fired an analyst who refused to manipulate COVID numbers, then the state cops raided her house. He hired an Ohio sports blogger and COVID conspiracy theorist as a data analyst. He blocked newspapers and academics from accessing records and hid federal warnings ahead of Thanksgiving. And I'd be remiss not to mention that DeSantis wants to give the state's George Zimmermans license to kill anyone they think might vandalize a business. What could go wrong?

PANDEMIC RESTAURANT DINERS. Sure, you're fine — you sit outside, respect the waitstaff, tip well, and mask up. But you're in the minority. A recent survey of hospitality workers in New York, Massachusetts, New Jersey, Illinois, Pennsylvania, and Washington, D.C., not only showed that food-service workers are at greater risk of COVID exposure, but 41% noticed a significant change "in the frequency of unwanted sexualized comments from customers," and 25% said they "have experienced or witnessed" increased sexual harassment. Adding insult to injury, 83% said they've seen their tips decline, and 66% said they've seen their tips decline by at least half. Folks, this isn't hard: If you can't dine out in-person without being a cheapskate superspreader dick, get takeout.

THE REOPEN ASSHOLES. For a brief moment this spring, we all seemed to understand that this new, unknown virus demanded a serious response despite the economic hardship. The consensus lasted about a month. By late April, the same rich assholes who ginned up the Tea Party were fomenting the ReOpen movement, an astroturf rebellion egged on by the president that aimed to turn a public health crisis into a political opportunity by charging swing-state Democratic governors with tyranny. In North Carolina, some ReOpeners marched through downtown Raleigh with rifles, then went to Subway. In Michigan, heavily armed protesters stormed the Capitol menacing lawmakers. Later, militia members plotted to kidnap Gov. Gretchen Whitmer. (Honorable mention: Though they cleared the low bar of not facilitating Trump's coup, Michigan Senate Majority Leader Mike Shirkey and House Speaker Lee Chatfield refused to ban weapons in the Capitol, with Shirkey calling it "cowardly" to not want to be shot while doing your job. And hours after the kidnapping plot against Whitmer came to light, Shirkey and Hatfield appeared at an anti-Whitmer rally.)

JEFF BEZOS. More than 20 million Americans are on unemployment assistance, and an eviction crisis looms. But in the first seven months of this national emergency, the net worth of America's 614 billionaires grew by $931 billion, and none more than Amazon's Jeff Bezos, who added more than $90 billion to his fortune, nearly doubling his wealth. (The U.S. government spends $68 billion a year on food stamps.) At the same time, he hired Pinkerton spies to prevent his low-wage warehouse workers from organizing. Just because Trump hates him doesn't mean he's a good guy. (Honorable mention: Elon Musk, whose net worth jumped 277% during the pandemic, responded to California's COVID restrictions by moving to Texas. Mark Zuckerberg's wealth nearly doubled while his website facilitated right-wing disinformation. And the rich, who should be eaten.)

U.S. SEN. RICHARD BURR. Being chairman of the Senate Intelligence Committee means you know things before everyone else — and if you're North Carolina's Richard Burr, a chance to profit from other people's misery. On Feb. 13, with his committee receiving top-secret coronavirus briefings — and just a few days after Burr co-authored an op-ed assuring Americans that the government had everything under control — Burr dumped up to $1.7 million in stock holdings, most of his net worth; that same day, his brother-in-law unloaded up to $280,000 in stocks. A week later, the market crashed. Burr is now under federal investigation. (Honorable mention: No list would be complete without Mitch McConnell, who broke his own made-up rule to ram through the Supreme Court confirmation of Amy Coney Barrett without blinking at the blinding hypocrisy.)

PAULA WHITE. It's only fitting that Donald Trump's "spiritual adviser" is a private-jet-setting, prosperity-preaching charlatan who loves the Lord almost as much as the donation plate. Paula White earned her place on this list the day after the election when, in a live-streamed service at her Florida church, she babbled incoherently — sorry, "spoke in tongues" — while calling on "angelic reinforcements" to ensure Trump's "victory." "I hear a sound of victory," she said. "The Lord says it is done. For angels have even been dispatched from Africa right now. ... In the name of Jesus from South America, they're coming here." Guess they got lost.