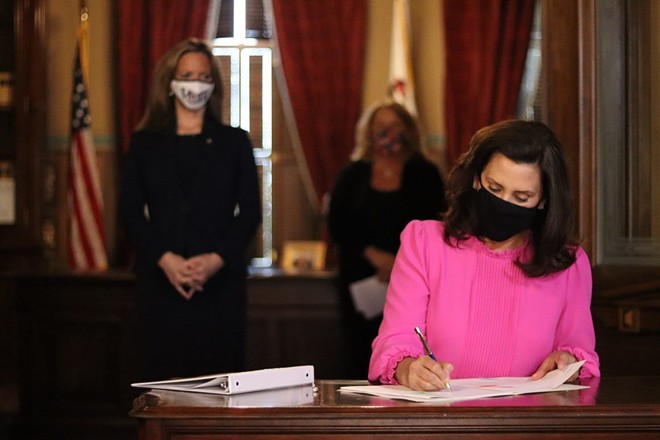 Gov. Gretchen Whitmer plans to sign a sweeping package of bipartisan bills on Monday that would automatically expunge criminal records for as many as hundreds of thousands of Michigan residents.

The “clean slate” legislation will create more expungement opportunities for people who have gone several years without another conviction. The idea is to make it easier for people with criminal records to get jobs, housing, and other opportunities.

Michigan will join three other states — California, Pennsylvania, and Utah — that have automatic expungement laws. But Michigan will be the first to automatically clear records involving low-level felonies.

The state Senate approved the legislation last month. The House passed the bills in November.

Supporters of the bills say the current expungement process is too cumbersome, costly, and restrictive.

“Michigan’s clean slate bill will pave the way for hundreds of thousands of Michiganders to finally be liberated from the lifelong stigma and barriers that accompany a criminal record,” Rebecca Vallas, senior fellow at the Center for American Progress, said in a statement. “And the passage of this remarkable package comes as removing barriers to employment is more urgently needed than ever amid COVID-19.”

The bills will create an automated system to erase up to two felonies and four misdemeanors without an application. Misdemeanors would be cleared seven years after sentencing, and felonies would be expunged 10 years after offenders complete their sentence. Offenses that won’t be eligible for expungement include assaultive crimes, human trafficking, serious misdemeanors, “crimes of dishonesty” such as forgery, felonies that carry a maximum penalty of 10 or more years in prison, and crimes in which the victim is injured or is a minor or vulnerable adult.

Under one of the bills, people convicted of a misdemeanor marijuana offense can apply for expungement to make the process quicker.