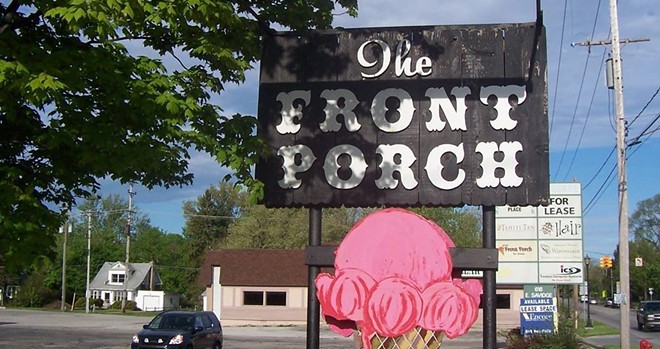 Another Michigan business has had to deal with unruly customers who can't deal with Michigan's mask mandate.

The owners of the Front Porch ice cream shop in Spring Lake had to call the police on Saturday after customers threw a fit over their requirement to wear masks inside their store.

The company took to Facebook to address the incident.

"These aren't our rules but we are mandated by the health department to follow them," the company wrote. "Just yesterday 4 different sets of people yelled at our workers and one set got so unruly that we had to call the police."

According to MLive, the customers left when police arrived.

"Wearing a mask is not a political statement in our store," the company said. "It's what we have to do to survive today."

Michigan residents have been asked to wear masks at indoor businesses since April, when coronavirus cases surged. Earlier this month, Gov. Gretchen Whitmer signed an executive order making masks mandatory both indoors and in crowded outdoor spaces, with businesses ordered to enforce the rule by refusing service to those who aren't wearing them. Violators could be fined $500. (There are few exceptions, like serious breathing health concerns.) Whitmer and other leaders have started a "#MaskUp" campaign to promote mask use.

But there have been a number of cases of customers turning unruly — and in some instances, violent — after being told to wear masks.

In Michigan, at least two deaths have been linked to altercations stemming from arguments over wearing masks. In May, a security guard at a Flint dollar store was shot after telling a customer that her child had to wear a mask before entering the store. Earlier this month, a man stabbed a 77-year-old man after they got in an argument in the parking lot of a Lansing-area Quality Dairy over wearing masks. Also in July, a man at a Meijer store in Northern Michigan pulled a knife on a clerk when she asked him to wear a mask.

The owner of the Pronto Pup corn dog stand in Grand Haven sparked controversy this month after going on a wild, meandering tirade against masks, Whitmer, Black Lives Matter, and other topics on Facebook.

Leaders who were initially against masks are now urging people to wear them, including Texas Gov. Greg Abbot and even President Donald Trump, who long refused to be photographed wearing a mask. He has now called for Americans to wear them.

"We're asking everybody that, when you are not able to socially distance, wear a mask," Trump said earlier this month at White House news briefing. "Whether you like the mask or not, they have an impact, they have an effect, and we need everything we can get."

Experts at the Centers for Disease Control and Prevention are now saying that the U.S. could get the coronavirus crisis under control within two months if everybody wore masks.

You can read the full post from the Front Porch ice cream shop below.